Family-Friendly Fun in the Southeast
You are here: Home / Adventures / Walking With Spirits: A Ghost Tour of St. Augustine

The Haunted City of St. Augustine

The third most haunted city in the United States (Charleston holds 1st place honors with New Orleans coming in a close second) nestles on Florida’s Atlantic Coastline in Matanzas Bay. St. Augustine, the oldest city in the continental U.S., offers a myriad of tours to enlighten visitors of their encroaching spirits. My sister and I decided to test the fates and signed up for The Original Ghost Tours of St. Augustine (their outlet was in the hot pepper shop at the top of St. George’s Street by the city gates). 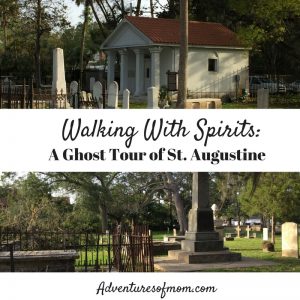 Dressed as a pirate wench, our guide, Stormy Gail, led us through the back streets of the old city, a candlelit lantern in hand. She informed us that their guides are only allowed to tell the tales of officially documented ghosts (yes, really) Makes me wonder how many unofficial ghosts are wandering about! But as yellow fever took every second person to an early grave, there are many tales to be told.

My sister had taken this tour once before with a different guide, but told me that she had gone down different streets, so not every tour is the same. You can catch my sister’s actual photo of a ghost– that paid us a visit en route during our tour on her website. Gail encouraged everyone to take photos and kept saying the camera is quicker than the eye, and others in our group captured odd images of spirits during our walking tour that night.

Walking With Spirits in the Oldest City 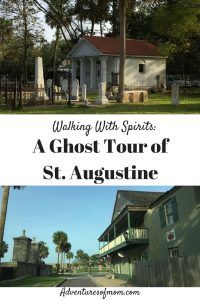 I must confess, that I did feel a rather cold gust of wind around my ankle near one of the graveyards as Gail told some of her tales, but I put it off on the weather, but then the tour took us near another graveyard that a young boy haunted. Gail’s tale of the ghost of James laid to rest a mysterious encounter of mine seven years prior.

My Own St. Augustine Ghost Encounter

My husband and I stayed at a bed and breakfast by James’ graveyard 7 years ago. We had sat on the top floor balcony and watched the groups of walking ghost tours come and go-but couldn’t hear their tales from our spot. Our 3-month-old son was with us and we shared a giant bed in the front bedroom (closest to the graveyard).It was a beautiful old house and a balmy August evening.

It was about three or four in the morning when I heard a child laughing- happily. As a new mom, I was all alarm mode- ready to waken at the slightest sound of our baby, so the sound woke me up immediately.

Our son lay sound asleep, and so was my husband. I heard the laugh again- happy and eery in the stillness of the night. The hair on my arms stood on end as I scanned our darkened room for the source- but found no one. I cuddled up around my child and husband- a bit closer than before and said a prayer before drifting back to sleep.

I remember saying to my husband the next morning “I didn’t think there were any other children staying here.”  I even asked the owner about other children- and he said our baby was the only one staying there.

Over breakfast, the proprietor told us that people heard all sorts of things here- but never once mentioned ghosts. Bad for business, I guess. Now seven years later, during my ghost tour,  I learned my happy laughing child was the young ghost of James,  a young ghost who is often heard playing around the graveyard, and sometimes tries to get others to play with him… one of the Official Ghosts of St. Augustine!

Rub elbows with the spirits on your next visit to St. Augustine during a walking ghost tour and don’t forget to bring a camera!

More Stories That May Interest You:

Previous Post: « The Time Traveler’s Life: St. Augustine Adventures
Next Post: Pirate Treasure or Junkyard Fodder: Searching for the Past on Amelia Island »