Family-Friendly Fun in the Southeast
You are here: Home / Adventures / Swimming with Dolphins at Fort De Soto

My kids got their first close encounter with wild dolphins and it was far better than any ring side seat a marine park could offer. It was just us and the dolphins- and boy did they put on a show!

We took a day trip to Fort De Soto (Florida). My husband has been dying to go fishing for ages (it’s in his blood). Me, just give me the sea- I usually end up running after the kids anyhow. My fishing license expired when my son (now six) was able to walk. There hasn’t been much point to renewing it, as my daughter came soon after and I am still squeamish about live bait, let alone taking the caught fish off the hook! So, when my husband suggested we go to the beach- where he could fish and we didn’t have to, well, I jumped at the chance. 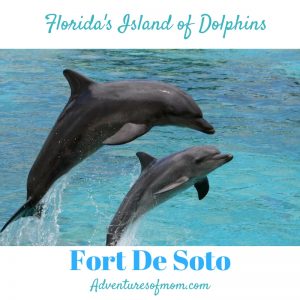 We drove through the rain on our way towards Tampa (it has been raining every day in Florida now), but luckily, we drove out of it as well and headed south to Fort Desoto Park in Pinellas County. My husband and son, loaded down with poles and tackle box, stomped out on the fishing pier while my daughter and I hit the softer sugar sands of the nearby beach.

The Gulf waters around the Fort De Soto islands are crystal clear- so beautiful it hurts your eyes- glistening and glittering like jewels under the brilliant sun.

We walked past the NO SWIMMING: RIP TIDES signs. There were only a couple of other people on the beach, and no one in the water- hmm, must have been the signs. My daughter cannot resist water, so we were wading in before we knew it. Minutes later we spotted the dolphins- there must have been ten of them- some with babies! They were flipping around near the end of the fishing pier.

Wild Dolphin Encounter in the Gulf of Mexico 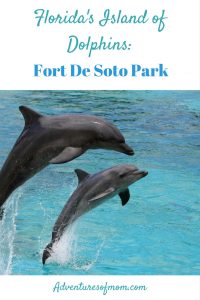 I knew my husband was cursing the sleek-bodied mammals as they sped and danced through the glittering blue gulf waters. Fishermen hate dolphins because they scare away the fish. I secretly suspect they are trying to “save the fish,” chasing them away from the tempting bait on the angler’s hooks.

My 3-year-old girl and I were loving the show these dolphins put on for us. We had a front row seat in fact! We stood in the water, squealing and squeaking the way we imagined dolphins talked- goodness knows what we said to them because three of them split from the big group and headed closer to the beach towards us!

Island of the Blue Dolphins

I remember reading a story when I was young about a girl and dolphins- Island of the Blue Dolphins I think, by Scott O’Dell. It was a good book, but sad. I really wanted to swim out and touch a dolphin (kinda like wanting to connect with that snake in the bushes the other day- seriously- where is my head?) But not wishing to risk the rip tides or put dear daughter at risk, I did not. We contented ourselves with watching the dolphins frolic and even flip out of the water- airborne acrobatics who clearly wanted to play! Our own island of blue dolphins- for Fort De Soto Park is a series of islands after all!

My son gave up on the fishing and raced down to the beach for a closer look at the dolphins. After a while, the children’s interest waned. Thoughts had turned to building a sand castle and finding as many shells as possible. The dolphins soon moved away but stayed in the area for most of the day (much to dear fishing husband’s chagrin).

The beach at the county park was beautiful and clean, the water warm, but no swimming, as the sign cautioned. I found two sharks teeth, but I’m convinced they must be dolphin teeth as I didn’t see a shark all day. Do people hunt for dolphin teeth? It doesn’t have the same awe/fear factor as saying sharks teeth, though.

We toured the fort and the battery, constructed in the late 1800’s, later in the day, after dear husband gave up on the fishing (the dolphins won in the end).

Fort De Soto is a 1,136-acre county park consisting of 5 islands (keys). There’s a campground, fishing pier, 3 miles of beaches, nature trails, museum, and a ferry to a nearby Egmont Key, home to a Spanish-American War era Fort Dade.