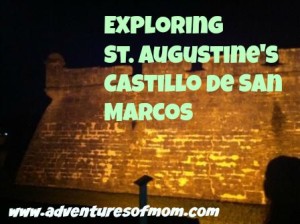 If there is one place that awakened my passion for history as a child, it was this: Castillo de San Marcos in St. Augustine

I have been exploring the historic fort,  Castillo de San Marcos in St. Augustine since I was a child. I remember the hot sweaty summers spent darting from room to room, the touch of the rough shells of the coquina walls, the grooves worn into the steps to the roof, testament to soldiers long dead, the impossibly high narrow slits of windows and that little secret room in the northeast corner- more on that later.  This fortress, built in 1672, had been my first encounter with something ancient, and I connected. And I have been hunting for history ever since. So I was delighted to be able to take my own children to my old stomping grounds.

The stone fortress dominates the landscape in St. Augustine.

The Castillo de San Marcos National Monument dominates the city scape of Old St. Augustine, perched near the mouth of the Matanzas River, it was built to guard the city against invaders. The pock marked outer walls reveal signs of cannon balls and musket rounds fired, battles fought and lives lost. The walls were built of shell packed coquina limestone, mined from the nearby Anastasia Island (you can visit the coquina quarries at the state park there), and were solid and capable of withstanding enemy fire, but that was not always the case. The original fort was built of wood and burned to the ground not once but twice by Sir Francis Drake and later Robert Searle. It wasn’t until 1672 that Spain had had enough and financed the stronger fortifications. That is the fortress of today, though the red and white plaster has long since flaked away revealing the natural beauty of the coquina stone.

Like all places in St. Augustine, the Castillo has it’s fair share of ghosts. We’ve learned about them through the years ourselves and also saw a Ghost Hunters special about the fort, like the ghost in the soldiers barracks. We haven’t seen it ourselves, but it’s cool to have a look at the rows of uncomfortable beds where the soldiers had to sleep. Makes kids appreciate their own bunk arrangements! And the locked room ghost. Then there’s the watchtower ghost on the roof. Again, we have never seen it, and even returned to the Castillo at night to catch a glimpse but to no avail. But my personal fave is the one in the little ammunitions room in the far northeast corner of the fort. I never knew it was haunted until that TV show. 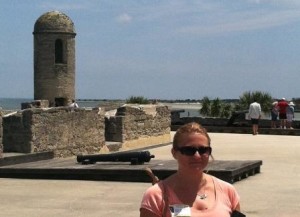 Seriously, I have always loved that room. All kids do. It’s creepy, lit by a single light bulb, in a hard to get to location, where you have to duck to get into it, and the walls are damp and mossy. It WAS cold the first time I went as a child. I remember it because it was so hot outside, and it felt air-conditioned. We could even see our breath in the air, but the past few other times I have been, it has been muggy. They say (“they” being the park rangers) the room was sealed for years and when it was opened, they found a skeleton–woooweee. I don’t know the time period on that story, but I heard it as a teenager on a tour. 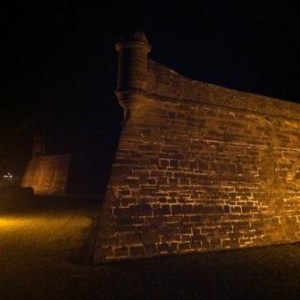 The rooms of the Castillo house museum galleries about the history of the fort, while others are just open on display of how the soldiers lived, though during sieges, the townsfolk moved into the fort for protection also. In the courtyard they have reenactment soldiers. They had a dentist with tools of Spanish Colonial time that resembled torture devices.  A real eye-opener!

The only access to the roof is up the worn staircase in the courtyard. (No strollers). But the views of Matanzas Bay and old St. Augustine are not to be missed. Upstairs are the big guns: the cannons. On weekends and special times during the year, they shoot off a cannon into the harbor. 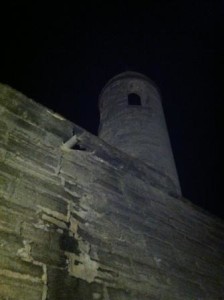 Looking for the ghostly watchman at the Castillo de San Marcos, St. Augustine

The moat around the fort is dry and full of grass and there are access points around it where you can walk. There is no fee for touring the outside of the fort only, so if you are short on time or arrive after closing, take a hike around the fort.

Castillo de San Marcos is an excellent place to take the family during your St. Augustine trip. Hands on history is the best way for a child to learn and remember, and if your child is a 4th grader during 2015 to 2016, your entrance fee is free! (For the  4th grader child and family of child). The grassy meadow around the fort is a great place for an impromptu picnic and to let the kids run or nap under a palm tree. And be sure to check it out lit up at night! 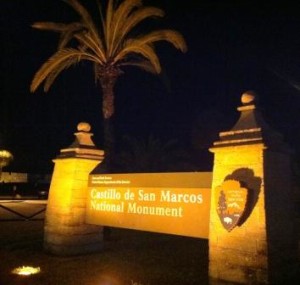 Castillo de San Marcos is a must see attraction at St. Augustine, FL

4. Parking  is per meter in the Castillo Parking lot (bring quarters). But if you are hanging out in St. Augustine for the day, try the parking behind the visitors center (across the street by cemetery).

Other Stories in the St. Augustine, Florida area that may interest you:

Previous Post: « Stranded on the Withlacoochee River: A Mis-Adventures Of Mom Tale
Next Post: Adventures in Anastasia State Park at St. Augustine, Florida »