Family-Friendly Fun in the Southeast
You are here: Home / Adventures / The Girl’s Guide to Ghost Hunting in St. Augustine 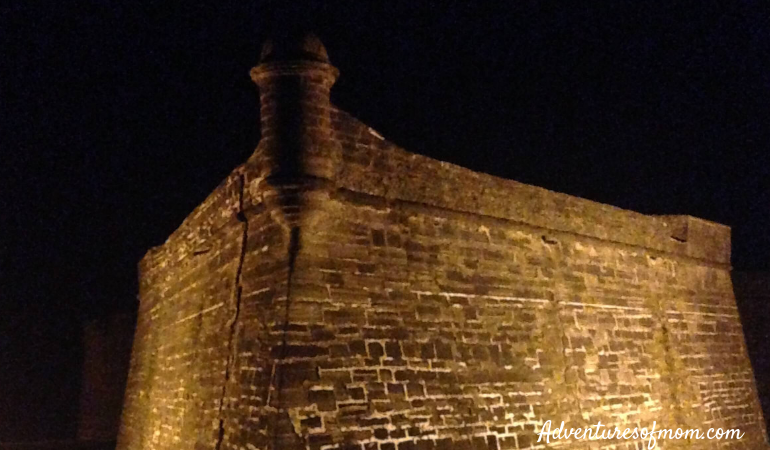 “Having a ghost is a good thing in St. Augustine,” the ghost tour guide said. She was dressed in a long black dress and cape. She lifted her lantern, casting an eerie glow over the crowd around her. There were about 14 of them from college aged to seniors, and they were one group of many. Tonight would be a busy night of ghost hunting in St. Augustine.

Most visitors come to St. Augustine to tour the historic buildings and sample the tasty fare, maybe even hit the beach for shell hunting or fishing, but when the sun sets, and darkness fells the ancient city, a new breed of tourists emerge…the ghost hunters. Since the famous TV show Ghost Hunters hit the air, searching for apparitions has become trendy, and there is no better place to ghost hunt than in America’s oldest city.

With 450 years of continuous occupation, wars, pillaging pirates and yellow fever epidemics, St. Augustine  is rife with spirits, but in case you were expecting to be gunked with ectoplasm by a mischievous poltergeist, like in Ghost Busters, ghost hunting in St. Augustine- or anywhere for that matter, is not like a Hollywood movie. Luckily, you don’t need to have Winchester-blood to get into the ghost hunting game.

Wait…Are Ghosts Real? If seeing is believing, I’ve seen and heard enough to say: heck yes! My daughter has another theory that may make you think twice: When a ghost sees you, maybe it thinks you’re the ghost. Hmmm…

I’ve been stumbling across spirits in St. Augustine for years. When my daughter showed an interest in this unusual hobby (can you call accidental ghost-hunting a hobby?), we set out to seek the paranormal together, taking official tours and doing much more DIY ghost hunting on our own.

With those years of experience between us came the Girl’s Guide to Ghost Hunting in St. Augustine to help others in their seeking quests.

How to Find A Ghost in St. Augustine, Florida

The best ghost detector you can use is your camera or smartphone camera. The camera is quicker than the eye and your camera will pick up specters too quick for the human eye. In our digital age, ghost hunting has been made easy. You can take dozens of photos at a time and discard the ones you don’t need with ease.

To check your photos for spirits, you must look at each one individually. Enlarge them using a photo-app. If you are using your phone, the Instagram app works really well to zoom into photos- add a photo and at the edit stage, you can enlarge it to hunt for spirit Just remember to discard it, not post, unless you need to share your discoveries  with your IG followers

Check each photo for anomalies like streaks of light, glowing orbs, and even ghostly apparitions. Ghosts aren’t restricted by the clock- you can check your daytime pictures as well. 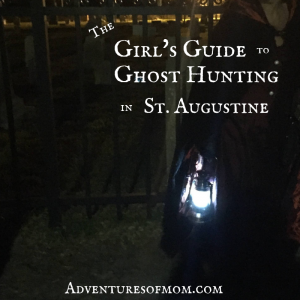 The Ghost of Judge John B. Stickney

I took a photo of the Huguenot Cemetery in broad daylight and at lunch, was checking over my photos and noticed what looked like a ball on the historic wall around the old cemetery. I enlarged my photo via Instagram editing and a tall man wearing a waist coat took shape! Was it the infamous ghost of Judge John B. Stickney? You be the judge! 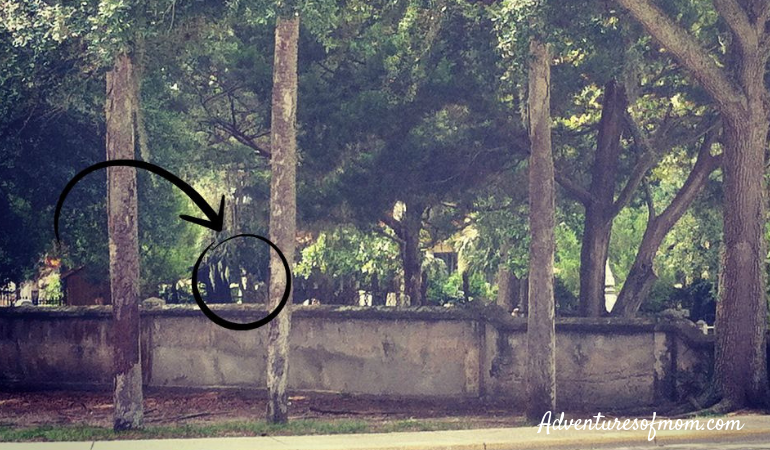 Taking a ghost tour is the best way to hear the stories & history of St. Augustine. And it will help set you off on the right foot for your own DIY ghost hunting adventures. There are many from which to choose.  Make sure to only use a reputable one.

The Ghost Tour with a Ghost

My sister and I took a walking ghost tour of St. Augustine together. Afterwards, she checked her photos and proudly declared she had captured a photo of a ghostly lady at Tolomato Cemetery. I looked at the photo and told her I remembered the girl from our tour because she had feathers in her hair- a fancy up-swept do, and she wore a very ornate dress. I thought she was just being theatrical, and as I was in an epic-coat stage myself, who was I to judge? I confess, this girl was pretty and I couldn’t help but stare- but after seeing my sister’s photo, I wonder if that was why our tour guide kept giving me strange looks. Were we ghost-hunting with an actual St. Augustine ghost?

Where to Find a Ghost in St. Augustine: Haunted Places

In case the tour scene is too stifling for you, or to supplement your ghost tour adventure, here are some of St. Augustine’s notably haunted places.

St. Augustine’s Lighthouse is cool place to visit in the daytime, and also home to a few haunts. There is said to be the ghost of a lighthouse keeper up inside the lighthouse- it’s been caught in pictures more than one, and there are the girls who drowned who are seen in the maritime museum and front lawn.

Said to be one of the most haunted places in the old city, ironically, this hospital existed during a time of peace in St. Augustine and the surgeries never took place at the hospital, but occurred across the road. However, the entire building was built on top of an Indian burial ground. Mmmm. The shops along Aviles Street are worth a look into as well 😉

Ghost Adventures on the Travel Channel did an episode dedicated to St. Augustine’s fort. Specters have been spotted in the soldier’s barracks and also in the tiny ammunition room – you have to duck to get into it. This dark damp room was sealed up for a long time, and when they opened it back up, they found a skeleton! A night watchman is said to walk around the top of the fort at night and a light is often seen floating near the watch tower.  You can tour the inside of the Castillo in the daytime, but only walk around the outside at night.

Located in the oldest pharmacy, the ghosts of pharmacists have been spotted going about their business, dressed in their white coats. A ghostly figure is said to haunt the chamber of horrors in the wax museum.

This is one haunted site that requires no fee. Located at the North end of St. George Street, the ghost of a  young girl named Elizabeth is said to haunt the old city gates. Most likely another victim of the yellow fever epidemic that swept through the city, Elizabeth has been seen perching on the wall and sometimes greets people coming into the city

Once a luxury hotel, the Alcazar was built by railroad magnate Henry Flagler in 1888 as a winter vacation spot for the wealthy. Now the Lightner Museum, this architectural wonder is  packed with an oddity of collections, like a child mummy, taxidermy animals, dolls & Tiffany glass.

Noises of a Great-Gatsby worth gala were reported by a night security guard- residuals of the Flagler era, perhaps. Apparitions of Flagler’s mistress & also second wife have been spotted. Public may only visit during their daytime hours only.

Built by Henry Flagler in the late 1800’s, the former Ponce de Leon Hotel was a state of the art luxury resort in it’s day, and one of the first using Edison’s electricity. Now a place of higher education, Flagler College is also home to a few haunts, reported in the dorm rooms & upper floors.  But you don’t  have to become a student to see the inside of this college. You can sign up for one of their daily Flagler College Legacy Tours  at 10am & 2pm. Reservations are required and these tours fill fast. Please note these are history tours, not ghost tours.

Flagler College is located directly across the street from the Lightner Museum on King Street.

These historic cemeteries in the Oldest City are only open to the public on certain days of the month. Trespassing is illegal. You can view them from the perimeter fences & walls.

St. Augustine’s historic Catholic cemetery is located near the Love Tree on Orange Street and dates back to the 18th century. Tolomato is home to a very different pair of haunts. A young boy named James has been spotted in the oak tree near his gravestone. The other ghost is an angry woman in white who once attacked a local police officer who had gone into the cemetery to investigate reported noises.

I spent a night  with my husband and newborn son in a B&B next to the Tolomato Cemetery. I don’t think its even there anymore. In the middle of the night, I was awoken by the sound of a child laughing- but it was eerie laughter. It sounded tinny and the hairs on my arms stood on end. I sat up but couldn’t see anyone. My son and husband were both sound asleep. The laughter came again and I cuddled up to my baby, scared. The next morning I asked the B&B owner if there were any other kids staying. He said no, but told me guests heard things all the time there. 7 years later I took a ghost tour and learned about James, the playful boy who haunted the Tolomato Cemetery, looking for a playmate.

St. Augustine’s Huguenot cemetery ironically contains no Huguenots. This Protestant cemetery dates back to 1821 and is home to many apparitions and the place of quite a few spirit sightings, from Judge John Stickney to a trio of mischievous soldiers who delight in pranking the local ghost tour guides.

The ghost of a woman named Katerina who died in a fire, has been spotted (more than once), in the upstairs back bathroom at Harry’s. Though it is wondered if it was actual spirit sightings or the local spirits they serve. Either way, dining in this historic building with views of Matanzas Bay is worth it.

Offering locally sourced & sustainable Flo-grown fare, this vegetarian & vegan friendly popular restaurant relocated to a historic building on Spanish Street which used to be the laundry of Henry Flagler’s hotels. Children are sometimes heard laughing in the back store rooms. 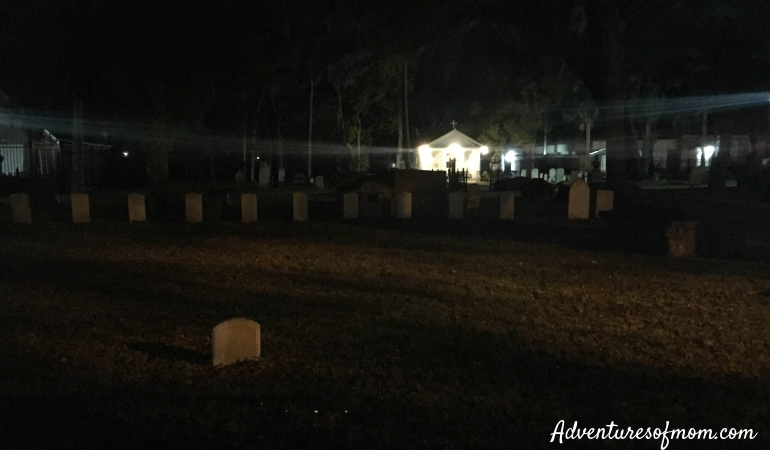 Do You Really Want to See a Ghost?

Before you head out on your DIY ghost hunting adventures, you need to ask yourself: Do you really want to see a ghost?

Here’s the big clincher. It’s like when you’re dying to see a bear in the wild and you finally face one. You panic and think -oh shit-that was a really bad idea- bears are huge and scary. So, do you really want to see a ghost? It’s thrilling, heart-pounding and terrifying all at the same time. But if you are on your own… you are on your own.

Ghost hunting is not for everyone. But you don’t need to be a believer to have a fun time on a tour either. And with a couple of best friends, your sister, partner or family,  you can embark on an eye-opening adventure in old St. Augustine that will give you plenty of conversation fodder for years to come.

Other Posts You May Enjoy