Family-Friendly Fun in the Southeast
You are here: Home / Adventures / Pirate Treasure or Junkyard Fodder: Searching for the Past on Amelia Island

I wish I could download a picture of our lovely weekend family adventure on Amelia Island, as I spent the first hour at Fort Clinch snapping away at the creepy brick passages and the flotilla in the distance, but then I discovered I had left our photo card at home (sigh), so I abandoned the camera and joined in the adventure… 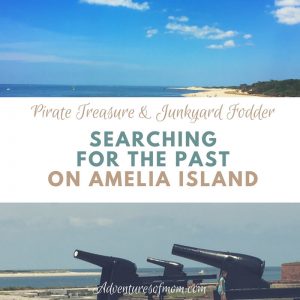 We headed for Amelia Island, located on the northern tip of Florida on Friday. You can actually see Cumberland Island in Georgia from the beach at Fort Clinch State Park. Voted on of America’s best parks, we could tell why with the white sandy beaches (No drivers on this beach, folks), littered with the biggest jellyfish I have seen outside of Tampa Bay’s Aquarium. The park ($6.00 per car of up to 8 people) has two camp grounds, one on the beach and the other on the river. We had tried to get a campsite last summer, but to no avail, You have to go through a central reservation system and it is booked 6 months in advance- but I could see it was well worth it. The entire weekend we spent at the State Park.

We hadn’t brought tents this time and stayed at the Marriott Residence 3 miles away. Beautiful two bedroom suite with a fold out bed in the living room area- this was the first time that everyone actually got their own bed! There was a kitchen as well, which we used on Saturday, after picking up some sushi and salads at Publix down the road, and a hot breakfast is included daily, with waffles, sausage, and eggs, grits…yum Everyone was satisfied- which was good, as Fort Clinch State Park involves a lot of walking.

The park has a bike trail (we will bring bikes next time) and a walking trail, along with a fishing pier, camping store and museum- and there is the Fort itself ($2 per person and worth it). We explored long passages, climbed tight stair cases to the roof turrets, barracks, the jail, kitchen, and storehouses. Soldiers outfitted wandered around, explaining the various rooms and jobs they had to perform back in the 1800’s, and also tried to recruit the girls to catch up on the soldier’s laundry.

After the fort, we wandered around to the long white sandy beach to look for shells and pirate gold (I’m always looking for pirate gold- I blame it on those tales of Gasperilla I read when I was young). My husband found a shark’s tooth, the kids found shells, and dear little one was desperate for a dip, despite the incredible amount of jellyfish bobbing about. At 58°F, the dip was out of the question. We wandered the beach by the fishing pier after lunch in the room and the kids found what could have been an old iron boat in the sand- or maybe a fishing pier- lots of rusty iron sticking up- my pirate ship? We lacked the shovels, and it was nearing sunset- when they close the park to those not camping, so we high tailed it out of there.

We rounded our day at a seaside restaurant called Sliders, where a singer crooned Stevie Nicks songs, the kids nibbled on shrimp and my little one managed to knock over a fake ficus onto an unsuspecting, but gracious fellow customer. Highly embarrassed, we returned to our rooms and had an early night, vowing to return with bikes and tents (though that endless supply of hot water was lovely- usually someone gets a cold shower in our house on the weekends!) So tough call on that one, but definitely worth a return- fake ficus mishaps excluded.

Next time I’ll remember to put the camera card into the camera!