Family-Friendly Fun in the Southeast
You are here: Home / Adventures / Ghost Hunting in St. Augustine, Florida 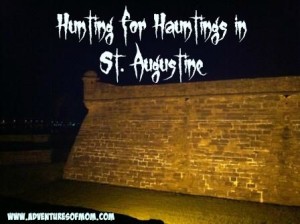 Hah hah- Part 2, you say, where the heck was part one? Check out my Ghost Walk Tour- where I learned the name of the ghost I had encountered on a previous trip to St. Augustine. Part 1 here.

I found a ghost! I found a ghost! At least, I think I did. You’ll have to be the judge of that one in the pictures below.  I must admit, since I discovered that I had personally encountered a real St. Augustine ghost years ago, I’ve been a bit obsessed with ghosts in the nation’s oldest city. St. Augustine is one of the most haunted cities in the United States- mainly because it lost a vast amount of people to a yellow fever epidemic. Then they built the city on top of a big graveyard- double whammy. I am not sure what a ghost actually is- a dead spirit,  a rip in the fabric of time or some weird imprisonment sentence, but it seems to be a person- or embodiment of a real person stuck in a certain spot. And I found another one…I think. 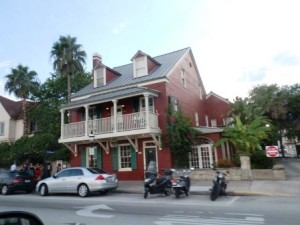 Located in a rambling old house, Harry’s Bar and Grill LOOKS like a place to find a ghost- and good food!

On our previous trip to St. Augustine, we had lunch at Harry’s Seafood Bar and Grill, the famous New Orleans styled restaurant with windows (upstairs) with a view to Matanzas Bay. Located in a rambling antiquated house, Harry’s looked to be a prime ghost hangout, so the first thing I asked the waiter was: “Are there any ghosts here?” (There are ghosts in most dwellings here, like ancient ruins under any building and park in Athens, Greece.) So I was not surprised at his answer: “Yes, a long time ago, this was a family house and there was a woman living here…and a fire…some people have said they’ve seen her in the women’s restroom.”

Does Katerina really haunt this restroom or is it the figment of too many rum runners?

The waiter then assured me that he had never personally seen the ghost, but her name was Katerina and she died in a fire. I thought it convenient that she haunted the women’s toilets and not the adjacent men’s (ah, a skeptic am I!) Was she a real ghost or a figment of one too many rum runners? My daughter and I checked out the women’s restroom. Twice. No ghost. We consoled ourselves over their yummy Oreo beignets.

Was Katerina a real ghost or a figment of one too many rum runners? My daughter and I checked out the women’s restroom. Twice. No ghost. We consoled ourselves over their yummy Oreo beignets.

Then we tried the fort that evening. A stroll around the ancient Castillo de San Marcos was sure to bring out a ghost or two. Not even the night watchman. Nada. 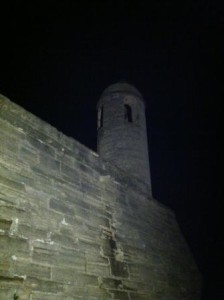 We looked for the night watchman at the Castillo, but the only lights burning that night were modern day flashlights!

We had explored St. George Street earlier that day and I had snapped away at the historic buildings – I love old buildings.  I even ran across the St. George Street entrance to snap a picture of the city gates (there is supposedly  a ghost who hangs out there). Nothing again. On whim, I turned and took a photo of the old cemetery. Later,  while I was loading photos onto Instagram (yes, I Instagram!) (www.Instagram.com/theadventuresofmom) that I saw my ghost- a man standing in the graveyard- he has his hand on the cemetery wall and he’s wearing a white shirt, waistcoat and jacket. Take a look below and you be the judge: ghost, lighting or figment of my imagination?

I found a ghost! I took this pic while standing by the city gates…and then enlarged it.. 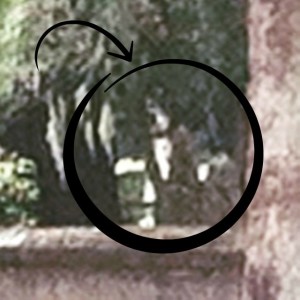 Enlarged photo. Is there a ghost in that St. Augustine cemetery?

Things to know Before You Go:

Walking with Spirits: A Ghost Tour of St. Augustine (and Part 1 of the ghost story)

Up Close and Personal: A Tour of St. George Street