Family-Friendly Fun in the Southeast
You are here: Home / Adventures / 12 Things You Should Know About Fort Clinch State Park

Wondering how on earth soldiers eras past managed, we eased ourselves up through the narrow winding staircase of the bastion, and were rewarded by sweeping vista views of the Atlantic and Cumberland Sound. Ramparts, barracks, and long dark tunnels, this was a Florida fort we could freely climb through to explore the past. 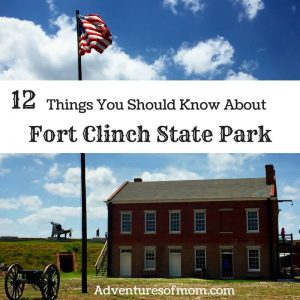 12 Things You Should Know About Fort Clinch State Park

Named after American Revolution & Seminole War veteran General Duncan Lamont Clinch, and located on the northern portion of Amelia Island, this 1,427-acre Florida State Park offers a step back in time behind the red brick masonry walls of historic Fort Clinch with hiking and biking, swimming and fishing and much more. Here are 12 things you should know about the historic Fort Clinch State Park.

Fort Clinch was under restoration during our visit. Being a historic fortification (listed on the National Register of Historic Places) and battered by hurricanes, it is undoubtably always in a state of restoration. When visiting, take heed to any warnings or baracades. They were put there for good reasons. There are no handrails or guardrails, so watch your younger kids while exploring this significant piece of Florida history.

More Posts That May Interest You:

Hunting for Haunts in St. Augustine

10 Things You Should Do in Georgia