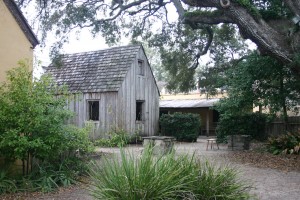 In St. Augustine,  I realized I had been a time traveler

A Writing Workshop in St. Augustine

I had the opportunity to revisit St. Augustine, on Florida’s historic coast, last weekend. My sister, Sandy and I were attending writer Connie Mae Fowler’s workshop in Summer Haven- only a short drive from America’s oldest city, so we thought- too close not to visit again. St. Augustine has always been a personal favorite of mine, carrying from wild pirate imaginings of my youth through heartaches and tragedies later in life. With walls and streets so ancient, a few more tears go unnoticed in their centuries of tragedy.

That Moment You Realize You Are A Time Traveler

This trip was different- quite peculiar- and not just because it was the first sans children in 7 1/2 years (yes, I called a lot and missed them terribly), but this visit we went to places I had never been before- and this time I found out that I was a time traveler- eat your heart out, Dr. Who! I do not speak of exploring a museum to go back through time- no, this visit that made me realize I had already traveled through centuries…yes indeed. 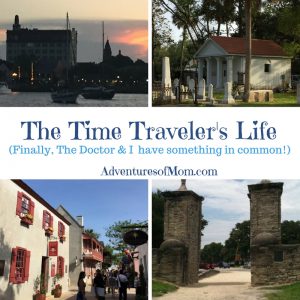 My sister and I went to the Colonial Spanish Quarter a blustery Sunday morning. The air with wind chill factor was in the low 30sF. Brr- and we stepped into the living village- modeled on a Spanish settlement in the 1700’s in St. Augustine. Sounds of a blacksmith hammering iron rang through the air. A pungent fire burned beside him, keeping the iron malleable. Clucking chickens ran amock in a winter’s bare garden, surrounded by cypress and orange trees. I felt a weird sense of belonging.

We followed the path to the scribe’s house at the far end of the settlement. I peered through the open shutters: wooden beds, pottery as kitchenware- tools, all dusty and antiquated. It looked oddly familiar. Then it hit me, I was seeing my Corfu, the little Greek island nestled near Albania in the Ionian Sea, where I spent the past decade of my life. Picking olives. Milking goats. Hunting for firewood.

I must say, aside from when I saw that advert in the movies- a full-screen ad of Captain Corelli’s Mandolin, never before have I been hit with such Kerkyra nostalgia. Everything around me, even the cold air, screamed of long winter nights spent in the tiny mountain village of Tritsi, and huddled by a fire, trying to keep warm. Hunkering down during the long rainy months. Cooking dinner over a wood fire. This lifestyle may have been the 1700’s in  St. Augustine, but I had been living that way in the late 1990’s up a mountain in Corfu, Greece!

It was then I realized I was a time traveler. Everything here was familiar- not museum familiar, but daily life familiar- collecting wood from down the mountain- any wood to keep a fire- the only source of heat, fetching drinking water from the local spring down the road…the smells of wood fires, of loose chickens, of someone cooking a pot of stew over the fire. Dressing in layers and layers of old clothes just to get some warmth-

And so it was here, in the Colonel Spanish Quarter of St. Augustine, a 1700’s settlement, that I discovered I had lived a time traveler’s life. I guess The Doctor and I have more in common than I thought! Now, where did I park that dang TARDIS?

The Colonial Quarter Museum is located at 33 St. George St in Old St. Augustine. Open daily 10 am to 5 pm 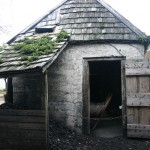 The blacksmith’s fire teased my olfactory senses, waking past memories

Walking with Spirits in St. Augustine

The Monster Encounter in Corfu