Just north of Jacksonville and a stone’s throw across the bridge from Amelia Island, exists one of Florida’s unique coastal areas on Big Talbot Island. Originally inhabited by Timucuan Indians, Big Talbot Island became a state park nature preserve in 1984 and remains as one of the last undeveloped barrier islands in Florida. You can scramble up rocks, explore tidal pools, and dodge the giant driftwood on this unusual natural playground.

This is definitely the beach for adventurers, and explorers and remains a family favorite of ours. The first time we visited here, we had to park on the roadside and take an unmarked path through the woods, but the Florida State Park folks have upped their game, making access to these particular island beaches more user friendly. 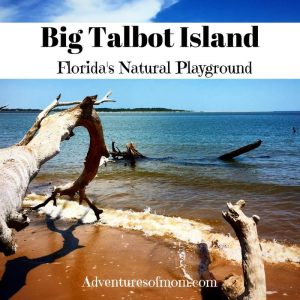 You can park at one of their three official spots and take a trail to reach the various sections of the beach, or just stroll along the coastline. The area near George Grady Pier (George Grady Pier State Park) offers white sandy beaches, like that of Amelia Island State Park on the other side of the bridge.

Further south, the beach is littered with enormous, twisted, sun-bleached trees. Once a living forest, these trees are testament to the harsh storms and hurricanes that batter the Atlantic coast. This area, known as Boneyard Beach, can also be accessed from The Bluffs Picnic Area, off of A1A. 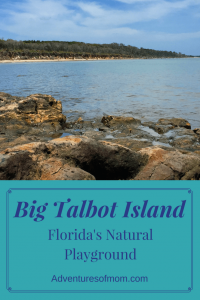 After the driftwood debris dissipates, the coast takes a sharp turn and the beach vanishes. All you will see is rocks- if you continue on you have to climb the rock and through a little trail in the palmettos. This area is difficult to access and impossible during high tide, but once around the bend, you will come upon the beginnings of Black Rock Beach. Tidal pools filled with tiny crabs fill the pock-marked black rocks along the seaside. My husband fished from the rocks here and caught whiting. That seemed to be the catch-of-the-day among the fishermen on the beach too, but you can also find redfish, speckled trout & flounder.  We also spotted two enormous sea turtles in the water there as well- beautiful creatures!

We found a lean-to shelter erected nearby, that looked pretty stable and was used to escape the harsh afternoon sun by fellow beach explorers. Past the shelter is a stand of dead trees and more of the famous craggy rocks of Black Rock Beach. You can access Black Rock Beach from Black Rock Trailhead on A1A. 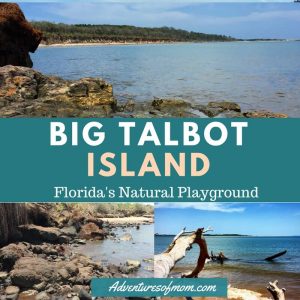 Tidal salt marshes line the opposite side of the island, and offer a good place to explore via kayak. Kayak Amelia is the local Talbot Island outfitters. You can rent kayaks & paddle boards with guided tours or DIY exploring.

Portions of the beach on Big Talbot Island disappear completely during high tides. There are warnings posted. Don’t get stuck- particularly in the Black Rock area, as the brush behind the thick brush behind the beach and up the slopes is impassible.  Know the tide times for the day & don’t get stranded.

There are no concessions on Big Talbot Island, but you can find a plethora of restaurants & eateries (and yes, even a Walmart to pick up those last minute flip flops & forgotten suntan lotion) on nearby Amelia Island. Amelia Island & Fernandina Beach also have lodgings in all budget ranges. 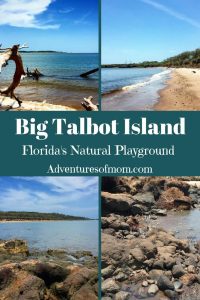 Camping is available on both Amelia Island and south on A1A on Little Talbot Island.

Other Posts That May Interest You:

Previous Post: « 12 Things You Should Know About Fort Clinch State Park
Next Post: How to Make a Citronella Candle (with Essential Oil) »