Family-Friendly Fun in the Southeast
You are here: Home / Adventures / Exploring Rum Island 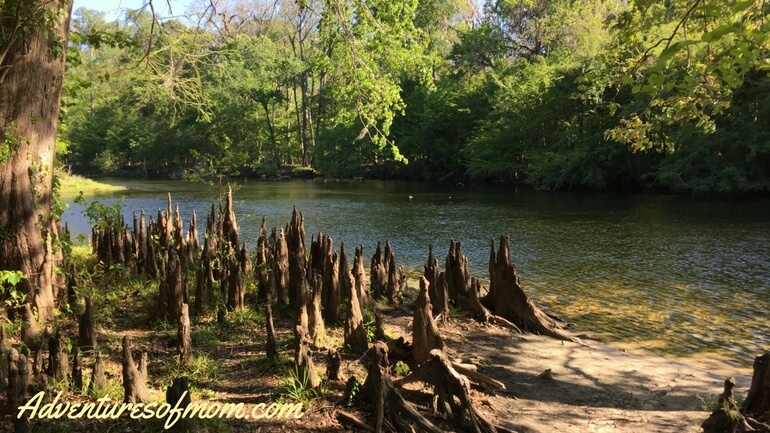 No Rum at Rum Island in Fort White

Rum Island. The very name invites visions of swaggering pirates, steel drums, and a tropical party atmosphere. Yeah, we found none of those at Rum Island County Park, a quiet slice of natural Florida tucked into a niche on the Santa Fe River. We had reached the end of a long spring hunting expedition in High Springs and Rum Island seemed too close to ignore. 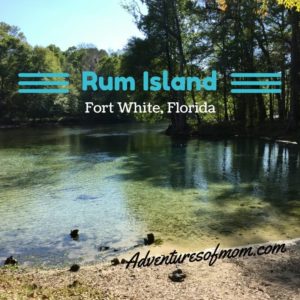 “Will there be beer there?” My daughter questioned as I drove down a twisty lane in the middle of nowhere, passing a road named “Cobra.”

“I mean rum,” she corrected herself. We all laughed.

Rattlesnake Road slid past. I wasn’t too worried about rum runners at the moment but wondered more about the road names. Were there lots of slithering reptiles in this region, or was the road-namer just a snake fanatic? We had just left the “happening” party spot on the river at Ginnie Springs, where families and spring breakers were camping, grilling and even swimming, despite the chilly weather, around some gorgeous springs. Maybe Rum Island would be the same.

We came to the gate and a sign for Rum Island. Siri told me to park the car and walk. Yeah, sometimes she doesn’t quite get it right. I drove down the narrowing road and into a quiet little park on the river. There were two rental canoes by the boat ramp with a family hanging out, waiting to be picked up, and two guys fishing. No pirates, party or rum in sight. 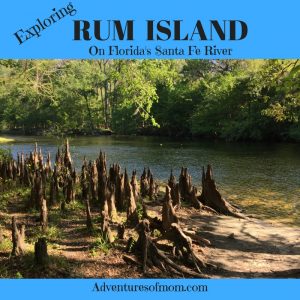 Rum Island County Park stretches along a little creek and also along the Santa Fe River.  According to Joe Follman and Richard Buchanan, writers of Springs Fever: A Field & Recreation Guide to 500 Florida Springs, the name came from “the local moonshine and bootlegging operations on the island in the early 1900’s.”

“Looks like three springs,” my son said. I was quietly impressed. Perhaps our wanderings would produce a younger generation of spring hunters yet!

“There’s a path!” My daughter made a dash around the swimming holes and toward the cypress swamp. She had been following deer trails earlier that morning on the other side of the river. We followed the path over logs and around stumps to the river, though I suspected this one was made by two-footed critters.

Hanging out on a log, the kids tossed sticks into the water, a laid-back end to a long spring-hunting filled day, without a drop of rum in sight. Ironically, alcohol is prohibited in Rum Island Park!

Rum Island is only 7 miles from downtown High Springs, a free swimming hole and a great place to put in kayaks to explore the Santa Fe River.

More Posts that May Interest You: