‘Keep putting one foot in front of the other and you can walk around the world.’

I don’t know who said it, maybe me, but that has been my life’s philosophy since I can remember (I literally had a childhood desire to circumnavigate the earth on foot). Ok, so I never lived that particular dream, but I held on to the philosophy inspired by it, and following my mother’s death, I felt the need to get out, back to explorations of our Florida habitats. The kids had spent a week in and out of hospice waiting rooms, so they too were happy for our unexpected adventure. So despite the gloomy skies, we hit the roads and headed for Ellie Schiller Homosassa Springs Wildlife State Park. 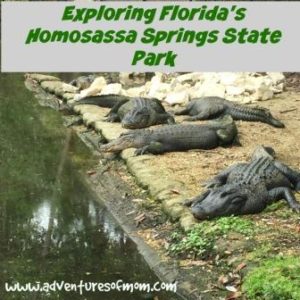 Homosassa Springs was an old Florida attraction rescued by the State Park Service. A great place for a Florida family adventure!

Not your average State Park, Homosassa Springs was once an old Florida Attraction, dating back to the early 1900’s, 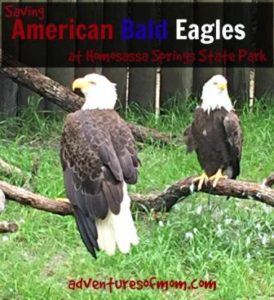 much like Rainbow Springs, Silver Springs and Weeki Wachee. I used to visit this place in my childhood- my parents would drive all the way from New Jersey and we would stay at the hotel over the bridge by the park entrance and take the pontoon boat ride up Pepper Creek to the wildlife zoo in the back. Rescued by the State Park Service from imminent doom, they recognized the value of Homosassa Springs as a Park and animal rescue center. The hotel still exists, though it has changed hands many times and is not owned by the park service, and you can still ride the pontoon boats on Pepper Creek, though the non-native monkeys on the islands are notably absent, as the State Park service has a Florida Native only policy. The new Homosassa Springs might resemble a zoo of sorts, but the animals in it are rescue animals in stages of rehabilitation- except for Lucifer, the hippo.

From the boardwalk paths through the former zoo area of the park, we were able to view the majestic American Bald Eagles, Florida Panther, numerous nesting pelicans, flamingoes, owls and foxes. A reptile house gave us an up close and personal look at the native Florida snakes and baby alligators. Though the venomous Water Moccasin was a bit too up close for my tastes, it was good for both the kids and I to see which snakes we really needed to avoid on our wildness adventures. We always avoid alligators- even the small ones (they tend to come with very big and protective mothers!)

You can view Florida baby alligators and snakes up close in the reptile house at Homosassa Springs State Park. Think I’ll stick with the blue and orange kind from UF!

Lucifer, Lucy, or Lu: The Hippo of Homosassa Springs 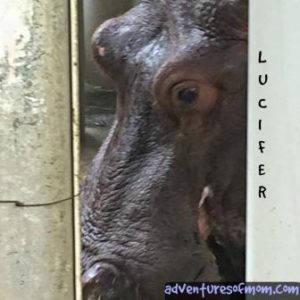 My old friend, Lucifer, the hippo of Homosassa Springs looked me square in the eye when I said his real name.

Lucifer the hippo has been a feature of the Homosassa Springs park since long before I was born. The former animal actor became a fixture at the original old Florida attraction after retiring from his screen career. When the park was bought by the state, they tried to relocate him, due to their native-only policy, causing a public uproar. The state governor at the time, Lawton Chiles, intervened, and officially gave Lucifer a honorary Florida Citizen status, thus enabling him to go through the State Park red tape, and remain in his home.  At 56, Lucifer is one of the oldest hippos in captivity in America.

Through the years I have noted the signs around Lucifer renaming him once “Lucy” and now “Lu,” I’m not sure if they are trying to be politically correct. Lucy, seriously? He’s a guy! But to me he will always be Lucifer. On our visit I was telling my kids about the story behind Lucifer and I called out his name- he actually looked me square in the eye. So I suspect he prefers being called Lucifer as well.

Be warned when standing near his back side, as his poop tends to spray a four foot radius (sometimes more) around him! The nearby snack bar over the bridge used to be called the “Splash Zone” for that reason and not because the hippo was doing high dives! Now that’s a fun fact to share with kids, isn’t it? 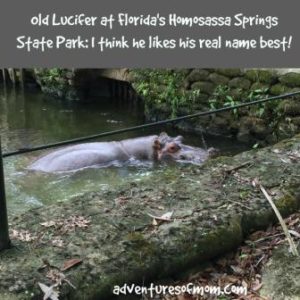 The park may try to change this old hippo’s name, but this 56 year old retired animal actor knows exactly who he is: Lucifer! 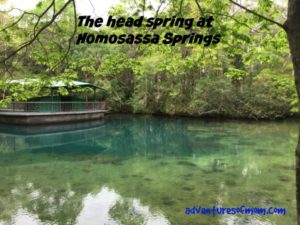 This Florida 1st magnitude spring pumps out over 64 million gallons of fresh water daily- and you can go inside of it!

Homosassa Springs State Park is the only place in the world that you can actually walk into a spring- without getting wet! I know that the state park folks and the environmentalists are pulling out their hair on this one, but the original attraction owners built a underwater observatory in the actual head spring of the Homosassa River. With rules, regulations and red tape, they would never ever be able to do that today, so this is the one place where you can take your children down into the bowls of natural underwater world to come face to face with schools of mangrove snappers, see giant snook (they are massive and numerous) and even spot a West Indian Manatee. This first magnitude Florida 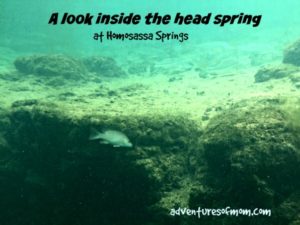 I led my children into the bowels of the 1st magnitude Florida natural spring of Homosassa Springs.

spring pumps out approximately 64 million gallons of water daily that will travel the eight mile run of the Homosassa River to the Gulf of Mexico. And you see it first hand without a boat, snorkel or mask. Pretty amazing, right?

Keeping with my Spring Hunting theme this year, I did try and find one of the smaller springs located right off the Homosassa River along a nature walk in the park (over the bridge crossing the river). Once a sparkling blue gem, this visit found the spring in question covered with debris and stained dark. Am not sure if they can’t clean it due to State Park rules or it was just a seasonal look.

Homosassa Springs State Park is an easy 4-hour family fun adventure for all ages. The fenced in boardwalks over the animals make it great for young children and stroller-pushing families. An old Florida family favorite, like my own parents, I have been taking my kids here for years.

Things to know before you go

And on an end note…a bear! I realize after last year’s bear hunting fiasco that me and bears are just not meant to be. My daughter spotted this one at Homosassa Springs and ran off with my camera to take his picture (he is another former animal actor too, like Lucifer, apparently). But the moment I showed up, he took off to the far corner of his enclosure- I am guessing that I must be bear repellant! 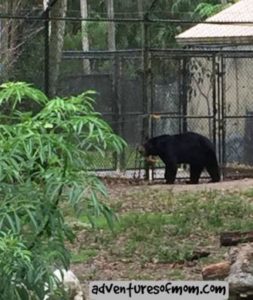 I must be bear repellant! My daughter took a closer pic when I wasn’t there, but the fence was in the way, so this was after he saw me and took off.

What is your favorite family destination?

Other Florida Family Favorites that may interest you:

Previous Post: « Death of a Mom: In Remembrance of My Mom
Next Post: How to Live an Extraordinary Life Today: Tip #32 »