Family-Friendly Fun in the Southeast
You are here: Home / Adventures / Exploring Mars at the Kennedy Space Center

There used to be calls for astronauts, to explore the moon and space, but ever since NASA’s Mars Rover started sending us photos of the 4th planet from the sun,  man has stretched their imaginations a little further, directing it to the little red planet in our solar system called Mars.  I’ve seen “Astronauts Wanted” adverts online and heard about them in the news. Scientists have even set the plans in motions, holding simulated Mars training – according to the TIME, they’ve been there for a year now. 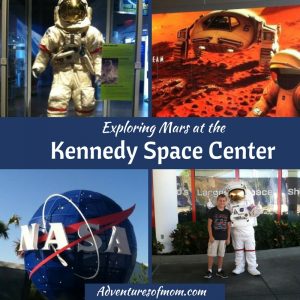 When my sister invited us to join her at Kennedy Space Center as a birthday present for my son, I confess, I was curious about their Mars exhibit. I’ve been reading about people signing up to travel to Mars.  Would there be recruiters standing by to take your names? Would my son beg me to allow him on a Mars mission? No to both of those questions, but we did find the Journey to Mars: Explorers Wanted attraction eye-opening. There is a lot more going on at NASA in regards to Mars than what we believed.

An astronaut was on hand to greet us before we escaped from the 96F Florida heat into the cool darkness of the Journey to Mars exhibition.

I noted the We Want You posters immediately, reminiscent of the old Uncle Sam recruitment ads. Inside the red glowing dim interior were images of the red planet and studies that NASA has been conducting regarding the viability of humans traveling to Mars. From radiation to severe atrophy of muscles, they have been carefully digesting this matter- and speaking of digesting, one of the ‘we want you’ posters showed a farmer-astronaut, giving a big nod of significance to farmers and real food everywhere (thank you!) 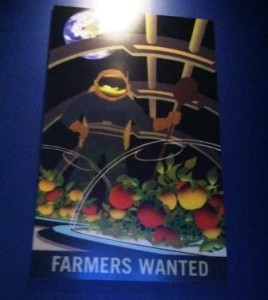 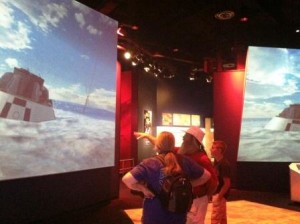 Exploring inside Journey to Mars attraction with the family.

The Journey to Mars: Explorers Wanted exhibition is one of the many family-friendly attractions you can explore at The Kennedy Space Center in Cape Canaveral located just East of Orlando, Florida.

Check out the pics from the NASA Mars Rover. 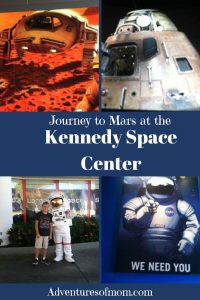 This exhibit is included in the Kennedy Space Center admission fee

You can check what’s going on with the Nasa and Mars on the NASA website.

Just need the facts? Check out all the scientific stuff about the Red Planet.

More Stories That May Interest You:

Previous Post: « A Walk on the Wild Side: Hiking Black Bear Wilderness Area
Next Post: Making the Most of Your Summer Walt Disney World Family Trip »