Family-Friendly Fun in the Southeast
You are here: Home / Adventures / An Epic Total Eclipse of the Sun is Coming! (Are You Ready?)

The 3rd-period bell shrilled through our classroom.

“Whatever you do, don’t look at the sun,” our teacher yelled at us as we rushed out the door.

Outside, teachers and students stood transfixed, looking up with their hands above their eyes, as if to shield themselves from the radiance of the eclipse.

I automatically looked up, and couldn’t see anything- there was cloud cover overhead. “Do you see anything?” I asked my friend…

The Epic Total Eclipse of the Sun

America is gearing up to witness the next total eclipse of the sun. It’s happening this Monday (August 21st). People have been snatching up their Solar Eclipse Glasses and making plans to hang out in the great outdoors during this epic event. I already received a phone call from the school saying they were suspending all outdoor activities and keeping kids indoors during the solar eclipse- but after school, they were on their own. This has never happened before, even during solar flares- where the sun spits intense radiation and energy at the earth like a child spitting out watermelon seeds. So what happened? 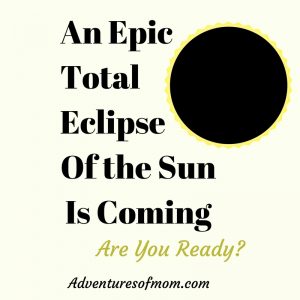 NASA has jumped on board with both feet with the 2017 Solar Eclipse. They have been trying hard to drum up attention, and draw public interest towards their scientific research and science as a whole- so in comes the eclipse.

NASA has embraced this eclipse wholeheartedly, even creating an entire website dedicated to this solar event. Anyone can look up all the facts, safety videos, weather for eclipse day, straight from their site. They have the world watching and they are not going to miss this opportunity to get kids and adults alike interested in science. They are rebranding themselves to be fun, energetic and eager to share, encouraging everyone to become “citizen explorers” and help take data readings and photos to record this epic event. They even have an entire web page about music referencing solar eclipses! Yes, NASA has gone hip and is totally rocking this! But just how epic is this eclipse?

A Once in a Lifetime Event?

I was in middle school during the last solar eclipse (but it may not have been a full one) and I’m not that old! If you miss Monday’s event, the next one will cross through the southeast states April 8th, 2024. We are actually not in the total eclipse path, which runs from Oregon to South Carolina, so us folks in Florida will be getting a partial eclipse. But as for the people in the full eclipse path (a 70-mile radius path), the next one won’t happen there for another 375 years!  Miss it and you may have to travel for your next full solar eclipse.

Safety and the Solar Eclipse

Looking directly at the sun is nearly impossible. Your eyes burn. Tears start to form and yes, you feel that stabbing pain- so you look away. This eclipse is not about the shadow crossing the sun that will hurt you, but about looking at the sun. It’s a bright light (the brightest in our universe)! And looking at it will burn the retinas of your eyes- ouch! So that is the reason behind all of the safety warnings. And the folks at NASA have been passing out millions (yes millions) of solar eclipse glasses to protect your peepers.

Need a pair of solar eclipse glasses? Check out their list of retailers selling NASA-approved ISO certified eclipse glasses. (We found some at Lowes!) Beware of buying counterfeit glasses, as you can damage your eyes. Or stop by your local library or science museum and sign up for their Eclipse event and you may be able to score a pair. Don’t bother using your sunglasses-  even those super UV protected ones that may have protected your eyes during fishing out in the gulf- remember, you were staring at the water, not the sun.  They won’t work for an eclipse. Check out NASA’s eclipse safety ideas to help you view this solar event without destroying your eyesight.

Being Florida, the eclipse happens here between 2 pm and 4 pm. The total eclipse will only last 3 minutes- tops (and it won’t be a blackout here in the partial eclipse zone. Chances are we’ll have a storm (they seem to be rolling in daily), so we may have to resort to the weather balloons above and their live-stream of the eclipse.

…My friend looked up and looked down again. “Nope,” she said. We both walked to our next class before the second bell rang.

Did we suffer retinal damage? Probably not. It was too cloudy and we couldn’t really see the sun, but just thinking about looking up at the sun right now has my eyes aching already! Be safe and don’t damage those peepers!

Are you joining an Eclipse Party or heading somewhere to watch this eclipse? Let us know in the comment box below!

More Posts that May Interest You: