Family-Friendly Fun in the Southeast
You are here: Home / Adventures / SpaceX Falcon 9 Launch

During our recent family visit to Florida’s Space Coast, we were lucky to witness Monday morning’s SpaceX Falcon Rocket launch from the Kennedy Space Center. The weather was beautiful, but clouds began amassing around 10 pm Sunday night. Launch time was at 12:45, but as you can see from the video, the spattering of clouds only made for a more interesting launch. 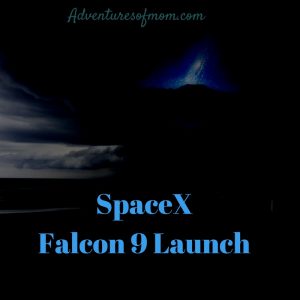 It wasn’t difficult to convince the kids to stay up that late (chocolate helped) and the wind kept the bugs at bay at our viewing spot across the inter-coastal waterway. The rocket lifted off on time and carried the Dragon spacecraft into orbit to bring supplies to the astronauts on the space station, then the Falcon 9 descended back to earth to land on the ground at the Kennedy Space Center. I had seen this rocket land on a pad in the middle of the water. Very cool- check out the SpaceX video of that landing here. But this was their first landing on the ground. They land it by remote control. And all I can picture is some guy in a room with a joystick and a bag of chips. Yeah-probably not that, right?  SpaceX will be re-using this rocket to take up the next spacecraft. This saves millions (probably billions) of dollars and work and lots of time.

Check out the launch video here:

What I didn’t record in the above video was the sonic boom after the Falcon 9 landed. It was so delayed and shook the ground that we thought the Falcon rocket exploded!  It was John who informed us that it was a sonic boom- delayed because light travels faster than sound! However, I did read in the news that the sonic boom had lots of people calling 911 in the area!

We had visited the Kennedy Space Center last year with my sister and her husband, but this was our first launch. My sister’s husband, John, who worked on the space shuttle program told us that when the shuttles launched, it was so bright that you could read a paper from the light, so the Falcon 9 was a mere sparkler in comparison to a firework. But what a sparkler it was! Awesome job done by those involved in the rocket and the launch!

Check out more about the SpaceX program on their official website here.

To read about NASA and their programs, check their website here.

Thinking about watching the next launch? Check out the launch website.  There are a couple of Altlas Rocket launches scheduled for later this year. You can buy tickets and go to Kennedy Space Center for a launch (limited tickets available, so plan ahead), or do as the rest of us mortals and watch from across the inter-coastal waterway in Titusville. Lots of parks and boardwalks along the waterway for viewing. Set your phone to the launch time (my sister set her alarm for a minute before). The actual countdown is broadcast with a delay, so the rocket was already in the air by the time the announcer got to “lift-off.” A girl near us was listening to the broadcast while we were all watching.

More Stories that may interest you: