Family-Friendly Fun in the Southeast
You are here: Home / Adventures / Coming of Age at Kennedy Space Center

“Shoot for the moon, if you miss, you’ll still be among the stars…” -Les Brown

My son recently celebrated becoming a teenager at Kennedy Space Center at Cape Canaveral, Florida.  A birthday present from his Aunt & Uncle who live near the scenic Space Coast, we joined in his birthday treat to explore the NASA visitor complex, where their favorite quote is: “Failure is NOT an option.”

The Florida temperatures soared into the 90’s, and despite our close proximity to the coast, the concrete and metal of the Space Center only served to accentuate the heat, but luckily, the Rocket Garden and Astronaut Memorial aside, everything was neatly tucked away in climate-controlled buildings, including an IMAX 3-D movie experience- (we saw the HUBBLE 3-D, experiencing the  nebulas and far-flung places of the universe  from images courtesy the Hubble Telescope- after its’ harrowing repair job in space). 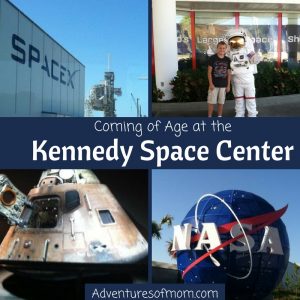 My sister led the way into the Early Space Exploration exhibit to begin our day. I had not set foot at  Kennedy Space Center since I was a young teenager myself, but like the space program and my son, the Visitor Center has come a long way, integrating the informative exhibits with simulators and interactive displays.

In the red glow of the Journey to Mars attraction,  you can attempt to land on the moon, or send a picture of yourself on Mars to a friend (no extra fees), kids can climb into a  moon buggy (Lunar Roving Vehicle) in the Early Space Exploration Museum, or slide into a capsule in the Rocket Garden,- imagine sitting there for a day or two! Though closed during our visit, there was even a outdoor (covered from the sun) playground for younger kids, making Kennedy Space Center a family friendly attraction for all ages. 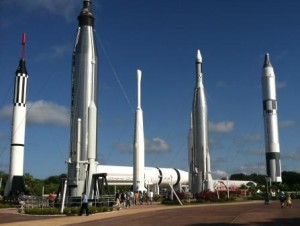 My son’s favorite highlight of the day came after the bus tour that took us by the launch pads and vehicle assembly building, dropped us at the Apollo/Saturn 5 Center. After a short movie, came a simulated rocket launch: the building shook- and then we walked out into the warehouse that housed the largest rocket ever made: Saturn V. The Apollo/Saturn V Center is a tribute to the Lunar Astronauts and trips made to the moon, with spacesuits worn, Apollo Capsule and even a piece of moon rock to touch. 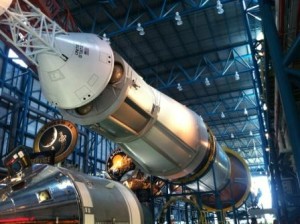 Back at the main complex, we hit the Space Shuttle Atlantis attraction,  a nondescript building behind the towering fuel tanks and rocket boosters of the Atlantis.

An awe-inspiring shuttle launch on film led us through into the dark interior, where the actual space shuttle Atlantis hung from the ceiling, along with a replica of the Hubble telescope. The Atlantis attraction itself is full of simulators  and I learned right away that I can NOT land a space shuttle.

There’s a spacewalk crawl, where kids and brave adults can crawl the glass tunnel high in the sky- really, it’s cool, and a giant slide-landing. Also, there are displays of the interior of the Atlantis: the cockpit, sleeping quarters, toilet, etc., just to give everyone an idea of how life is on the shuttle ( the HUBBLE 3-D movie does a good job at that too). 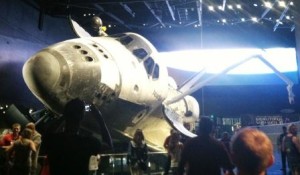 My kids and I joined the other “crew members” for a simulated launch at the Shuttle Launch Experience inside the Space Shuttle Atlantis attraction, for an earth-quaking, roaring Space Shuttle launch.

Then, with customary NASA t-shirt, we departed the Kennedy Space Center all too soon, with tired feet and thoughts of the miraculous feats of man. 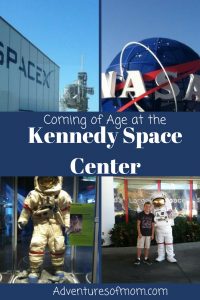 1. Kennedy Space Center is open from 9 am- 7 pm (though closing times in vary- check their website). Get there early.

4. Keep your admission tickets for the bus tour. They ask to see your tickets before boarding the buses for the tours.

5. You have to take the bus tour (included in admission) to get to the Saturn V attraction. It is worth it!  There is a Moon Rock Café there if you get hungry too. You can hop another bus for the 15-minute ride back to the main complex.

6. Check out the hydroponics at the Orbit Café in the main visitors complex, and indulge in the freshly-grown greens in a salad. My daughter loved their futuristic mix your own soda machine too.

7. Do store all of your belongings in the locker (free for up to 2 hours) before boarding the Rocket Launch Simulator in the Space Shuttle Atlantis attraction. The kids giggled as they heard someone’s coins drop out of their pockets- and it was a lot of coins! 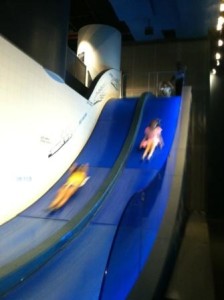 Other Stories that May Interest You:

Previous Post: « Exploring Scott Springs: a Hidden Grotto in the Heart of Ocala
Next Post: A Walk on the Wild Side: Hiking Black Bear Wilderness Area »