Family-Friendly Fun in the Southeast
You are here: Home / Adventures / Top Five Places to Get Your Inner Pirate On

Halloween is right around the corner and my old captain’s hat, complete with feather, gathers dust on the bookshelf ready for my trick-or-treating with the kids. Every year they come up with clever costumes, like a robot or swamp monster, while I don my pirate gear- the same gear I’ve been wearing since before they were born…because I have a secret…I’ve always wanted to be a pirate. Seriously this was all pre-Jack Sparrow & The Pirates Of The Caribbean Movies…yup,  while my friends were dreaming of acting and princesses, I was thinking swords and ships. So I dress up when I can in my alter-ego pirate gear. But now that good old Capt. Jack has made pirates main-stream, now everybody wants to don their boots and sexy shirts and do a bit of swash buckling and now they can- everywhere. 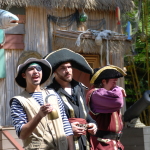 Everybody wants to be a pirate now! Top 5 places to get your inner pirate on

So here’s a list of cool places to get that inner pirate on- it’s acceptable folks, and the kids will have fun too.

The Top 5 Places to Unleash Your Inner Pirate 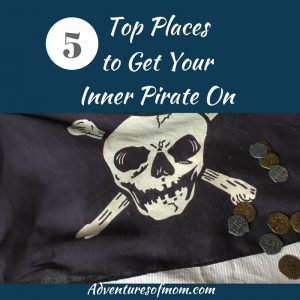 Our own Florida infamous Jose Gaspar, better known as Gasparilla,  supposedly kept his kidnapped women here, safe from his men, when awaiting their ransoms to be paid- he also supposedly kept his treasure here- safe from his crew too…which has never been found. Get the shovels out and explore Captiva for some true treasure hunting. (I am still looking for the gold, folks!) You can celebrate the infamous Gasparilla- in full scallywag dress yearly at Tampa’s Gasparilla Festival!

Sure you can check out the Pirate & Treasure Museum- filled with lots of cool historical facts, sights & sounds, but it was the actual Castillo de San Marcos that was attacked by Sir Frances Drake. And every year in June, St. Augustine holds a Drake’s Raid Re-enactment. So pull on yer boots, grab yer hat and head over the the nation’s oldest city for some good-old fashioned pirate fun. 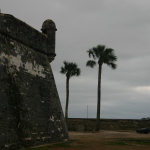 The dashing Jean Lafitte’s stomping grounds. He wined and dined there, fought duels, was despised as an enemy and the applauded as a US hero- go figure! Try the Old Absinthe House (Jean Lafitte Bistro upstairs)& Pirates Alley where all the clandestine meetings took place. Heck, he’s even got a national park named after him! NOLA never goes small- and they have a whole week dedicated to pyrate enthusiasts! Check out NOLA’s Pyrate Week for meet-ups, events & a whole lotta pirate lingo.

Blackbeard-( Edward Teach) is said to have roamed the streets of Savannah, and lured his nefarious crew from the taverns by the river. One such place, The Pirate’s House had a secret tunnel leading from the basement to the river, where drunken souls were kidnapped and loaded onto boats and into pirate servitude. The Pirates House is now a restaurant- you can take the kids- check out the tunnel entrance and look for the ghosts that supposedly haunt the pirate drinking hole.

Gotta save the best for last! The famous haunt of Calico Jack, Anne Bonny, Mary Read and of course Blackbeard as well!  Charleston, considered the most-haunted city in the United States is rolling in pirate lore. You can take a pirate tour and check out the pirate’s house– former home of the formidable Edward Teach and said to still contain Blackbeard’s treasure.  Charleston is a pirate wanna-be’s dream.

So grab that sword, don the hat and get your inner pirate on! Look out for an invasion near you. 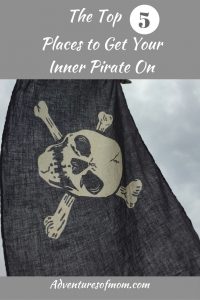