Family-Friendly Fun in the Southeast
You are here: Home / Adventures / Riding the Rails: The Great Smokey Mountain Railroad

A trip on the Great Smokey Mountain Railroad (GSMR) has been a family dream for years. My son, a young Thomas the Tank Engine specialist  since the tender age of 18 months, developed my father’s passion (er obsession) for trains- I remember many a weekend spent riding the rails up North, and the gigantic train board in the cellar that we were forbidden to touch. But my own son’s love of trains led us to the smaller train adventures, like the yearly Thomas the Tank Engine ride in Eustis, Florida and the historic Gulf Coast Railroad Train trip in Parrish, Florida. 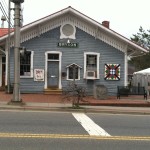 We’ve done the steam engine in Dollywood in Sevierville, Tennessee, the Tweetsie Railroad in Blowing Rock, North Carolina and the train around the Magic Kingdom in Walt Disney World. But it was only this year that the 4.5 hour train trip into the Nantahala Gorge seemed feasible. At a younger age, I envisioned kids running amuck and the ultimate meltdown with a captive audience…Yeah, we really had to wait until the kids reached an able to sit through an entire movie at the theater maturity. 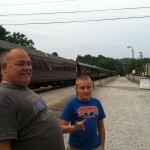 The boys read for the GSMR adventure

I made the reservations on their website and ordered the meal- later glad that I did as the 30-45 minute layover at the NOC would have been to short to enjoy a meal at the River’s End restaurant over the bridge (we did eat there eventually!) and it was nicer to eat on the train and gave the kids something to do- like tour the dining and canteen cars. We hung out on the river during our brief break instead.

Going down into the Gorge, we sat on the left and were afforded the river views, rapids, and white water rafters. We switched places with another family for the ride back (same track) for the caves, waterfall and Lake Fontana with all of its’ cute houseboats. 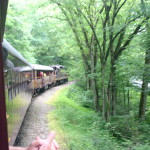 Riding the GSMR into the Nantahala Gorge

I can’t say we actually sat for any of the journey, except to eat. You can stand in the open air gondola car, walk around. The tiny toilets (not for the claustrophobic) are located in the enclosed cars, so we got to check those out too- but don’t hold it til the last minute, as there usually is a line. 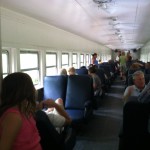 I took the kids through the posh dining car (you can eat  your lunch there too) to pick up our pre-ordered meals at the canteen and we took them back to our gondola car for dining al fresco. Even in July, the air was pretty cool, and when we reached the river itself, it was it an air conditioner had been switched on-natural cooling.

My son remarked on how uncommercial the trip was- even in the museum after the trip, it more resembled my father’s train collections than a advertising fest. A conductor did travel through the train on our voyage back, handing all the kids stickers and coloring books. 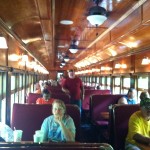 Know Before You Go:

1. Book online. They offer military discounts. (Will call saves waiting in the other lines at the depot too) Choose a lunch option too- it’s cheaper than eating in the Gorge and frees up your lay over time for explorations. Eat during the train trip.

2. The Gondola (open-air) car worked best for us. You can stand-or sit and it was full of families like us. 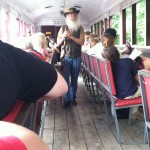 3.Everett Street Diner near the Depot in Bryson City is a great place to grab breakfast before your (morning) excursion begins, but come early, because the locals think it is a great place also and it’s busy 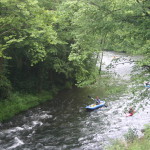 Views from the train of the Nantahala were stunning

4.The train travels the same trip back to Bryson City, and there are white-water add-on options- they bus you back to the depot after your wet adventures. (We might consider that next time around). You can check out your options on their website or there was a whitewater company kiosk at the depot (we were there on a Saturday).

5.Your kids will probably get bored at some point- so consider this. a 4.5 hour trip is like 2 movies- bring some boredom busters. Trips to the canteen car for a bottle of water or snack makes for a great break- (it is cool to walk when the train is moving- watch the young uns though). My daughter and I were counting the different colors of flowers that we saw.

6. You can’t swim in the Gorge during your layover- the current would sweep you away, but right by the NOC there is a place where you can stick your feet in(the steps) just to see how icy cold it is- again, watch those kids! 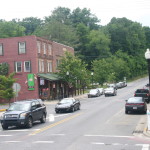 End of the line- returning to Bryson City