Family-Friendly Fun in the Southeast
You are here: Home / Adventures / No Bears: A 2015 Bear-Encounter Review

No Bears: Tallying Up Our 2015 Bear Encounters

No bears. What can I say, 2015 was a total bust in sighting a live bear, and boy did we try! I’ve been obsessed with bear-spotting for some bizarre reason this past year. I’ll put the blame on my dear sister, Sandy, who together with her husband, has had more then their fair share of bear sightings this year (floridahikes.com). For me. I just wanted a glimpse of a bear, preferably in the distance, but close enough for a picture (o’kay, I confess, I am a little Instagram obsessed as well!). I wasn’t looking to befriend a bear, oh no, just respectfully observe one from afar. And I had a feeling that 2015 would be the year we would spot a wild bear.

I took the kids and headed out into the heart of bear country at the Black Bear Wilderness Area in the heart of Florida, all in hopes of spotting a bear. 1,600 acres of bear territory. Not another group of hikers around. We had the wilderness to ourselves.  My sister had seen bears there only a week prior to our adventure- and later on at the same place, but for us, it was merely a walk in the wild: No bears! 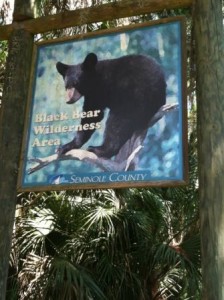 Black Bear Wilderness Area Trailhead- The sign has a pic of a bear- does that count?

Then we traipsed through Tennessee and into the pristine parklands of the Great Smoky Mountains National Park. It was July. Height of bear season. The bear activities were making the headlines, in fact.  But the only bear we spotted was in a display case in the museum at Sugarlands Visitor Center. No bears! 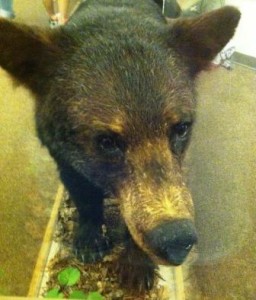 During our Tennessee stay, we drove through to Townsend by Cades Cove and across the Wears Valley. Again, No Bears! Gatlinburg did have some wonderful wooden replicas, created by local artisans, and we found a stuffed bear in the General Store in Pigeon Forge. 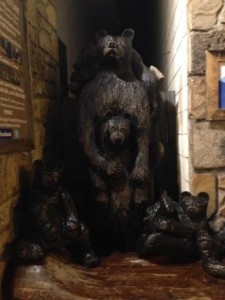 Our off road wanderings through Tennessee and Georgia took us through to the Hiawassee River and a small town called Reliance. We later ended up at the Hiawassee Ocoee State Park. Surely bears would have been frolicking in the river, catching fish and chilling with their bear-friends on a hot summer’s day? Nope: No bears! 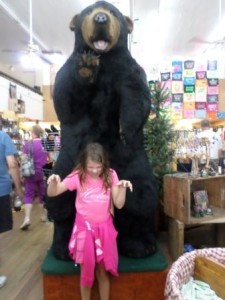 Bear found at the General Store & Co. in Pigeon Forge.

Back in the Florida wilderness, and a trek (or two) through the Ocala National Forest, the “bear warnings” were on high alert. Bears very active this time of year, we were told. But the only furry creatures we spotted were some very hungry squirrels! 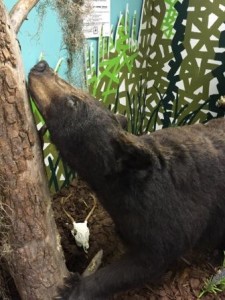 This mama bear was in the Silver Springs State Park Museum: our last bear sighting of 2015!

So I tallied up our bear encounters this year: Live bears: nil. Wooden bears: 147 (yeah, there was a craftsmen’s fair in Gatlinburg when we were there!). Stuffed bears (teddy bears don’t count!): 5   So for us, 2015 was a year with no bears, but as one of the girls said to me: “what would we do if we did see a bear on the trail?” Perhaps it was meant to be, and I have shelved my bear-sighting obsession for now. For 2016 I’m thinking chocolate encounters…haha, okay, maybe turtles… 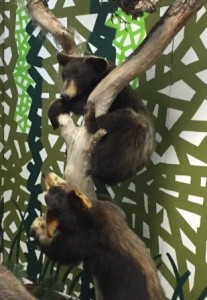 Here’s the thing about bears:  If you DO see a bear- never run away or turn your back.  Check out the North American Bear Center for some tips on dealing with bears BEFORE your next trek into the wild.

Adventures of Mom on Social Media: