Family-Friendly Fun in the Southeast
You are here: Home / Adventures / Inside Dahlonega’s Consolidated Gold Mine

Consolidated Gold Mine in Dahlonega, Georgia 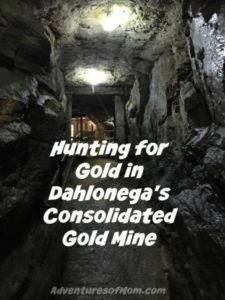 Sure they were on a “tour”, but I had hopes of finding some sparkly stuff!

“Hi ho!” I couldn’t resist singing that song as my daughter and I donned our hard hats and followed our little tour group of ten down into the bowels of the earth.

“Mom- stop!” She hissed at me. Yes, I was now the embarrassing mom, but I couldn’t help it- we were going down into an actual gold mine! With tunnels! Those lottery tickets were just not working for us, so I decided it was time we hunted for gold- and we ended up at Dahlonega’s Consolidated Gold Mine. The fact that there were actual underground mine shafts was a surprise bonus.

Years ago we went ruby mining near Franklin, North Carolina. When I read about it, I seriously thought that we would be using pick axes in tunnels, like those dwarfs, but come to find out, the companies just dug earth from the side of mountains and let everyone sift through it in the sluices. We did find some small rubies and the kids loved playing in the dirt and mud (mainly the mud), but I was a little disappointed. I have always loved caves- real and artificial. I wanted tunnel mining! And now here we were, in the real deal, an underground gold mine and home to the largest deposit of gold ever found in the east coast! 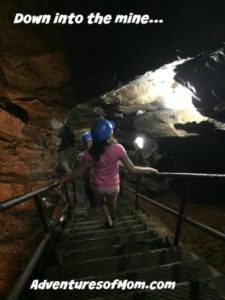 Down into the bowels of the earth we go, like Tolkien dwarfs in search of gold!

1828 brought about the discovery of gold in Dahlonega. There was said to be gold on the mountains and in the rivers for the taking. This brought masses of fortune hunters to the area (about 15,000 men)-all looking for gold. And the gold for the taking with that amount of people looking, quickly vanished, leaving 15,000 men in need of work. The easy gold finds were gone, there was little left in the river for panning, and tearing up the mountainsides was so destructive that it was outlawed, but gold deposits were discovered underground in the bedrock inside of quartz veins, and they began the digging to find it. 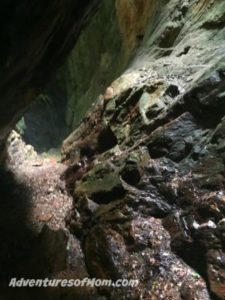 A peek inside Dahlonega’s Consolidated Gold Mine

Consolidated Gold Mine is the site of the largest quartz vein in the world containing gold,  called the Glory Hole, this quartz vein was 22 feet thick – most veins averaged 2-3 inches, so this was a staggering find. Consolidated Gold Mine mined a small fortune from the Glory Hole,  but soon the mining costs overtook the amount of gold mined and the operation eventually shut down. This mine, now listed on the historic registrar, is no longer a working mine, but a museum and tribute to Dahlonega and Georgia’s gold mining past. 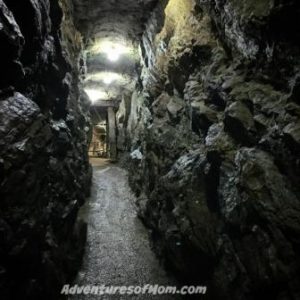 Thousands of men worked these tunnels in the late 1800’s in search of gold.

My daughter and I headed down the steps and into Dahlonega’s mining history.

My daughter, no math slouch, chose the miners’ path. And from there our group learned what entailed a miner’s life- from the daily explosive charges (the holes are still in the wall) and black outs to total deafness. The miners pay would rise for loss of limb or hearing. The guys who set off the charges got $2- paid on a day to day basis. The miners lived a hard life.

We followed our group down through the damp tunnels carved through the bedrock, past stalagmites and stalactites, a quick peek into a flooded portion of the mine, and even by a small waterfall (very small). The gold that was mined here can be seen today adorning the domed roof of Atlanta’s Capitol and also in Dahlonega on the University of North Georgia’s Price Memorial Hall steeple. During our tour, I kept a sharp eye out for some of that sparkly stuff, in case they might have missed it. They can no longer mine for gold here, being a listed historical site, and many portions of the mine are blocked off (or flooded). Steve said the process was too expensive. (Hmm, at today’s gold prices? I was ready to grab a pick axe myself!) Our 4o minute tour was soon over and we returned to ground level.  Afterwards, there was an opportunity to pan for gold from bags of dirt at their indoor sluice (included in the tour price). 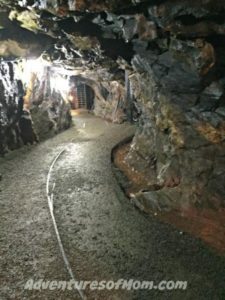 We followed the mine car tracks deeper into the gold mine. 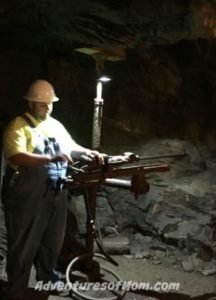 Steve demonstrates the noisy pneumatic drill used by the miners

No, we did not find gold in the mine during our tour, but there were some bottles of gold flakes for sale in the adjacent gift shop.

Things to know before you go: 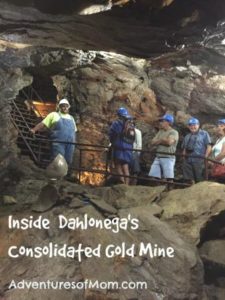 Taking a tour of Consolidated Gold Mine