Family-Friendly Fun in the Southeast
You are here: Home / Adventures / Beneath the Smokies at Tuckaleechee Caverns

Beneath the Smokies at Tuckaleechee Caverns 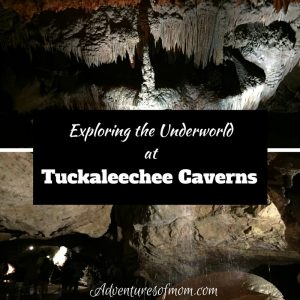 I love caves. I love that sudden drop in the temperature that happens when you find a cave opening- a cool breeze escaping from the underworld, that dank smell of moss, wet limestone, and earth.  I used to squeeze into cracks in the earth, descending into the dark world of the unknown. While some of my school friends were turning on the road to pothead, I was potholing. Other friends were fretting about what to wear to the school dance while I crawling in the mud on my stomach through tunnels so narrow that would question a person’s sanity. What could I say, I was a spelunking fool. So when my husband asked me what we should do on our trip to the Smokies, caving came to mind. Located in the quiet Smoky Mountain town of Townsend, Tuckaleechee Caverns offers a glimpse into the heart of one of the oldest mountain ranges in the world. How could this caving-fool resist? It was time to introduce the kids to the underworld of Tennessee.

The cool air blasted us as we climbed down the steps from the little gift shop into the depths of Tuckaleechee Caverns. We didn’t come expecting much, but as the darkness enclosed us, we had our breaths swept away as we stepped into a 20 million-year-old subterranean world beneath the Great Smoky Mountains.

A drainage gully ran parallel to our path into the underworld. “When there are heavy rains, the water drains into the caverns and runs through here before joining the underground stream,” our guide told us. The area where the caverns are located was named Dry Valley because the water from the rains would quickly vanish. The locals didn’t realize until much later that the rainwaters were draining into the massive underground system below.

As we descended deeper into the earth, we could hear the roar of a river. We rounded a corner and right beside us a mountain stream rushed through the eroded limestone rock formations along a journey etched by time. “We could’ve brought our kayaks,” I said, nudging my daughter, as our guide pointed her flashlight at the stalactite formations on a ceiling high above our heads. I knew if I had discovered these caverns in my youth, I may have never returned topside. 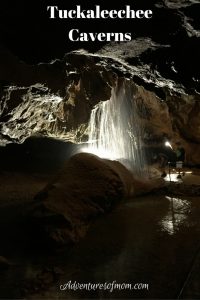 Silver Falls: the highest subterranean waterfall in the Eastern U.S., located in the Smoky Mountains.

The cavern opened briefly in the 1930’s, closed during the depression and was soon forgotten until two friends discovered it during their childhood wanderings. They squeezed through the tunnels, having Tom Sawyer and Huck Finn adventures as only kids do. As they grew up, they decided they wanted to open the caverns for others to enjoy and spent years toiling towards funding their dreams. After much hard work, Bill Vananda and Harry Myers opened the caverns to the public in 1953.

A World Formed by Water and Time

We walked past a rock waterfall frozen in limestone, formed by centuries. “Dew drops on the grass evaporate in the sun or get blown away,” our guide explained. “However, the drops of water from the cavern ceilings have nowhere to go- so they drip to the floor, slowly and patiently forming the stalagmites, or drop from the ceiling forming the stalactites, flowstones draperies, and pillars, one cubic inch a year.”

Jagged teeth and monstrous figures rose from the shadows, the limestone taking shapes under the lights and in our minds. I wondered if the boys had been scared, coming upon these alien rock creatures. We rounded a particularly beautiful grouping of sparkling limestone formations and ascended a slope up to a gigantic cavernous space. We were actually walking a cliff path along the edge of a room- a chamber so big that it could fit an entire football stadium inside of it. This room, more than 150 feet deep, 400 feet long and 300 feet across, was discovered by the National Speleological Society a year after into caverns were opened. 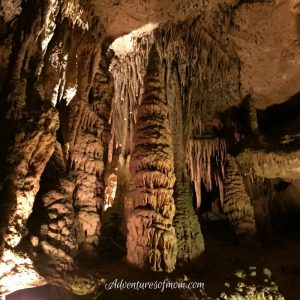 Our guide instructed us to take a seat on the wooden benches built against the wall and then she switched off all the lights, plunging us into utter darkness. We couldn’t even see our hands in front of our faces. “This is what exploring the cave was like for the boys,” she explained. “They would have a gas light and could only see a short distance ahead of them.” Then the lights came on, illuminating the distant formations across the expansive chamber. There were darkened paths beyond, waiting to be explored, but not today.

We passed a traffic jam of three other tour groups, each vanishing to a further part of the cave system, while our guide led us down another set of steps to a little underground beach where we could stop and feel the icy cool rushing water. The ceiling hung low in this region and the path ran alongside the creek until we came upon Silver Falls, a 210-foot falling cascade of water, the tallest underground waterfall in the Eastern United States.We stopped for photos. I lingered around the falls, trying to peer into the darkness, wondering what lay beyond the reach of the light. “Time to go,” my husband said

I lingered around the falls, trying to peer into the darkness, wondering what adventures lay beyond the reach of the light, my childhood caving obsession begging to be released.

“Time to go,” my husband said. We slowly retraced our steps through the passage. One last yearning look. And reluctantly returning to the topside, I left my wild childhood memories behind.

A seismograph placed in a remote region of the cave during the 1970’s helps scientists today monitor seismic activity around the world. But it’s not just earthquakes this special equipment keeps track of– it was the seismograph in Tuckaleechee Caverns that detected a recent nuclear blast in North Korea.

An essential part of the natural environment, bats consume half of their body weight in insects each night, keeping local bug populations under control, however, the number of bats are dwindling due to a spreading disease: White Nose Syndrome.

White Nose Syndrome is a fungus that grows on a bat’s nose, toes, and wing webbings. During the winter months, affected bats fly around during freezing temperatures and hang out near cave and mine entrances when they should be hibernating, resulting in their deaths. Over 5.7 million North American bats have died from White Nose Syndrome.

In an attempt to keep White Nose Syndrome under control, the National Park Services has prohibited entry into all of the caves and mines within the Great Smoky Mountains National Park. Although there are over 8,300 known caves in Tennessee, Tuckaleechee Caverns is one of two of the only caverns left where visitors can still explore the subterranean world beneath the Smoky Mountains. 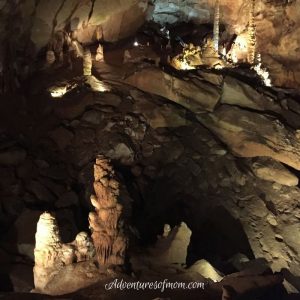 We were like ants in the bigger-than-a-football-stadium ‘Big Room’ inside Tennessee’s Tuckaleechee Caverns.


Things to Know Before You Go:

Previous Post: « Whitewater Rafting in the Smoky Mountains
Next Post: Returning to the Smokies: After the Fire »