Family-Friendly Fun in the Southeast
You are here: Home / Adventures / Things to do in Fanning Springs, Florida

We all end up in a place unplanned and- well, stuck. (I’m talking literally, not figuratively either), like those days in Lucknow, India, waiting for the next train  to Jaipur, or 20+ hours in Saudi Arabia during Ramadan, waiting for a connecting flight. Unprepared, unaware and totally lost about how to kill time.  A pack of cards did wonders during a snowstorm in Budapest airport, a giant ball and impromptu volleyball game during a thunderstorm in the train station in Irun, and hopping onto a city tour in Lucknow showed us places we would have never known existed.

Well, last week I ended up in no-man’s land- a place smack in the middle of North Florida that was, er, in the middle of nowhere. I took my son to an FFA land judging competition near Cross City. After a long drive that began when all humans should still be in bed, my daughter and I dropped him off for the competition and stared at each other, still bleary eyed. Even the coffee & hot chocolate we picked up in Bronson could not shake us awake, and to top it off, it was cold and drizzling. And we had five hours to kill.

If it was just me, I would have holed up somewhere with a pot of coffee and a book to read or write, but my daughter was here, and hibernating was not an option (besides, there were no places to hole up in, besides the Subway back on 19 by the gas station). Thank goodness for smart phones, right? (EEEERT wrong answer!)

I googled the area- Yelp and Trip Advisor came up with ideas 1 hour drive away (and one was a Quilt Museum!) AAARGH! Not gonna fly. We had come through Fanning Springs on the way out to No Man’s Land & I saw the State Park (on HWY 19). State Parks had never let us down before & maybe we would see a manatee, right? (I am maniacally laughing now). 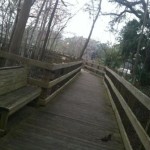 We drove back to Fanning Springs State Park and paid the $6 car entry fee. Still drizzling. Still verrryy cold. The ranger who collected our park fee told us the swimming area was closed as the Suwannee River had flooded- everywhere. Like we would really go swimming today? We stared at the unfriendly black cold water in the swimming hole. 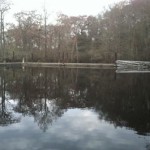 Fanning Springs flooded over by the Suwannee River

No Manatees. Wisely, they had probably headed south to Crystal River. Somewhere warm and sunny! Without the springs- lost beneath the Suwannee floodwaters, there was one short boardwalk and not much else to do. We declared Fanning Springs to be a bust and headed over to Fort Fanning across the road.

Fort Fanning, a city park, had a beautifully decorated entrance and er, not much else (not even a fort or ruins of one). Even the walk to the Suwannee river had been fenced off- banned. Another bust- no fee lost on this one though. 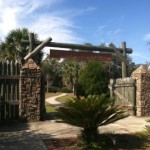 Fort Fanning was a bust

We loaded back into the car. Maybe I should head south to Chiefland, I thought, having passed the Manatee Springs and Blue Springs signs on our drive north this morning. As I turned south on 19, with thoughts of other parks, I saw the sign- a turn off to Otter Springs and Hart Springs (on the left).A side adventure.

Somewhere in following the signs, the roads grew narrower and I lost Hart Springs completely, but we stumbled upon Otter Springs. (No fee) 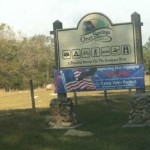 And then we found Otter Springs

The sun had peeked out from the clouds and we were the only souls at the springs- or swamps, flooded by the Suwannee. A lot of difference a bit of sun makes! We wandered along the trail by the swamp and through the woods. No otters, but wild flowers, swamp and birds- lots of birds.  Our stomachs were grumbling after our hike and we headed back to Fanning Springs for a spot of seafood at The Lighthouse restaurant.

“Shall we go and look for hearts at Hart Springs next? ” I asked my daughter after lunch. Luckily she didn’t have to answer. It was time to pick up my son and start the long drive home. 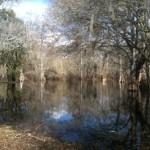 No Otters at Otter Springs, Near Fanning Springs, FL

Sometimes the best places aren’t wired and are found by accident. 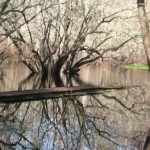