The stalls at the Southeastern Livestock Pavilion lay empty, smells of manure and wood shavings linger in the air. Only a few days ago the “barn” as they call it, was bustling with excitement, stalls overflowing with kids, parents, 4-H Club and FFA Chapter leaders and pigs- lots of pigs (over 200) at the 75th Southeastern Youth Fair (SEYF). 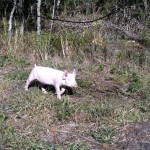 Marvin at the beginning of the Market Swine Project

This was my son’s first year in the Swine project, which started back in late October when he purchased Marvin from a breeder, up until he sold it in the Swine auction on Saturday. (Seminole Feed Stores bought Marvin-Thank you!)

His record book completed and turned in prior to the fair, we loaded Marvin up last Thursday with a friend and his hog and my daughter’s 4-H Club hog- then it was straight to the Southeastern Livestock Pavilion, where the pigs were weighed – they had to make the 230lb mark, or they were sent home. All three pigs made it! (Marvin was 255lbs). Then they were assigned their stall- some doubling up with other kids hogs from their chapters. 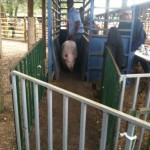 Marvin makes the weight at the SEYF swine weigh-in

The children were then responsible for keeping their pig fed and hydrated (A pipe with a metal nipple on the end works well for water), for the duration of their time there- Thursday thru Saturday. Marvin settled in, the kids changed and took the Swine Skill-a-thon test, one of the many competitions revolving around the Swine Project. 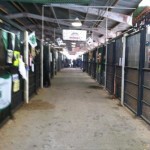 We returned early Friday morning to wash Marvin and the other pigs (it’s good to tag-team with other kids on this one), to get ready for the Swine Showmanship, where the kids walk their kids in the arena with other kids, demonstrating how well they can control their pig and at the same time smile and keep eye contact with the judge. Yes, challenging! The best of the heat chosen then have to drive their pig to the judge and answer questions about their pig (weight, breed, ear-notching, etc) one at a time. 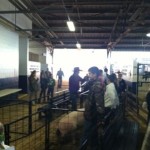 Lining up for Swine Show SEYF

That evening (we camped for the day) during the Swine Show, the same thing happens as in the morning, except pigs are grouped in weight, and the kids walk them around the arena again, but this time only the hog is judged- muscle, fat, build, etc. Then the Grand Champion pig is selected from those winners…which determines the next day’s auction!

Saturday morning is the big day- though everyday since Thursday has been The Big Day. The pigs are auctioned off one by one (price per pound), starting with the Grand Champion (who made a whooping $2,000 this year!), then come the other ribbon winners from Friday night’s show and after that it is a potluck draw. My son made the list right after the winners- some pigs didn’t get auctioned until 2pm and they started at 10am! 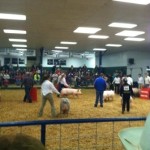 The Swine Show at The Southeastern Youth Fair (SEYF)

Immediately after the auction, the pigs are herded into holding pens, a color stripe on their back determining which place they will end up going. I think I would have been okay if I hadn’t visited the holding pen afterwards- too many pigs in a pen- bloody fights, I won’t give the details, but to see the pig my son raised, the one we walked around the yard- well……<sob> This project is not for the emotional, let’s leave it there. 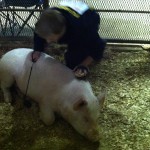 Getting ready for Swine Auction SEYF (Farewell to Marvin)

After all the pigs are auctioned, the kids have to clean out their pig’s stall, sweeping the shavings and all into the center aisle to be removed, and pack up. They fine kids for dirty stalls and take it out of their auction check- also before the kids get to touch that money, they must write a thank-you letter to the buyer or buyers and a thank you letter to a sponsor of the SEYF Swine Show.

Whew- if that doesn’t teach some responsibility, I don’t know what will! My son plans to pay off his pig loan and put the rest away for next year’s swine!

1. In order to participate in the SEYF Swine show, your child must be a member of either 4-H or FFA .

2. The project sign up and initial $10 SEYF fee is due in September (it was the 9th this year) It is a mandatory meeting- so keep an eye on the website for the date and time.

3. Show pigs run from $200- $250. The entire project costs about $500(they eat a lot!) Some farm Credit Unions do offer Swine Project loans. I heard swine insurance is offered as well.

4. Kids buy their pigs at the end of October, early November (see the Club leader for Swine Breeders), then they must be tagged (they can only have one pig!) at the pig tagging- date usually in November. Also there is a mandatory Pork Quality Assurance meeting to attend- swine handling safety.

5. Kids must keep records in their official record book- downloaded/printed from http://www.SEYFair.com  (Market Swine Project). They keep records of food costs, supplies, medications administered (i.e. wormer, etc.). They keep photos of their progress with the pig and write an essay at the end of their project ands turn it in with the Sponsor thank-you letter. Buyer letters to prospective buyers (local businesses usually) must be written and sent out prior to the show. The more buyers your child has contacted, the better chance of their pig fetching a higher price.

6. The participants in the Market Swine project must compete in: the Swine Showmanship(Friday AM), Swine Show (Friday PM) and Swine Auction (Saturday AM) & complete the record book. Skill-a-thon (pig-info quiz) and herdsman (decorating outside of your pig’s stall) are not mandatory as of this year- but check the rules to see if that changes!

7. And then onto the fair! The auction money goes to the child (less their handling fee). And,  Yes, these kids that do this every year are AMAZING! And so are their parents! 😉 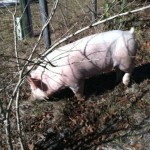 Previous Post: « Things to do in Fanning Springs, Florida
Next Post: That Diary of a Wimpy Kid Kind of Mom (Or Recognizing Yourself in a Book) »