Family-Friendly Fun in the Southeast
You are here: Home / Adventures / Returning to the Smokies: After the Fire

Summer in the Smokies Series

After the Fire: Returning to the Smokies 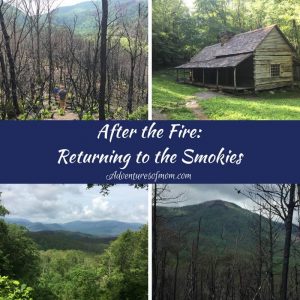 After the fire, we returned to the Smokies in search of fire damage. These are not before and after photos- All of these were taken the same day on Roaring Fork Motor Trail.

Returning to the Smokies

“I think we need to go the Smokies this year,” my husband said, over dinner as we discussed our summer vacation plans.

“They need money- to help rebuild their economy.” I am beginning to suspect my husband may be the smarter of us both.

I booked a hotel. Warily. I actually called them directly and asked about fire damage. They said there was no fire damage at all.

The news of the Smoky Mountain Fires still lingered in my mind, imprinted from the media stories I had seen. Would we be greeted with charred remains of buildings, reminiscent of a war-torn nation? I remember traveling through Homestead in 1992 after the category 5 Hurricane Andrew devastated the Southern Florida landscape. Would the Smokies look the same? That had been in November, and now we were facing July. The news media coverage had long since turned their cameras onto other stories, leaving the Smoky Mountains in the shadows, forgotten.  We headed north into the mountains with a mixture of trepidation and curiosity, unsure of what we would discover.

The 2016 November wildfires that swept through the Great Smoky National Park burned over 17,000 acres of park lands, destroyed or damaged over 2,400 structures- mainly residential dwellings and resulted in 14 deaths either directly or indirectly. There were two active fires at the time, the Chimney Tops 2 fire and the lesser Cobbly Nob fire.

If you drove on the Parkway from Pigeon Forge to Gatlinburg now, you would have to hunt to notice fire damage. Downtown Gatlinburg and the entire city of Pigeon Forge remained unscathed, but although the fires are out, the after-effects have hit the local residents and businesses hard: lack of tourism. 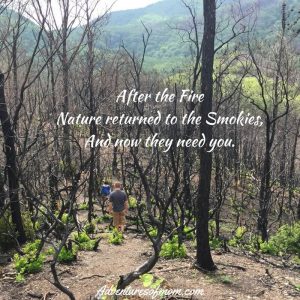 After the fire, nature returned to the Smokies. Now they need you.

A server in one of the pancake houses told us  the residents who lost their homes in the fires are being helped by Dolly Parton’s Fund My People initiative (Mountain Tough Recovery Team), community funds, grants, and donations, but the others, herself included, who rely solely on the tourism dollars, are suffering from the lack of visitors. “This place should be packed- and it just isn’t.” The impacting damage done was not by the flames, but by the public misconception that these gorgeous mountain towns were lost.

Bouncing Back from Tragedy

These mountain communities are pretty resilient, like our hurricane-battered coasts in Florida, where I live. Last summer, the east coast of Florida received the brunt of not one but two hurricanes- the last one saw waves of water washing through Jacksonville and submerging many parts of historic St. Augustine. But the waters subsided and the folks hung out their carpets to dry, as they have done for years, and visitors now would never have guessed what had happened there before.

Like Florida coastal areas, the mountain towns have cleared the rubble and are bouncing back, ‘mountain tough,’ as Dolly Parton named her Fund My People initiative. They are ready for visitors.

The Great Smoky Mountains National Park is one of the most popular National Parks in America, but since the fires, people have been shying away. Pigeon Forge alone has 14,000 accommodations- from hotel rooms to cabins and campsites, and they only have 6,000 residents, the majority of whose livelihoods rely on tourism dollars. The truth of the matter is these communities are open for business, but they need you to help them recover economically. They need your business. 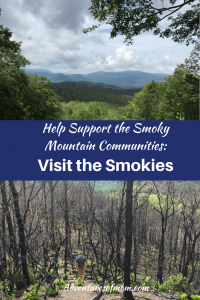 The Great Smoky Mountains National Park encompasses 520,000 acres of land.  17,000 acres burned. That was .003% of the land.  There are 150 hiking trails through the Smoky Mountains. Five trails are currently closed due to fire or storm damage.

There was no fire damage in historic Cades Cove or on the Little River Road, where the popular swimming hole, Metcalf Bottoms is located.  Buses ran tubers up and down the road to the tube launch point in the park while we were there. (Yes, you can tube your way out of the Smoky Mountains National Park! You can also whitewater raft in the Smokies– but that’s a whole other story.)

On our drive on 5.5 one way Roaring Fork Motor Nature Trail in the park, we did witness fire damage. Stopping at the historic Ogle farmstead, we could see where the fire had swept around the surrounding forest. Driving past Rainbow Falls Trailhead, we came to a scenic overlook and had the opportunity to walk on a trail through a scorched area of the Smoky Mountains National Park.

Though we were surrounded by burned and blackened stumps, we were afforded a clear view of the surrounding greenery and mountains. And although our path was clear, tufts of bright greenery had already begun to sprout around the burnt tree bases and over the scorched earth.

“It’s like a prescribed burn,” my son said. Our kids have been involved with land management and conservation practices through their involvement in an annual Soil and Water Conservation Project, and one of the practices they were familiar with was prescribed burning. Prescribed or controlled burns are used to get rid of the undergrowth and underbrush in forested areas to help prevent hotter wildfires, control pests and improve the health of the ecosystem.

“I don’t think they allow prescribed burns on national park lands,” I told him.

He pointed out the new growth around us. “Nature always wins.”

We headed back to the car and drove less than half a mile away to the next overlook. I was thinking I’d get a photo of the burned mountaintop, but the growth around us was so thick that I couldn’t. We didn’t see more fire damage after that until the very end of Roaring Fork Road.

We drove through Pigeon Forge, past the multi-level go-kart tracks, the fudge shops, the Mountain Wheel at The Island, and the Alcatraz Crime Museum to reach our dinner destination, and it was clear to see that yes, they were definitely ‘open for business.’ And no, they weren’t charred ruins and it didn’t smell like smoke.

We thoroughly enjoyed our visit to the Smoky Mountain area, hiking in areas we’ve never seen before, rafting, and caving. This region has so much to offer visitors, and combined with the Tennessee hospitality of the locals, is always difficult to leave. 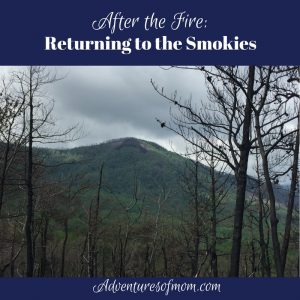 The Chimney Tops 2 fire was started by a pair of young teens, 15 and 17-years old. They were acquitted of the charges while we were visiting the area. Under the right conditions with that kindling undergrowth, fires can quickly escalate and get out of control. This fire was serious stuff, and affected a lot of people, definitely, something to remember before flicking a cigarette butt out of a car window, leaving that glass bottle lying on the ground, or starting a campfire outside of the designated campfire areas. The Smoky Mountains National Park does not allow campfires in the backcountry areas. A hike through that scorched trail on Roaring Fork can put things into sobering perspective for kids and adults alike.

The Smoky Mountain towns need help and the best way to help these communities is by planning your next vacation in the Smoky Mountains. Stay in their lodgings, eat in their restaurants and enjoy the attractions. Nature returned to the Smokies, and now they need you. 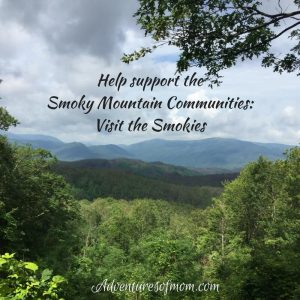 More stories in this area: