Family-Friendly Fun in the Southeast
You are here: Home / Daily Life / That Diary of a Wimpy Kid Kind of Mom (Or Recognizing Yourself in a Book) 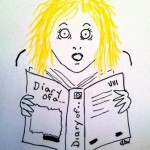 I was reading my daughter a bedtime story the other night (yes, kids still enjoy being read to- even the older ones!) This was the The Long Haul, the latest book in Jeff Kinney’s Diary of a Wimpy Kid series. If you haven’t read it yet, I won’t give any spoilers, but a quarter into the book, when young Greg Heffley starts describing his mother, I put down the book, looked at my daughter and said: “That’s me! I’m Greg Heffley’s mom!” (Okay, I sort of wailed it, if you really want to know.)

She did not miss a beat and nodded in agreement, as if she knew this fact all along. “Yup.” (Mrs. Heffley writes, loves books, trys to make everything a learning experience, that foreign language thing…..argh- just read the book!)

We have been following the Diary of a Wimpy Kid books since the first one came out. The collection stands in a place of honor in my son’s room. My kids have eagerly drooled in anticipation over the next book premier: they’ve brought home those Scholastic Book Flyers, waving them excitedly: “Look! A new Diary of a Wimpy Kid book! Can I have it? PLEASE!!!!” I swear, this book series elicits far more joyous anticipation then a proposed trip to the beach!

They have both read the entire series (more than once, I might add), and despite my Daily Reads, no, they are not the book geeks that I once was, but something about Greg Heffley and his brothers: Roderick and Manny they find compelling. Or perhaps it’s the fact that Mrs. Heffley reminds them of someone closer to home…..me!

The Diary of a Wimpy Kid Series is great for 4th graders and up- there’s a list of them on Jeff Kinney’s official website. Chances are your child’s school library has it (with a waiting list)- check your local library too! They also came out with three family movies based on the series :  Diary of a Wimpy Kid, Roderick Rules, Dog Days- but read the books first!

Have you ever recognised yourself as a character in a book?