Family-Friendly Fun in the Southeast
You are here: Home / Adventures / Tale of Epic Fail on the Florida Trail

Sometimes life doesn’t go as planned, and I don’t mean that wonderful getting lost and finding something cool adventure, like my daughter and I did in New Smyrna Beach, or climbing some rocks and finding a neat beach like we did in Apalachicola,  but the EPIC FAIL.

When you have kids and involve them in your adventures, you are introducing a myriad of personalities to handle during the day- not everyone will be on the same page- heck, they usually aren’t! I can look back at blog posts and think, yeah, my son was complaining he was too tired, or my daughter stubbornly refused to walk…you have kids, so you deal with the highs and lows daily. I recall a melt-down of Himalayan proportions at Chimney Rock- the temper tantrum to end all tantrums. My daughter was three at the time- and wanted to walk everywhere. Taking her up the highest point first was not a good idea (Take the elevator up, folks, and walk down if you want to see anything else in the park!) And then my son fell into the river…. What started out as a sunny fun day in the North Carolina mountains turned into an…EPIC FAIL. Luckily no one was hurt, tantrums tend to need naps and we forged on,  a little wetter, a little wiser. 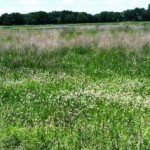 This weekend had me champing at the bit (and no, not because the Kentucky Derby was on) maybe it was the full moon. I’ve been following blogger adventures: Candice Does the World was in El Salvador, the Goats on the Road were in Cuba, Wandering Earl at TBEX in Spain, and Nomadic Matt in Montana, and I was home, gardening, not doing anything extraordinary, feeling inadequate as an adventurer, as a writer and as a mom, and even a little jealous of these other bloggers,- we had to do something- it didn’t matter what (as long as it was cheap and cheerful), I decided with zest and zinger, so I dragged the kids out- taking a vote in the car: walk or beach? (My daughter was immersed in an electronic game and apparently didn’t hear the question- as she would adamantly insist for the next hour or so) We settled on  a hike in the woods. There is a portion of the Florida Trail near us that we hadn’t yet  explored.  Sure it wasn’t cliff diving in Japan or salsa dancing in the streets of Havana, but it would have to do, as long as we were doing, right? 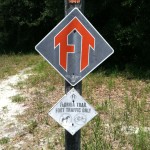 I donned a day pack filled with water bottles (always carry water!) and we set off down the gravel path that gave way to dust. It had not rained for over a week and already the Florida landscape was drying up.  The trail was flanked on both sides by wild flower filled marshes.

My daughter dragged her shoes, lagging far behind. “I don’t want to walk!” She moaned. “I want to go home.” (I knew from experience that it was her game she wanted, not really home).

My son and I, side by side, stopped to watch a butterfly hovering over a flower. He said: “Thanks, mom, for getting us out. This is nice.”

If you live in Florida, chances are there is a part of the Florida Trail near you. The 1,300 miles of trail  stretches from the Everglades  to Pensacola in the Panhandle . My sister, a.k.a. “The Navigator” or “The Trail Lady” has written and travelled extensively on the Florida Trail (she even has a trail app- clever girl!).  I’d never been on this section before, and was surprised about the swampland. What was out there? Did I  hear the grunt of a gator? A wild hog rustling through the undergrowth? Were deer shyly watching us from the trees?

My son and I did find some coyote scat- full of fur: “Must have eaten a rabbit,” he said. But the ground was too hard to see any tracks. 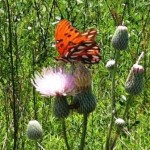 Beauty is in the eye of the beholder-The Florida Trail

My daughter dragged and complained the whole time, oblivious to the beauty of nature around her and the warbling birds: determined to wallow in self-misery, and also reminding me that you can not force someone to do an adventure. I thought of Chimney Rock again.  You cannot push the unwilling. After an hour,  I finally succumbed- there is only so much you can ignore, as a headache lingered on the back of my head. Though my son was eager to continue into the dark forest ahead,  we turned around and headed back, adventure aborted: EPIC FAIL emblazoned in red over the day. Candice, Nick and Dariece, Matt and Earl may be wandering in distant lands, but they don’t have the multiple-little personalities to juggle on their expeditions. Adventuring with kids is fantastic, especially when everyone is on board, but far from easy.

How do you handle an Epic Fail? 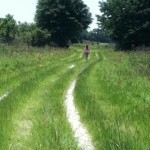 Adventure aborted: my daughter storming off on the Florida Trail

Warning:  proceed with caution-travel envy/extreme life-style alterations may ensue by reading their blogs!