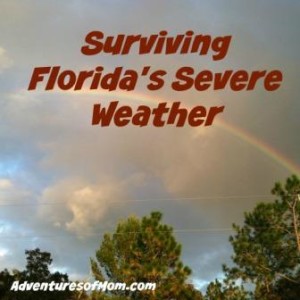 There’s light after the storms…and sometimes even a rainbow!

Today’s blog post was meant to be about a hike my daughter and I took this past weekend, but then we were struck by the Florida weather. After three days of beautiful sunshine and so warm let’s-go-snorkeling weather, I was convinced that winter was behind us, and ready to embrace spring, and then BAM rolled in our mega-storms, with another dose of winter cold following on their coat-tails. Florida is notorious for mini-hurricane-like storms. Us folks in Florida are accustomed to facing bizarre meteorological elements that this crazy southern state throws our way: extreme high winds, torrential rains, numerous lightning strikes, devastating tornadoes, and hurricanes. 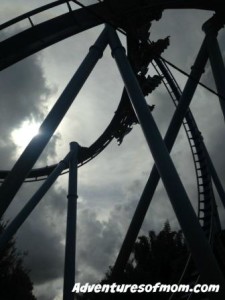 Florida theme parks close their outdoor rides when the threat of lightning is imminent. This roller coaster was shut down just before that storm approached and park guests were told to seek shelter immediately. (dark clouds in the background)

I think everyone I know has a lightning strike story. Central Florida is known to be the lightning capital of the world and it is not uncommon to hear about someone’s computer getting fried, their telephone being knocked out or a tree being hit. On different occasions, we have had our computer toasted, the telephone blown, the oven cord melted, and several of those tall pine trees hit- they make prime lightning rods!

I was out on Lake Rousseau in Crystal River once with my husband and his nephew in a boat racing away from a storm when lightning struck one of the mile marker signs in front of us. It exploded into a million pieces. Scary stuff.

With an electrical charge of up to 50,000 volts, we appreciate and fear the power of lightning. At home, when we hear the storm approaching we unplug our computer and television completely. The lightning goes through the lines and replacing them is no joke. If the storm is severe enough, I’ve been known to disconnect the landline as well. Parks tend to kick everyone out of the swim areas when storms approach, so it’s time to pack up and seek shelter.

Florida is regularly hit by torrential, flooding rain, and I am not talking about those hurricanes. Known to be 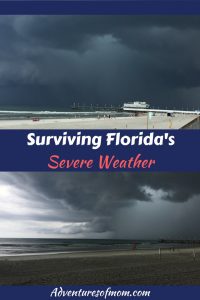 one of the wettest states in America, these monsoon-like mini-hurricanes strike our state on an almost daily basis in the summer and a lot of the times like clockwork. One minute it’s beautiful and sunny, the next you can’t see the car ahead of you- heck anything ahead of you and the roadsides (even the roads at times), are submerged under water. Then an hour later again it is bright and sunny. Everything dries up and all evidence of the storm is quickly erased. It’s crazy!

These mini-hurricanes can become deadly if you are traveling. I remember driving through the Ocala National Forest on route from Daytona and not being able to see the road ahead. I pulled into a State Park entrance- and my friend and I sat in the car for an hour until the rain let up. I’ve seen people pull over to the side of the road, even on the interstate during these hazardous rains, and others drop to extremely slow speeds. Getting caught out in one is no picnic, as they are commonly combined with lightning and high winds. If you have the choice, stay put and don’t battle our torrential rains. This is Florida. Nature triumphs.

Being a peninsula without any mountainous windbreaks, we are a windswept state. As anglers, we tend to take note of the wind and pay attention to the high wind advisory notices. It’s just common sense to note the weather.

If there are white caps on a lake, that’s a warning of high winds. Canoes and kayaks are almost impossible to enjoy on a windy day. Fighting a current and wind is hard. Right after our wedding in Key West, we tried to rent a fishing skiff for the day and were turned away because there was a high wind advisory out. We ended up fishing from the bridges (I actually snagged a shark on my wedding day!)

There are those who choose to ignore the warnings and brave the elements. Some have to get rescued. There are some who even sadly enough, die. Pay attention to the weather and make smart choices.

I was heading out this morning when I got that tornado warning, so despite the few peeks of sunshine, the squalls have been coming and going all morning, and I am forcing myself to stay put.  Last night tornadoes struck the Florida panhandle and also other Gulf coast states. Devastating and unpredictable, tornadoes are downright destructive and deadly.

Years ago, I remember my brother coming home from work on a stormy night. His eyes were wild as he told us that he had a tornado literally chasing him down the road. Some crazy people follow these wind-devils, but smart people run! Another time a tornado swept through a restaurant where I worked. Luckily it was closed at the time, so no one was there to get hurt. The guests at the hotel behind it weren’t so lucky, as every single car in the parking lot had their windows blown out. Pieces of metal were literally wrapped around trees. We sifted through the debris and helped put the place back together.

Yet another time, I was running the kids to school and the sky up ahead had turned an angry purplish black and the hair on my arms had stood up. “I’m turning back,” I told my kids. “I am NOT driving through that! I’ll take you in late when the storm clears.” As it turned out, we learned later that their school went on a lockdown and tornado drill as a tornado touched down nearby.

Hurricanes come with warnings and advanced evacuations, but tornadoes arrive unexpectedly. An approaching tornado sounds like a freight train. You can even feel tornado conditions in the air: very windy with cool air mixing with warm air. Check out the NOAA tornado safety link to learn more.

Hunkering Down in Florida Hurricanes

I have been through many hurricanes. I’ve partied through some (before kids), played Frisbee in others, stayed at Disney World in one, and hunkered down with family through many more. In the north, they have their snow days, and down south we have our hurricane days. Hurricanes are a part of Florida life.

My parents would make us kids tape up all the windows before an approaching storm, and we would track the storms on the hurricane maps that Publix thoughtfully printed on all of their summer paper shopping bags. We’ve lost many trees due to hurricane winds (I saw tall pines bend over sideways and almost kiss the earth during one hurricane) and we’ve had electricity knocked out for days. I’ve friends who have lost parts of their houses due to hurricanes.

Yes, Florida has some severe, mind-blowing weather, but it doesn’t last. The storms trundle off into the Gulf or Atlantic, the winds subside, the rainwater gets sucked back into the sandy soil, and we welcome that beautiful sunshine back. So while the northern American states are facing their snowstorms, we are riding a much different wave down here on the Florida peninsula.