Family-Friendly Fun in the Southeast
You are here: Home / Adventures / Stranded on the Withlacoochee River: A Mis-Adventures Of Mom Tale

Stranded on the Withlacoochee River: The “Misadventures” of Mom 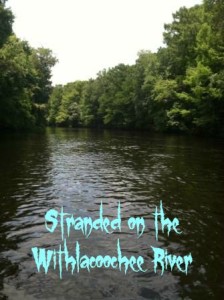 Stranded on the Withlacoochee River: a Misadventures of Mom Tale

The funny thing about accidents is that you never know when they are about to happen- that’s what makes them accidents. You can be prepared for anything that life may throw your way and wham-o, something new and unexpected, and the only thing you are armed with is hope, prayers and staying calm. Boating accidents are common in Florida, land of a ka-zillion lakes, ponds, water ways and oceans. I’ve seen canoes flip (that’s you, dear Sis!), sink,  boats get stuck (that was me and my other sister), motors die, and completely fall off the boat! This year has been pretty bad as far as boating accidents, there has been at least one every other week that has made the news. And several that haven’t.

Our return from Tennessee brought a slew of severe weather, so the one morning that the sun dared to shine, we headed out for the Withlacoochee River. We had paddled the Withlacoochee in a canoe previously, but the recent rains had raised the river, and we decided to risk the dark waters in a motor boat. 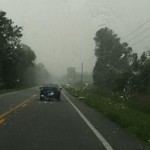 We saw nothing but severe weather on our return to Florida.

It was a beautiful morning, but I could smell rain in the air- that sweltering mugginess that any Floridian knows all too well. Traveling up river with a motor is far easier than fighting it with a paddle in a canoe, and soon we were out of the dark cypress swamp and into the open river- reeds and hydrilla lining the lakes, the white puffy clouds joining hands overhead, prepping for an afternoon storm, and amidst all the wonder and beauty, our boat engine sputtered and died. We got it started again, turning around and after coughing out black smoke, it gave up the ghost for its’ final time and silence settled over us. 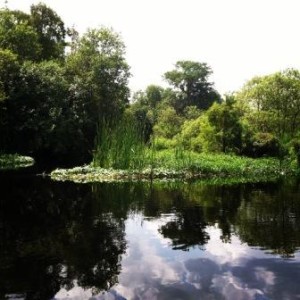 The dark cypress swamps open up the further we traveled on the Withlacoochee.

Silence in a swamp doesn’t last very long, and ours was broken by the loud croak of a gator in the bushes on one side and the answering gator on the other, not to mention the swell of the cicadas, playing their music. We broke out the emergency oars and soon began the slow meander back down stream, like Tom Sawyer and Huckleberry Finn, poling our ungainly raft along the dark waters. We had fought the current coming, but it seemed to have died for the most part going back. In true style of Mark Twain’s fictional characters, the kids threw a couple of lines in, with hopes of catching dinner along the way. The oppressive heat had risen to a crescendo and an ominous thundering boom warned of an oncoming storm. 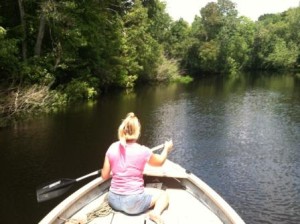 We floated on the Withlacoochee like Tom Sawyer and Huckleberry Finn, paddling our ungainly-sized metal raft.

Let me tell you, we had not passed a single soul on our journey up river. And apparently not many people like houses on this portion of the river either. It was literally swamp- endless swamp. 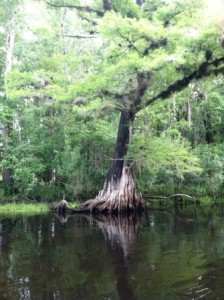 If you need to get away from all civilization, a trip on the Withlacoochee is the way to go, but if you are in trouble, well- just don’t be! We had bottled water-( there was no way anyone would be tempted to drink from the tea-stained waters we floated) and a couple of bags of Cheetos I had tossed into the boat. We also had a working cell phone, but there was no hurry. Our other plans for the day were chucked to the humid air and we decided to enjoy the float. And then we got stuck.

Getting stuck in a canoe is not too bad- it happened to me when I did the Juniper Run right after Hurricane Andrew paid Florida that horrendous unforgettable visit. My sister, Susan, and I had to get out in waist deep water, with alligators calling out around us (it was mating season). We dragged that canoe over fallen trees several times that day, making us think that canoeing after a bad hurricane was not the brightest thing we had ever done. But today we were in a motor boat. With kids. In  murky swamp waters. Yeah, I was NOT going to get out of this boat! When the current had finally picked up, we managed to get lodged across a fallen cypress tree. We tried rocking the boat, nope- poling it backwards (current was swift now)- nope. 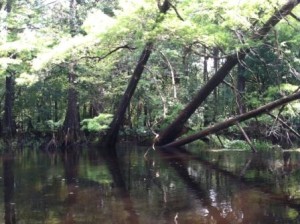 Trees fall all the time along the Withlacoochee River. Will these be the next to snag some poor soul’s boat?

Luck had it, a boat came by! Prayers answered, because hopping off the boat was the next option, and I had seen a seven foot gator not too long ago…We got a tow for a portion of the journey back (thank you, couple with beautiful dog!), parting ways before the rapids that we had canoed on our previous adventure. So down the rapids,  and again we managed to get our ungainly raft stuck on rocks. By this time, hot and sweaty, I WAS ready to jump in. The storm was imminent. I had no wish to be stuck on the river with our famous Florida lightening strikes for company. 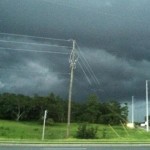 I had no wish to be stuck on the river with our infamous Florida lightening bolts as company.

In a superhero move, clever husband swung the anchor like a lasso, latching on to the river bed beyond and pulled us to freedom. We had the boat loaded as the first heavy drops began to fall, the finale of our Withlacoochee misadventure. Ironically,  during the darkest part of our journey through the swamp, surrounded by the sentinel cypress trees that obliterated the sky, I thought of the Indians who had hunted along this river- and wondered if their spirits lingered and preferred the songs of nature to the roar of the boat engine. Why was this river so void of people and signs of civilization?  Maybe it had not just been an accident after all….. well, maybe. 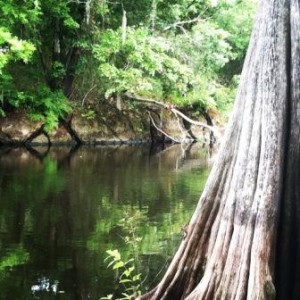 I don’t think anyone would be tempted to drink from the black muddy waters of the Withlacoochee River.

1. Make sure you have enough gas to get you there and back.

2. Carry a cell phone for emergencies.

3. Carry a flare & whistle (remember that Titanic movie? The whistle saves her life- apparently it’s a Florida Law too!) As are life jackets– make sure there is one for everyone.

4. Oars come in handy on a motor boat- as we know- and we’ve had to use them more than once!

5. Drinking water! Pack it. It is a necessity, not a luxury! We went through all of it before we reached the boat ramp! Snacks are good too.

6. Something to use for shade– be it a sun umbrella, hats, big t-shirt to tie around your head. Florida sun can be brutal!

Most important: Always let someone know where and when you are going in case you do not return!!!!

If you were stranded on the Withlacoochee, what would you do? (Panic is not an option).