Family-Friendly Fun in the Southeast
You are here: Home / Daily Life / Connecting With Your Kids / Stop Peer Pressure: Give Your Teen an Escape Plan

Picture this: practice ended early and your teen is hanging out after school with a group of kids. One of them lights up a joint and starts passing it around. The other kids start egging each other on to take a puff. What will your child do? Do you really know? Peer pressure has a powerful influence on kids. It puts them in a corner where there seems to be no escape. If they take that puff, they’ll feel accepted- one of the crowd (and teens usually prefer to be a part of the group). If they refuse that puff, they fear getting teased mercilessly, even ostracized. (Yes, I know, you don’t want them having friends like that anyway- but in school, those choices are not yours to make). You may not be there to stop your child, but you can give them an escape plan to help them eliminate the power of peer pressure in this kind of situation.

Bert Fulks, a minister who works with teenage recovering addicts (yes, you read that correctly), asked his group if anyone had ever been involved in a situation, pressured by their peers, where they felt they had no way out. He received a unanimous sobering reply of “yes.” Peer pressure is a huge problem that impacts the decisions a child makes- for better, and unfortunately, for worse: from what clothes to wear, a hair style, shoes and whether or not to try that cigarette or take that drink. 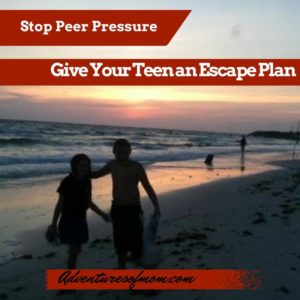 Over the past week, at the fair,  I’ve sat on the edge of conversations, listening as kids joked and laughed about the smoking, drinking and even drugs that went on at the different schools. This kid got arrested for that- another was caught smoking on a bus, kids smoking in bathrooms– it got me wondering if my own children have been put in any awkward peer-pressured situations.

I remember being offered coke when I was young- not just offered, but heavily pressured- but not wanting to stick anything up my nose because the thought was gross, I blatantly refused. Ugh! But I was a weird, geeky kid- how would someone else have reacted? Would my kids have given in? And how could I head the problem off at the pass? How could I eliminate the power of peer pressure?

Making an Escape Plan for Your Kids

Bert Fulks came up with an unbelievably clever exit strategy for kids.  In fact, he takes the teen escape plan to a whole new level: After learning about the problems of peer pressure, he devised Plan X: where he told his kids, whenever they feel pressured/backed into a corner/find themselves in an uncomfortable situation, all they needed to do was text him or his wife the letter “X”. Immediately one of them would call the child’s phone and say there was an emergency and they needed to pick them up straight away. Thus they neither give in to the peer pressure situation nor do they lose face.

Fulks adds that when they pick up their kid, they have a pre-arranged agreement not to ask any questions. If their child wants to tell them some/all details or none at all, it’s up to the child. He mentions that many parents don’t like the no-tell policy, but I agree with Fulks. As a former teen myself, I can see the trust issue: your child won’t trust you to rescue them if they are going to face an FBI interrogation or punishment- they would rather succumb to the peer pressure. Hard pill to swallow, but what would you have done as that teen?

Though you don’t have to use “X” as your emergency code- so many kids grab each other’s phones that maybe a word like “pancakes” or “sushi” might work better- whatever works best for you and your child. And if your teen is driving, and they have been drinking, have them add another code letter to that X- like Xz or PancakeZ- so that you can go and get them– do NOT let them drink and drive!!

I have used an escape plan for our kids over relationships for many years now – well, it’s more of a dictatorial decree- after hearing of budding relationships in elementary school, I firmly put my foot down as far as girlfriends & boyfriends: Absolutely no relationships.Friends are fine, but no girlfriend/boyfriend. Schoolwork comes first. Renegotiable when you turn 16.

So and so dating one guy this week and another the next- it’s like a game and the girl always ends up with a sour reputation in the end. Kids are too young to tie themselves down to one person. Kids are too young to be pressured into having sex- and kids are too young to have babies. They should be enjoying their childhood, not facing relationship issues! Yes, harsh- but it offers the kids an out: “Sorry, I can’t be your boyfriend/girlfriend. Yeah, my mom’s evil, I know, but what can I do?”

Develop an Exit Strategy for Your Kid

Sit down with your teen now. You can even do this with the younger kids. Talk about peer pressure & feeling uncomfortable. Let them know they are NOT trapped. They have a way out. Develop a secret code and stop the power of peer pressure by giving your kids an escape plan.

10 Things You Should Do When Visiting Georgia

6 More Weeks of Winter, And That’s Alright By Us!

Journey to The Edge of The World