Family-Friendly Fun in the Southeast
You are here: Home / Adventures / Cedar Key Adventures

Ah, the very words Spring Break invoke crazy all-nighters at Daytona and the Keys, beach patrols and too much coconut rum! But alas, I fear the only thing gone wild around me now are two young ‘uns and a rogue jelly fish. Ah, times do change! Though I did manage to slip glass or two of white wine late one evening over some incredible sushi.

These kids gravitate towards water- I could use them as divining rods! The week started out perfect, but as the icy snow storms struck up north, we too in the sunshine state felt the brrrr- chilly effects and had to pack away our flip flops for a couple of days. But did that stop us from hitting the beach—heck no! 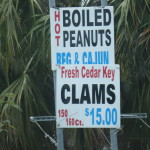 We were thinking the Keys, so Cedar Key came to mind- didn’t have to drive past Miami. Cedar Key is the world’s largest producer of clams- clam chowder, fresh steamed clams. Clams are good- and filling. The shops were mostly closed and the boats to the nearby island weren’t running, due to such a blustery day. Not sure I would want a trip to the nearby Snake Island or Rattlesnake Island for that matter. Where are those butterfly and pony islands when you need one?

Brr- cold- but note the bare feet! The white sands are shipped in near a nifty playground on the water front. 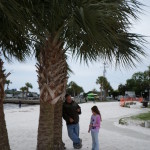 I suspect she is negotiating for ice-cream with dad. 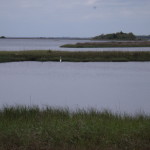 After Cedar Key we took a side trip to Shell Mound. A little (free) park about five miles away down a rickety road, but worth the bumps. The trails lead around the giant shell mound- the place the Indians buried their dead, with incredible views of the gulf. There’s a campground right next door- but bring the mosquito spray!