Family-Friendly Fun in the Southeast
You are here: Home / Adventures / Riding the Rails at Dollywood in Pigeon Forge, Tennessee

Family Adventures Beyond the Pigeon Forge Parkway: Riding the Rails at Dollywood 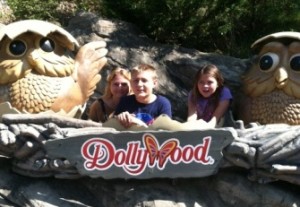 Me and my peeps hanging out at Dollywood- Pigeon Forge, Tennessee.

Riding the rails. This appears to be a theme through many a family vacation. When the kids were young, we took a turn with Thomas the Tank Engine in Eustis, Florida, we braved the wild-west on Tweetsie Railroad in North Carolina, then the more authentic Gulf Coast railway in Parrish, Florida and the Grapevine Railroad to the Stockyards in Fort Worth, Texas. Last year we took a spin on the Great Smoky Mountain Railroad from Bryson City, North Carolina. This summer the historic 1939 Baldwin steam locomotive, the Dollywood Express, beckoned from the Dollywood Theme park in Pigeon Forge, Tennessee. They call the coal-powered beauty who takes visitors on the five mile loop through the park, “Cinderella.” And it was at Dollywood that we conquered rails of a different nature too. 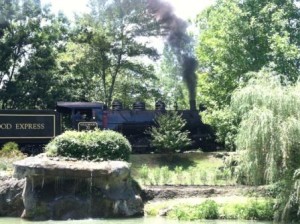 We rode Cinderella, a 1939 Baldwin Steam Locomotive through Dollywood in Pigeon Forge.

The 150 acre Dollywood Theme park, winner of the World’s Friendliest Park award for the past three years, welcomed us on a sunny Tennessee summer’s day. And the rails that filled our sights were not only Cinderella’s, but also the colorful tracks of the roller coasters that dotted the skyline. Last time we were in Pigeon Forge, we had a toddler, a pre-schooler and a nine year old. Luckily, even back then, Dollywood catered to families of all ages and while my husband or I took our nine year old onto the fast rides, the other watched the smaller kids at one of the convenient kiddie play areas – always adjacent to those big-kid thrill rides. But today everyone, a little bit taller and wiser, would be riding the rails (on the ground and in the sky) at Dollywood. 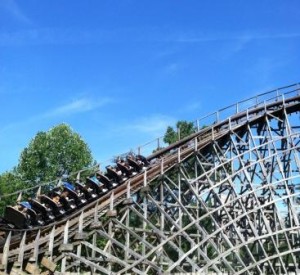 The wooden Thunderhead rollercoaster at Dollywood dominates the skyline.

We began the day on the Thunderhead, Dollywood’s wooden roller coaster. I remembered this one from our previous trip. We had experienced wooden coasters before with the Starliner at the former Cypress Gardens Park in Florida, and this one did not disappoint. You could hear the clack of the cars as we went, much like a train riding the tracks. Afterwards came the Firechaser, a more modern- train themed rollercoaster, albeit smoother. This one shoots backwards to boot! An older favorite, the Tennessee Tornado followed- loops and loops of it, at 70 miles per hour! I confess, after the second one, I closed my eyes like a chicken. We all disembarked, like Dorothy and Toto after battling the whirlwind in Kansas. The retro 1978 indoor Blazing Fury, a fire-in-the hole roller coaster, was more of a trip back through time to the original Silver City amusement park of the area. It was a glimpse into what roller coasters had been, giving us a better appreciation of their metamorphosis.

Spoiler alert: The Firechaser at Dollywood, one of the milder coaster rides (no upside down) switches and goes backwards!

The Wild Eagle was the highlight of the rails in the sky- a soaring bird that took off up and dropped 13 & ½ stories, reaching speeds of 61 miles per hour. The rail cars through Mystery Mine were silent, closed for maintenance. I had taken my step-daughter on that years ago when the thrill ride had opened, and had been unprepared for the upside down loops- she loved it so much we did it twice. Then, riding the rails all the way up, we took the 67 foot waterfall drop down, getting thoroughly soaked on Daredevil Falls. 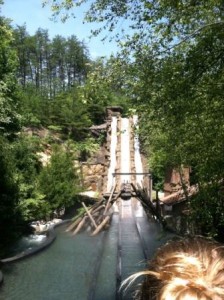 We took the track up, but then faced the falls at Daredevil falls.

Though the lines for riding the steel rails of the roller coasters were relatively short, even for July, Pigeon Forge’s busiest time of the year, (15 to 20 minutes wait time tops), the Dollywood Express Train was packed out.

Using 2 tons of coal a day, the Dollywood steam locomotive leaves the railroad station several times daily (departure times are posted by the station). It took us on the 5 mile ride around the Dollywood Theme Park: out of the Craftsman Valley and through the woods, past pioneer dwellings of the foothills of the Smoky Mountains, and circled back around the amusement rides at the County Fair before returning to the station. This was one more historic train ride that we could mark off our rail-riding list! 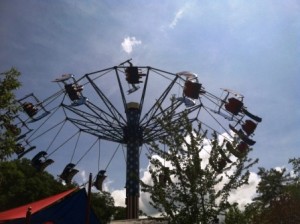 There were many family favorites to try at the County Fair area of Dollywood.

Celebrating its’ 30th Birthday this year, the Dollywood Theme Park has rides for all ages, whether you prefer the more sedate & relaxing historic Dollywood Express, family favorites like the Carousel and Raging Rapids, county fair fun such as the Scrambler and Ferris Wheel, or the intense thrills of the Wild Eagle and Tennessee Tornado. The brand new 307 room Dollywood DreamMore Resort opens its doors this Monday, July 27th offering queen suites to family suites and special park privileges for resort guests. Find out more about the Dollywood DreamMore Resort here. 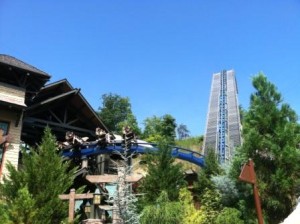 We have lift-off! Soaring in the skies on the Wild Eagle at Dollywood.