Family-Friendly Fun in the Southeast
You are here: Home / Adventures / Paddling the Ichetucknee River in Florida 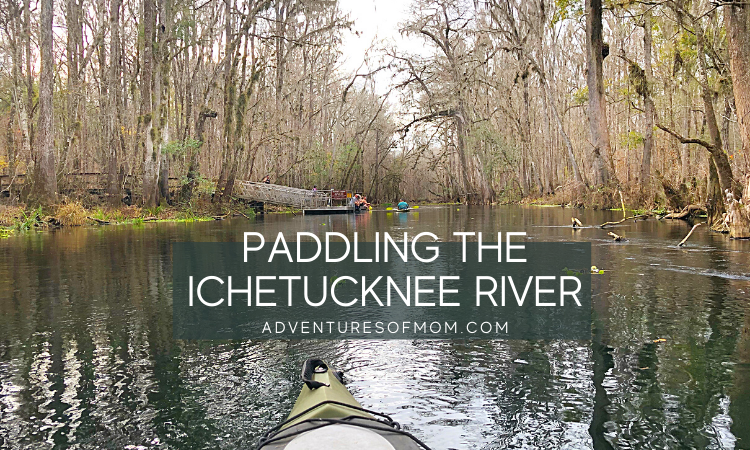 Paddling on the Ichetucknee River, we left the sunny wetlands behind, the river pushed us forward into a dark tunnel of cypress trees. They stretched upwards, so tall they seemed to join each other at their tips, blotting out the winter sky. Bright orange foliage poked between the bleached white trunks. Gnarled stumps jutted from the rich soil. Nature’s art, worn smooth from years of river flooding. Turtles perched on half-submerged logs, stretching their legs out in a ‘plank’ pose. And schools of fish dashed beneath our kayaks, their bodies silvery flashes over the pools of turquoise on the  limestone riverbed. It was us and the river. The only sounds were the swish of our paddles stirring the water and the birds in the trees.

The Perfect Present (Part One)

When our kids asked me what I wanted for Christmas, I told them an outdoor adventure with each of them. This was my gift from our son: A kayak trip at Ichetucknee Springs State Park. 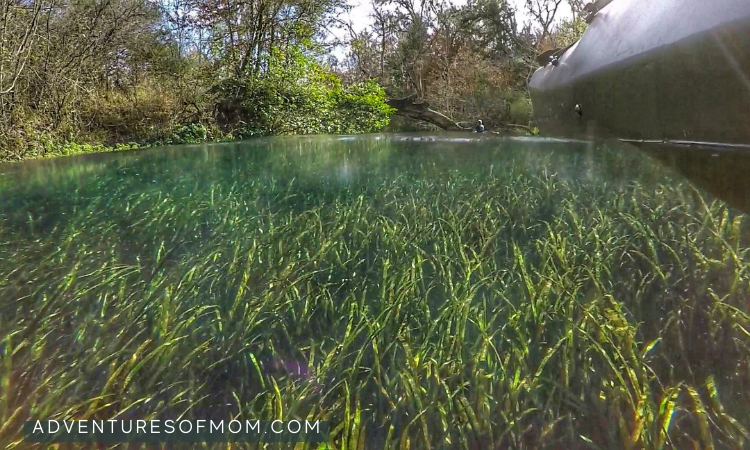 Running through the grass- in a kayak on the Ichetucknee River. Photo by Sally White

My son and I have had several New Year’s Day paddling adventures, so come January 1st, we loaded up our kayaks and drove to Fort White in north Florida. In the past we have visited Ichetucknee Springs State Park, but we never paddled the river.

The  6-mile Ichetucknee River is best known as one of Florida’s cleanest waterways and a Florida Outstanding Water. Ichetucknee Spring was declared a National Natural Landmark in 1972 by the U.S. Department of the Interior. The waterway fills with tubers come summer, taking to the 72F spring-fed river for a day’s float. 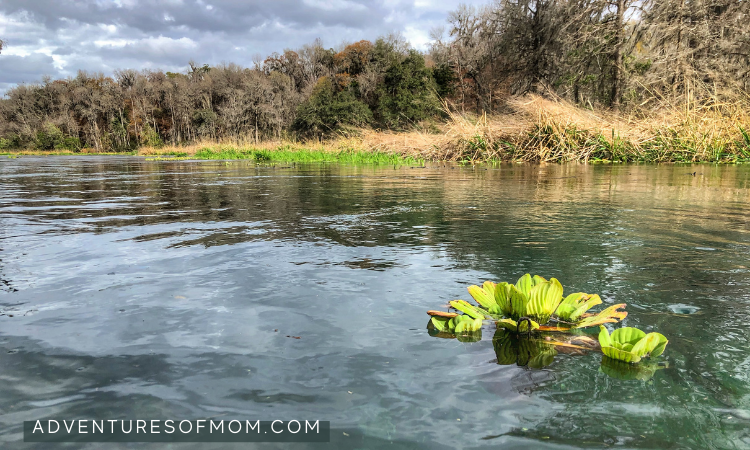 Insider Tips for Your Paddle Launch

Prepping for an Ichetucknee paddle can be confusing because of the 2 park entrances and three takeout points. And then throw in the river tubing season…

Always call ahead to make sure there are no additional changes in open entrances/rules. 386.497.4690 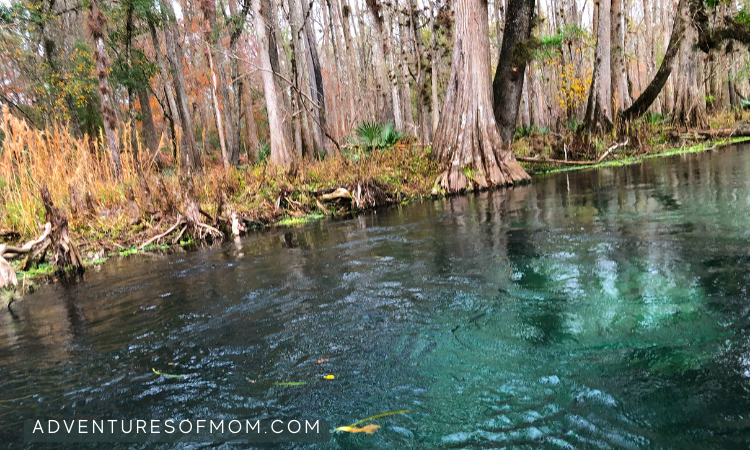 Hidden Springs along the Ichetucknee River. Photo by Sally White.

On the Ichetucknee River

After I parked at the South exit and took the shuttle back (tickets available in the concessions building), I arrived at the North End to my waiting son and husband. It was after one when we launched our kayaks into the shallow run to begin our paddle through the 2,669 acre-state park.

The spring fed river is crystal clear at the north end. We could see the grassy river bed below. The run starts narrow, but it was a busy day, so we had to keep moving to not clog up the waterway by the launch dock with kayaks. Then, ironically, the kayakers around us lagged behind or stopped to take photos and it was just us three and the river.

With a bright sun overhead, we paddled past sunning turtles on logs- one log had over thirty, all vying for a spot of sunshine. Below us, turtles swam through the grasses – (there were seriously a lot of turtles on this river!). Fish darted under the fallen logs and across the exposed limestone beds.

Due to the low water levels, the limestone rock embankments were exposed, revealing crevices and caves. 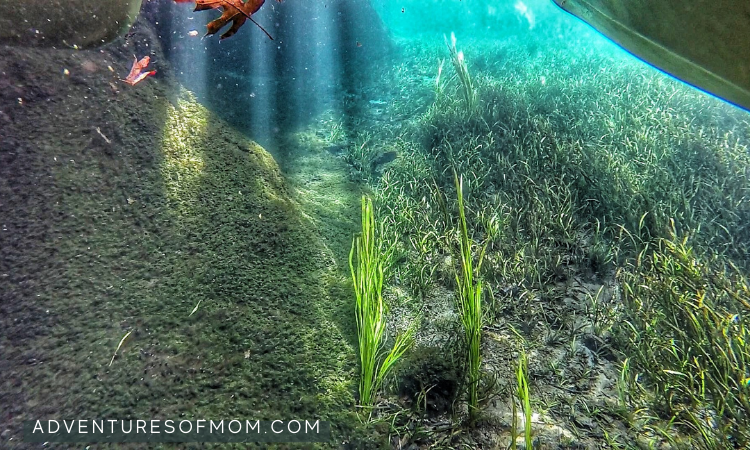 Clear & Clean. The Ichetucknee is one of Florida’s cleanest waterways. Photo by Sally White

Blue Hole on the Ichetucknee

The narrow run widened in places and we could see where the boardwalk trail on the left ridge led to Blue Hole. We hiked there a couple years past with a Tennessee friend. The fresh water Blue Hole is a first magnitude spring and diver’s dream, but the river run paddle access was blocked off from the hole.

The Ichetucknee has 9 named freshwater springs and additional seeps feeding over 200 million gallons of freshwater into the river daily. This river flows into the Santa Fe River, which travels out to the Gulf of Mexico. The paddle trail is a 3-mile one-way trip through the state parks lands. 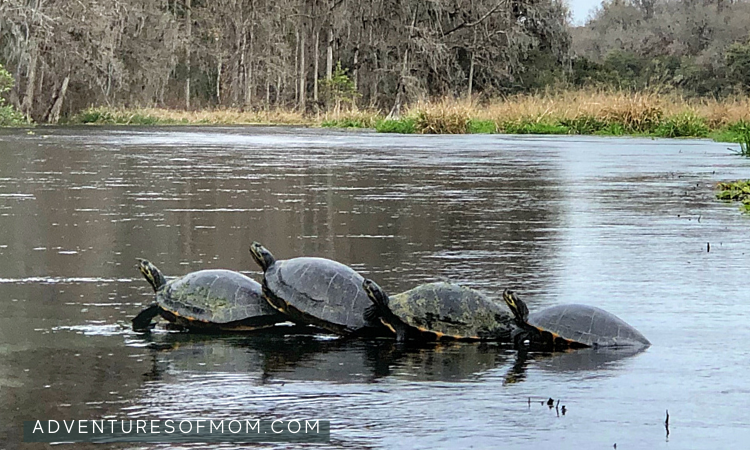 Turtle-time on the Ichetucknee River. Photo by Sally White

We rounded a corner and the river opened up. The bank dropped off in places below us, revealing more freshwater springs. We took a second corner and it became even wider. In Florida, the weather is fickle at anytime of year, and although our day started off bright and sunny, dark clouds moved in above and a fierce wind began to pick up- blowing us across the open waterscape. Despite having the current in our favor, we paddled hard against the onslaught of the wind.

We were, quite literally, in the middle of the wilderness. The other kayakers had vanished completely. All around us, autumn fought spring in the foliage. The orange and reds battled with the bright greens. This was north Florida- and season confusion was rampant in nature. 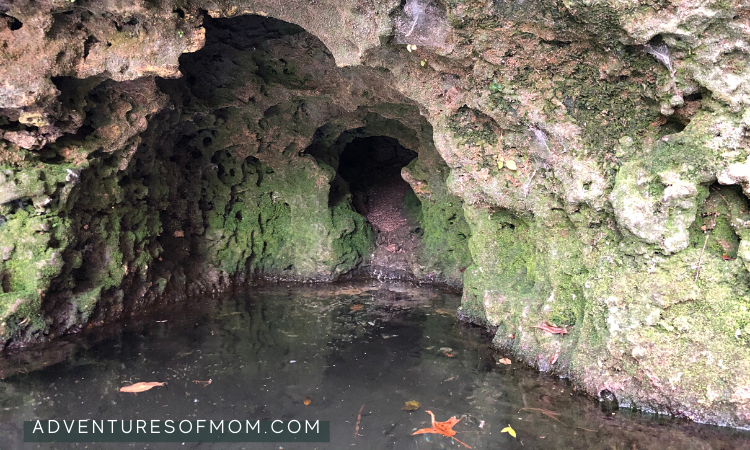 When the water is low, the limestone caves along the Ichetucknee are revealed. Photo by Sally White.

The waterway narrowed again. A massy matt of weeds broke the river in two. My son went one way, my husband the other. I stopped to get a photo of turtles on logs before paddling over to our teen. He was stopped at the mouth of a long channel. There was an official brown park “restoration habitat- keep out” sign at the entrance. In the distance at the end was a cave opening.

“That’s a bear cave!” I said, my imagination running wild with excitement, wishing we could explore more.

My son smiled. He had been thinking the same. Respectful of the park and the fragile environment around us, though, we moved on.

The banks of the Ichetucknee on the left are high- almost like a ridge and here they were set farther back from the river, but we could see where the water during floods had left their mark. 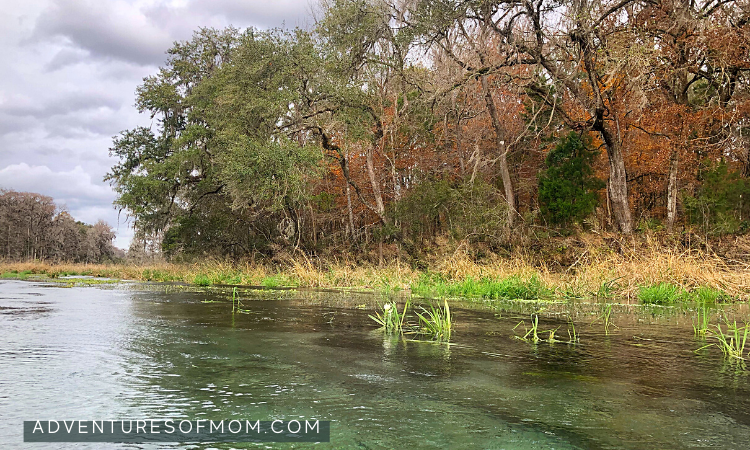 Florida’s Ichetucknee is a landscape photographer’s dream as autumn fights with spring. Photo by Sally White

Entering the Heart of Darkness

The clouds overhead had grown darker, and up ahead the river entered a tunnel of trees. The soft light of day was replaced with a much edgier vibe. Cypress trees on this floodplain forest, lined the river banks, their light bark a stark contrast to the brown and orange fallen leaves on the ground. Gnarled stumps rose from the muddy soil, twisted like gothic pieces of art, but undoubtedly homes to a plethora of swamp critters.

The water beneath us darkened, tannin stained from the fallen leaves and cypress trees, though punctuated with bright spots of light turquoise where the limestone bedrock lay bare around spring vents and fish beds. The air grew heavy- probably due to the imminent storm overhead, or perhaps the trees blocking out the sky.

And then out of the blue, a child’s laughter filled the air, breaking the mood. 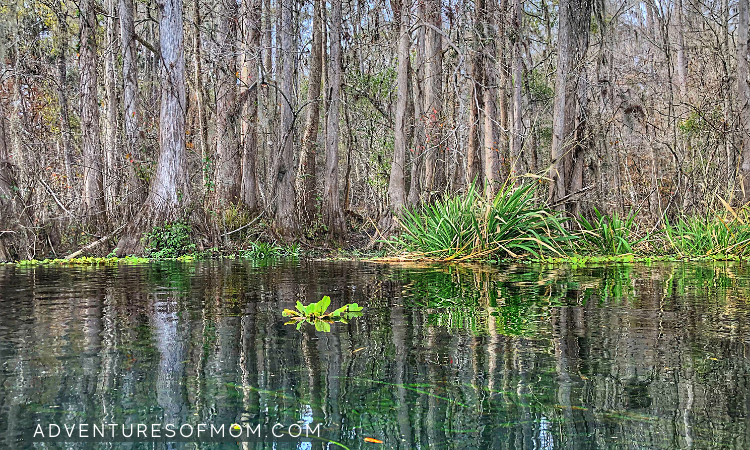 A paddle through paradise on the Ichetucknee River. Photo by Sally White

Mid-Point on the Ichetucknee River Paddle

More shouts and laughter echoed through the woods. Up ahead a metal floating dock came into view. A multi-generational family sat on the dock, enjoy the river and their company- a day out in nature on New Year’s Day. They waved as we floated past. The dock is the 2-mile point on the Ichetucknee Paddle Trail.  Tubers wishing for a shorter trip hop in here from the dock for a 45-minute float to Dampier’s Landing or a further hour on the river to the South takeout. 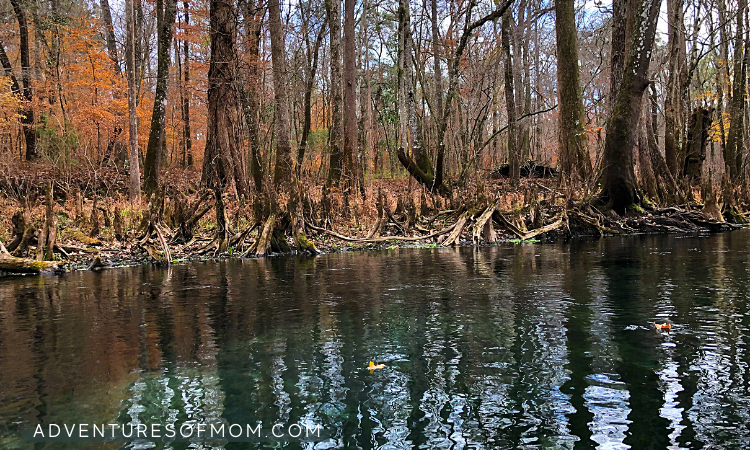 Our last mile went quick- too quick. The river picked up speed as it rushed over a group of fallen logs, sounding like rapids. By the time we reached the fallen tree in the center of the run, we could see the concrete steps and aluminum rails of the Dampier’s Landing takeout point ahead.

We spotted more caves beyond the main takeout and paddled over for an explore. There were signs telling visitors ‘no climbing/diving’ on the rocks. I did note the inordinate amount of cobweb ‘nests’ – cave spiders in the rock crevices. The rain began to fall by then. We could either continue to the last takeout in the park and carry our kayaks on the hike- a little more than half a mile to get back to where we parked our car, or paddle back to Dampier’s Landing.

We paddled back and pulled onto shore. The boys carried our kayaks the a 1/4 mile up a newly paved trail that led us back to  the South Main entrance and our car- letting this mom off the hook 😉 A New Year’s Day paddle and Christmas gift  complete. 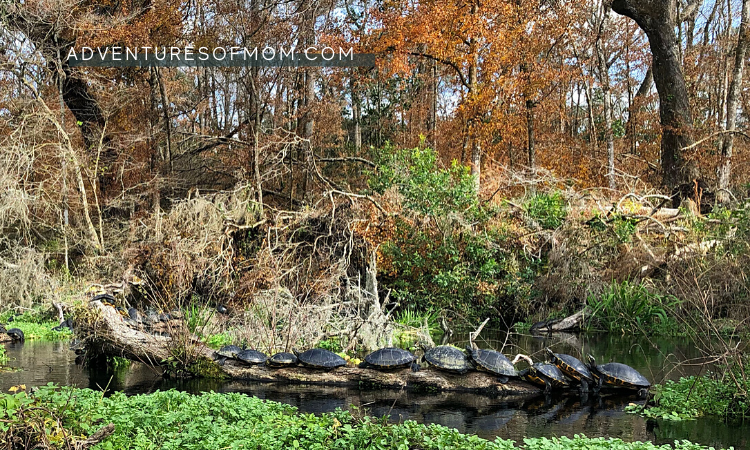 Turtles sunning on a log on the Ichetucknee River. photo by Sally White

Ichetucknee Springs is located at:

Previous Post: « Beneath the Surface: Salt Springs in Florida’s Ocala National Forest
Next Post: Over the Bridge & Through the Woods at O’Leno State Park »