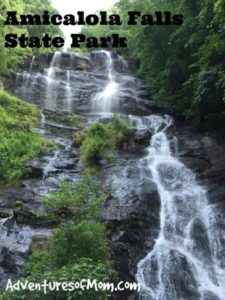 Up or Down: Either Way, You’re Gonna Hurt!

“It’s either 425 steps down or 1100 steps up,” my husband informed me. “Which one?” We were stood at the top of the falls, the air blowing up like an air-conditioner on full blast, a welcome respite from the unnaturally blistering Georgia summer heat. 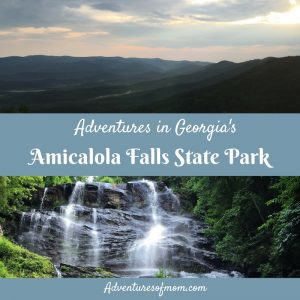 “We could drive to that car park by the falls and walk with no steps,” I suggested this no-brainer, thinking of the heat and the kids and my knees, but my husband seemed not to hear that helpful hint, and we began our descent down the wooden steps to the falls. I blame it on Bill Bryson.

Because of Bill Bryson

What, you ask, would writer Bill Bryson have to do with descending the steps at Amicalola Falls State Park in North Georgia? Years ago I had read a few of Bryson’s autobiographical books: Notes from a Small Island and The Lost Continent, Travels in Small Town America, but it was more recently, two days before our planned vacation, that Bill Bryson changed our lives. One of his more recent books: A Walk in the Woods (Rediscovering America on the Appalachian Trail), was made into a movie last year starring Robert Redford and Nick Nolte. My husband came home from work and one of the kids put on the movie. We watched A Walk in Woods and went to bed late that night.

The next morning my husband rushed us out of the house. We were leaving now! Two days later found us in North Georgia, walking in Bryson’s initial footsteps.

“We should walk the trail,” my husband said, bounding down the steps with the exuberance of a teenager. “We could camp…” I followed more slowly.

Because of Bill Bryson, we ended up at Amicalola Falls State Park in North Georgia, the southern terminus of the Appalachian Trail, a 2,190-mile trail that runs from Springer Mountain in Georgia all the way up the eastern states to Mt. Katahdin in Maine. The 8-mile trail to Springer Mountain Starts at Amicalola Falls State Park, and for a brief moment, I thought I might be writing this post on the back of some leaves on a very long expedition.

We had been to Amicalola Falls State Park when the kids were younger (and we took that 1,100 step trek up too!) They played in the creek that meanders beside the road below the falls and we ate a picnic under the shelter in the rain. But this trip was different. It was as if we were on a mission: motivated by the movie. It was if they were bitten by a bug, but it wasn’t the Zika virus, no this was AT fever.

The beginning of Bryson’s epic AT trail trek (at least in the movie!)

We had to find the arch where Robert Redford in his Bill Bryson character, begins his epic trek in the movie-( hint: it’s behind the state park visitor center), and a whole mile climb up to the top of the falls from there- whew. And then, of course, we had to see the view that fueled it all- to be found on the veranda of the Amicalola Falls Lodge: The surrounding mountains and valley.

“We should watch the sunset here.”

Hmmm. It was very beautiful, and the steam rose from the river snaking through the valley.

“We need to see if the pancakes are good.” That suggestion came from our daughter.

“The guy said they are the best pancakes he ever ate,” she said, referring to Nick Nolte’s comments in the movie (I really thought she hadn’t watched it.)

So we stayed. We watched the sunset and the day-rise and ate the pancakes. And found the way to the Appalachian Trail. And thoroughly enjoyed our time at Amicalola Falls State Park. Because of Bill Bryson. And there was so much more to come on our northern trek. All because of Bill Bryson. 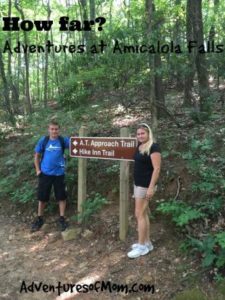 It’s how far to the Appalachian Trail? We were suffering AT fever. 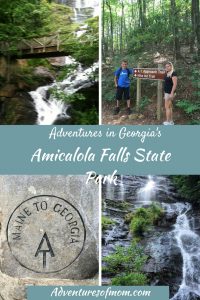 Other stories that may interest you: