Family-Friendly Fun in the Southeast
You are here: Home / Adventures / Monster Encounter in Corfu: A Flashback Friday Tale 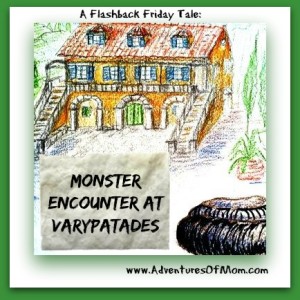 I never expected to run across a prehistoric sized monster on the Greek island of Corfu!

Friday is once again upon us, and after my little mountain climbing story of last week, I seem to be stuck on Greek island tales. My daughter was reading about that famous National Geographic Everglades Photo- you know, the one where the giant python eats the giant alligator whole and they both are found- ugh. What would you do if you were faced with either (or both) of those ginormous beasts in the wild? – Well, that reminded me of my own true monster encounter in the quiet little countryside of Varypatades in central Corfu, a Greek Ionian island. Hope you like this Flashback Friday story:

‘I once knew a family who owned a beautiful Venetian coach house in the Corfiot countryside, somewhere in the mountains near Varypatades. (The village of Varypatades itself was quite a distance from their stately manor home). Together with a group of their friends, they had renovated this house and were in the beginning stages of reclaiming the  overgrown gardens around it. They were creating the perfect retreat (well, in my viewpoint, that was). Unfortunately, I have no photos of this house, but originally , the bottom floor was  used as a stable/barn and the upper floors were the living quarters, but by the time I was blessed enough to tour it, a modern kitchen, dining room and living room occupied the ground level.  My quick sketch certainly does not do this magnificent piece of architecture justice, but I must confess, it was there at that very house where I celebrated my 21st birthday- and a crazy air-guitar concert from the top balcony. So yes, this house gets a soft place in  my heart.

The house stood quite literally on it’s own, the woods and countryside around it had gone wild from centuries of disuse (yes, not just years). I’d been there many times, helped water their vegetable gardens and such, and on one such visit, with my little dog, Max, in tow (he was just a tiny white ball of fluff), I decided to go for a walk, just Max and I, and do a bit of countryside explorations. So I set off from the house, my dog trailing behind me. I followed no trail, just stumbling across one overgrown field to the next, when up ahead in the next clearing I saw what looked like a bunch of giant tires sat in a sunny field. I was in the middle of nowhere- far from the manor house. My first thought was: why would someone leave a bunch of tires in the middle of nowhere? My second: wait- there’s no road near here!

I ventured closer to investigate this mysterious pile of trash. Max had gotten caught up in an investigation of his own, and lagged well behind to sniff out something in the brush. The closer I got to the tires, the more I realized they weren’t tires. It takes a second for your brain to fit together pieces of a puzzle and mine went haywire. I was looking at a snake- the biggest snake I had every seen. It’s body was coiled up,  as thick as a truck tire, piled heavy on top of itself. This prehistoric-sized monster, lazily dozing in the sun,  had probably witnessed the Venetians themselves building that manor house, and lived peacefully, unnoticed in the wild.

Having spent my youth in Florida, I had a healthy respect for snakes, and quietly backed away, so that this magnificent monster would remain undisturbed for yet another century. I could not tell you how long it was, only that it had mounds- yes, mounds of body. And to be that big it would have to eat a bit more then the average mouse- a cow or goat maybe? There were no gators on Corfu, so just what do overgrown ginormous snakes eat? I threw a glance at my bite-sized Max. He would have been a mere appetizer for a beast that size- and I would have made a far tastier entrée!

My heart pounding in my chest at the thought of becoming that snake’s next meal, I quickly retraced my steps to Max, who had luckily not seen the monster, and coxed him away- far away from the monster of Varypatades, and back to the safety of the manor house and civilization.

Final note: That family have long since vacated the lovely manor house in Varyapatades and I no longer know what became of it. It would make a beautiful B&B or farm. And as for the giant monster in the woods, I have not heard of any other sightings there- however a friend in Florida told me of a similar encounter with a monster-sized snake near where I now live. I guess snakes will just keeping growing if they have no predators! So if you find yourself exploring off the beaten track- anywhere- tread carefully, for you may not be alone.

If you liked today’s Flashback Friday Tale, here are a few more suggestions:

Have a great weekend!