I dug this from my archives of adventures B.C. (before children). This is an article of mine that originally ran in The Corfiot magazine, an English-language magazine in Greece: Meeting George: Santorini’s Volcano I peered down into the crater as a puff of yellow smoke issued from a crevice in the rock. An acidic stench stung my nostrils and whipped the breath from my lungs. I stepped back, taking gulps of fresh air, but the burning sensation in my nose persisted. The pungent smell of sulphur clung to my clothes. The taste lingered on my lips, mingling with the salt from the sea air. This was George, Santorini’s volcano, alive and kicking. 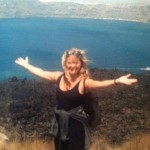 The author standing on Nea Kameni

My sister, Sandy, and I had backpacked the length of Greece, endured  nightmare rides on shuddering ferry boats way past their retirement age, hellish bus rides with drivers practicing for the Grande Prix, all for a glimpse of this volcano, but by the time we reached the surrounding island of Santorini, a glimpse was no longer enough. As a result, I now found myself on the islet of Nea Kameni, my toes touching the rim of the crater named after King George of Greece. I watched as a brave or foolhardy (I could not decide which), French guy clambered down into the pit to photograph the yellow fumes that spewed from the cracks inside the crater. It had taken half an hour to reach George, clambering up lava formations and down through the smaller craters that pitted the islet. I imagined it was like rambling on Mars, or being on earth after a nuclear war- ravaged desolate & dusty wasteland. In the distance, Santorini stretched out in contrast, with its white washed cube buildings clinging to the cliffs like vanilla icing spread sparingly over a chocolate cake. Evidently life existed on the surrounding islands, but Nea Kameni remained desolate. We were alone, save the ominous emissions from our sleeping giant, George. 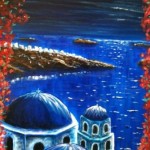 Santorini, with it’s white-washed cube structures, like vanilla icing on a chocolate cake

My sister kneeled down to inspect the yellow specks of color that dusted patches of the ground- sulphur crystals. The islet itself was surrounded by a circle -a warm bright green sea, another evidence of sulphur and the warming of the water. George stirred in his sleep. I checked my watch. We had to begin our trek back to the waiting boat that would carry us back to Santorini. I had no desire to be abandoned on this barren rock with only the big guy and his sour breath for company. 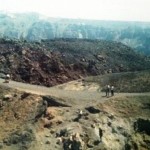 Our little wooden boat pulled out of the tea colored harbor and back towards the port of Mesa Gialos, below Santorini’s capitol town of Fira. From the sea, the sharp black lava rock edges of Nea Kameni jutted out of the water, giving the appearance of an ugly junk pile. An abandoned bicycle or tin cans strewn across the landscape would not have gone amiss. It was not until we were a safe distance away that I wondered when George would flex his muscles again. 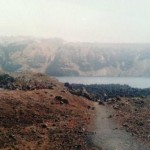 the islet of Nea Kameni in the Caldera of Santorini

Facts: Nea Kameni is uninhabited. The only way to get there is by boat. If you aren’t in possession of one, any of the tourist agents in Fira will gladly sell you a ticket on one of the many daily cruises to the volcano. The tour boats make a stop by the hot springs on their way to the island, where you can swim in the volcanic-warmed sea (but you have to make it through the icy Aegean to get there!) It’s an approximate 30 minute rocky hike to reach George’s crater. Wear closed toed shoes, sunscreen and bring water! 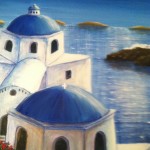 Previous Post: « Raising A FFA Pig for the County Fair
Next Post: Things to do in Fanning Springs, Florida »