Family-Friendly Fun in the Southeast
You are here: Home / Adventures / Marrakesh Express Mystery 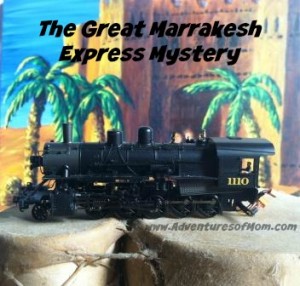 My friend, Lisa and I arrived off the ferry boat from Algeciras, Spain after joining forces with some solo-backpackers. A motley crew we were:  we had an American English language teacher living in Spain who drank wine from a leather bound flask, an Irish backpacker who was covered in scary looking mumps (he thought they were mossie bites from his beach-sleeping stint in Spain, but they looked like a bad case of chicken pox),   a guy who was raised in the Amazon by missionaries, preferred sleeping in hammocks and  carried not much more than his bible, a Californian backpacker who carried a guitar, a Dutch yoga- contortionist and us. We had left our big backpacks in Spain and tucked a change of clothes and a roll of toilet paper in a day pack, thinking we would check out Tangiers, do some girl-shopping and head back to Spain, but the fates were laughing at us. ROFL I would not hesitate to say. The moment we teamed up with our zoo crew, there was no heading back.

We arrived at ten in the evening and a knife-wielding local immediately greeted our group with a toothy grin. “Give me your money,” he said.

A nearby customs officer shouted at him and waved him away. Was this the equivalent of the Aloha greeting in Hawaii with the lei- girls?  We grabbed a beer for a Fourth of July drink and decided heading out of this dodgy port town was our best bet. The train bound for Marrakesh  at the nearby station seemed like our best bet. Lisa and I had Interrail Train tickets, and at the time they included the ferry boat from Spain and the train journey to Marrakesh (they don’t anymore). So being roughty-toughty backpackers, we got our economy class tickets on the Marrakesh Express.

Yeah, the Marrakesh Express was one of the original hippy routes (well before my time), made more popular by the Crosby, Stills and Nash song, but this ten hour overnight train journey was far from fast. Our economy class seats were mere overcrowded benches with dusty windows. Filled with locals and fellow backpackers-( it WAS a free route after all), they locked us in the car to check our tickets as the train shuddered and jolted out of the Tangiers station.

The beer from Tangiers went right through me and I made my way to the toilet after our ticket check (the ticket collectors unlocked the doors afterwards). The toilet was a normal western toilet, but looking down into what should have been water, I could see the railroad tracks passing by- it was a hole straight onto the track! I did my business and quickly left.

An hour later, I had to go again- this would be a common theme throughout our Moroccan adventure. This time I tiptoed through the 1/2 inch of water and clumps of toilet paper that covered the floor. The stench was unbearable. The toilet was overflowing and swamping the aisles! How on earth could a hole to the tracks be stopped up and overflowing? In a single hour at that! How is that even possible? I mark this mystery on par with the Yeti and Lochness Monster. Unexplainable. Baffling. Utterly gross. I vowed to stay clear of the toilet after that- and I wasn’t the only one.

The toilets were clogged and swamping the aisles and the air smelled raw sewage and human sweat.

The train ride was definitely not Canadian VIA, with their airline like stewardess services, or Amtrack with it’s food car. We had water- luckily, and a bottle of wine, of course, but no food. Our last meal had been a hard roll with thin pepperoni slices in an Algicares café, surrounded by dodgy men who kept hissing: “Hashish? ” I dreamed of that hard roll sandwich- turning it in my mind to the best meal I had ever eaten (drug pushers aside). Our Irishman procured a jar of chick peas and brown bread and offered it around, but I think everyone was not quite sure that his mumps weren’t contagious, because we chose starvation instead.

For July, Morocco was freezing at night! Ended up curling up in a ball to try and keep warm (should have brought a sleeping bag!)

The train stopped  around eight the next morning at a large field of tall yellow grass. Everyone got off to stretch their legs, many locals headed into the field to use the toilet- yeah they thought the train toilets were gross too! But I wonder if anyone let the farmer know about the train’s fertilization pit stop?

Eventually we arrived in the great souk town of Marrakesh, stiff and sore but enthusiastic about being in Africa for the first time. With rumbling empty stomachs, parched throats and the great unsolved Marrakesh Express toilet mystery boggling our brains, we headed for the Medina. And that, my friends is a whole other tale!

Have you ever ridden the Marrakesh Express? If so, what was your adventure like?

If you liked this Flashback Friday, let me know and check out my last FF post:

Escaping an Attempted Abduction in Istanbul