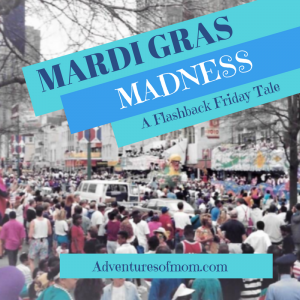 Waiting for a parade on Canal Street in New Orleans.

Years ago I found myself facing a blustery winter in Pittsburgh, then like a ray of hope or prayers answered, my old backpacking friend, Lisa, arrived on my doorstep with a friend in tow. Together we bought a beat-up station wagon and high tailed it out of the snow. We were young, crazy, and on a road trip to Mexico. It was February and Mardi Gras was in full swing in the historic city of New Orleans, in Louisiana,  so as true adventurers do, we headed for the biggest party in America. This is a Flashback Friday Tale: Mardi Gras Madness.

Arriving at the Biggest Party in the United States

Most people plan a year ahead to attend Mardi Gras, the largest street party in the United States, but my friends and I were on a road trip headed to Mexico, it was February and it was on the way. With spontaneous spirits, we hung a left at the Louisiana bayou and headed into the heart of New Orleans. People, cars, madness. We paid for parking on the outskirts of the old city- $10 a day to park in a field, and we hiked into the historic district, where all of the action was happening.

Masses of bodies dancing, drinking, all adorned with strands and strands of colorful beads, crowded the streets of the New Orleans port city. Lacking the neck-bangles that the others flaunted like peacock feathers, we felt underdressed, even with our plastic cups of beer in hand.

“Where do you get beads?”

None of us had ever been to New Orleans before, let alone Mardi Gras. But watching the crazy antics, we soon learned that beads were not sold, but traded, usually to busty ladies for a quick upper body flash. Yeah, well, I was never destined to be a well-endowed lass, so there was no hope for me in that bartering situation.

We continued our bead-less wandering and headed off the pedestrian area towards Jackson Square when a white stretch limo pulled up beside us. (Seriously, I have never been approached by a stretch limo before,  like I said, not well endowed…)  Because of the tinted glass, we couldn’t see inside. Was it a rock star? A movie star? A football star? We had no way of knowing, but then the back passenger window smoothly slid down and a dark arm stretched out with the mother-load of all beads. The mysterious stranger (can’t even remember if he spoke or not, just a manly, hairy arm), deposited the mass of beads into our hands. “Wow, thanks!”  We were dazzled and dazed by the necklaces and before we could get a glimpse of our generous bead donor, up went window and the limo drove off.

We were left standing in the street, gobsmacked. There must have been thousands of strands of glittery beads, from the tiny cheap dollar-store variety to the beautiful giant orbs that would have made fantastic Christmas Tree decorations. We even had a load of “official” Mardi Gras beads (they said ‘Mardi Gras’ on them). From being Mardi Gras paupers, we were suddenly elevated to “King” status (no flashing/bartering required!). We adorned ourselves with our newly acquired treasure (thank you, kind limo-riding stranger!), and headed for the rowdier Bourbon Street, where the bar parties had spilled into the street. 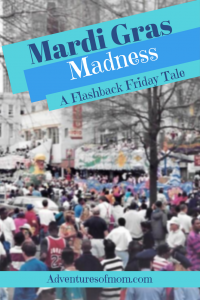 We decided New Orleans was awesome and wanted to stay for the parade the next day. Mardi Gras and New Orleans is not a last minute decision. People book their rooms a year in advance. We had only just arrived on a whim, but have to roll with these spontaneous decisions, and we stay we did, camping in our car in our $10 parking spot location. No one minded. There were so many people sleeping rough on the docks, under the docks, chairs, and coolers set up outside their paid-parking spaces on our field lot like football tailgaters, and many not even sleeping at all. Us three tourists did look amiss, besides, we had our bead treasures by then- we belonged!

The Mardi Gras Parade was the biggest crowd of people I had ever experienced (I had not been to India then!), and the police keeping everyone in line and off the parade route were even in good spirits- it was literally, one giant awesome boozy street party! There were people dancing, people on the bus shelter roofs dancing to the parade music, and giant fantastical floats, where the riders would throw beads at the crowd- no barter necessary.  Bacchus (aka Greek god Dionysus), the god of the grape harvest and wine, was the highly celebrated figure in the Mardi Gras Parade, and I could understand why!

I kept my beads, my Mardi Gras mementos, stumbling across the bag of them in my belongings time after time. Eventually, through the years  I strung some on Christmas trees as decorations, and handed some off to my niece for school projects and passed them on to others for art and adornments. The remainder of them our eldest used to decorate a map of the United States for her  5th grade Social Studies class. Who knew that an impromptu gift from a mysterious stranger could last so many years!

Next week New Orleans celebrates Mardi Gras. Will you make it to the biggest street party of the year?

Other Flashback Friday Tales that May Interest You:

Mystery Aboard the Marrakesh Express

Escaping an Attempted Abduction in Istanbul