Tips & Tricks for Kayaking on the Rainbow River 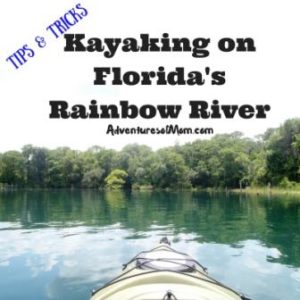 ‘The noise of the busy KP Hole faded into the distance and it was just us and the river, paddling through the wide channels cutting through the marshland.  Anhinga birds perched on overhanging trees to dry their wet feathers in the early morning sun. A cormorant tagged alongside my kayak, before diving deep into the river in search of a fishy breakfast. A trio of otters played and danced in the water ahead of us, shyly ducking into the weeds as we approached. The sandy bottom of the river turned a beautiful blue as the river bed dropped some 20-odd feet down to a cavern spring. We had reached the Devil’s Elbow, the deepest point on the Rainbow River.’

I’ve learned from experience to kayak upriver so that when the family is tuckered out, we can just float back with the current. The Rainbow River is no exception. This 5.6 mile run located in Marion County’s Dunnellon, Florida, begins at the head springs in the Rainbow Springs State Park, meanders through Dunnellon and mixes with the tannin stained dark waters of the Withlacoochee River to head out to Lake Rousseau in Crystal River and eventually to the Gulf of Mexico. With history dating back 10,000 years, the Rainbow River has seen it’s fair share of civilizations, from Native American Indians to Phosphate miners to the tubers of today. A sailor we met in St. Augustine told us  he was surprised about the Rainbow River: unlike other Florida Rivers, there were houses along the banks of the Rainbow, and yet the water managed to maintain it’s crystal clear clarity. This sparkling water is due to the fresh water springs located along the river, adding to the first magnitude springs of the head springs, which shoots out 400-600 million gallons of fresh water daily.

Kayaking on Florida’s Rainbow River can be an hour out or an entire day’s adventure. Here is a run down of the public kayak launch points along the river:

Insider Tip: This boat ramp is extremely busy on weekends. There is over-flow parking at Datesman Park around the corner- 12050 S. Ohio St., Dunnellon, FL 34431

Better known as “City Beach,” this riverside park just off of the road right behind the SunTrust Bank on E. Pennsylvania Ave. From the park you can see both the Withlacoochee River and the Rainbow River. You have to carry your kayak down the hill to reach the water, but this is the end point of the Rainbow before it mixes with the Withlacoochee. Kayak around the island directly across from the beach (many locals swim it) or just head upriver to Blue Run Park. The park is free during off-season (October to May) and $1 per person during season.  City Beach also has toilet facilities, little  kids playground,  and a swim area. City Beach is located at: 12100 Palmetto Court, Dunnellon, FL 34432

Insider Tip: City Beach has the only shallow swim area of all the parks on the Rainbow River, making it a great swimming location for families with younger children.

The official put-in for the lower part of the Rainbow River, this city park is located beside the bridge on 484/E. Pennsylvania Ave. The nice boardwalk and kayak/canoe launch also serves as the tuber exit, so it can get crowded during the warmer months on the weekends. Unload your kayaks and then park up. Kayak downriver to see where the Withlacoochee meets the Rainbow or upriver, past the riverside houses, side swamps and little islands. There is a lake on the left called Blue Cove. It used to be a phosphate pit.  You have to go under a very low bridge to get to it. It’s right after the swamp on the right.  Blue Run Park has porta-potty toilets (2), hiking/biking trails. Swimming is prohibited according to the sign, but lots of people seem to accidentally fall into the crystal clear water. Free. Blue Run Park is located at: 19680 E. Pennsylvania Ave, Dunnellon, FL 34432

Insider Tip: Parking is limited at Blue Run Park, but there is a little known over-flow parking area around the corner at San Jose Boulevard. You can walk back via the road or on the ‘Pond Trail.’

This county park is located only a mile and a half  down river from Rainbow Springs State Park. This is the tubing place on the river, and a 4.5 hour float to Blue Run Park, but upriver is where all of the action is, with Devil’s Elbow, the deepest place on the river with a 22 foot depth, and springs galore. There are nice swimming/snorkeling areas north of the KP Hole too. Kayak upriver to the State Park for a glimpse of wild Florida and float back for a 3 mile run, or all the way back to Blue Run Park. The KP Hole has a shuttle (for an extra fee) that will collect you and your kayak at the end. $5 per person entry fee to the KP Hole (shuttle extra). This county park has toilet facilities, showers, lockers, picnic tables & concessions. Kayak & canoe rentals too! The KP Hole is located at: 9435 SW 190th Avenue Rd, Dunnellon, FL 34432

Insider tip: Pay for one ticket on the shuttle back to the KP Hole, then kayak to the head springs and then downriver to Blue Run Park. Let the car driver return to the park on the shuttle ticket and bring the car back to pick up everyone else. If you get bored, you can always paddle to Swampy’s and grab a bite to eat while you wait for your ride. This, of course, only works if you have two adults in your party. Don’t leave your kids waiting alone!

Hurricane Hermine tossed a tree onto their dock, but they have been working hard at repairs. This kayak launch option is only available to campers at the State Park Campground. The campground is a short kayak run upriver to the state park itself and included in your stay. Kayak to the head springs in the park and float back.   The Rainbow Springs State Park Camp Ground has kayak/canoe rentals, swimming, primitive & RV camping. Fees: $30 campsite. Reservations must be made ahead of time. The facilities in this park are only available to the campers. The campground is located at: 18185 SW 94th St. Dunnellon, FL 34432 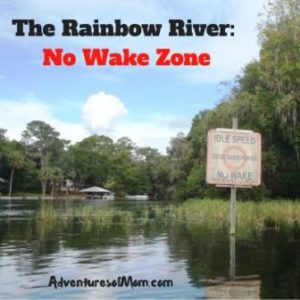 The entire Rainbow River is a No Wake Zone. Bad for motorboats, but great for kayakers!

The Rules of the Rainbow River

The Rainbow River has been an Outstanding Florida Waterway & Aquatic Preserve since 1987, and the locals plan to keep it that way. This is by far one of the strictest rivers we’ve kayaked. 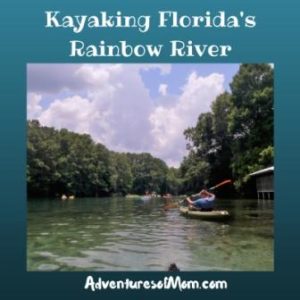 Make kayaking a family adventure on the Rainbow River in Marion County, Florida

Places to Eat Along the Rainbow River

Places to Stay in Dunnellon