Family-Friendly Fun in the Southeast
You are here: Home / Adventures / Hunting for Manatees on Florida’s Nature Coast

It’s hunting season again, the time when families part and the more camo-orientated head out into the wild to bag some winter meat, usually deer. With that nippy chill in the Florida air, and newly arrived friends from England, we decided to grab the kids and go hunting ourselves, without the camouflage and weapons. So while others headed out to bag their winter venison, out we went, armed with cameras, hunting  for manatees, the cows of the sea. 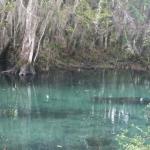 Before anyone gets too upset, manatees are a Florida endangered species and hunting them with anything but a camera is illegal- and if you get too close to one with that camera or happen to separate mama manatee from it’s calf, that’s illegal too. 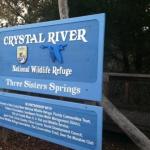 This time of year when the water temperatures drop, the manatees, typical Florida natives, get cold and head into the springs around the west coast of Florida, where the water bubbling up from the sandy beds average a nice 72F (year round). I googled the best manatee spotting area and came up with the Three Sister’s Springs     (Crystal River National Wildlife Refuge)- I rounded the troops up to give it a try, figuring that if all else failed, we could nip into Homosassa Springs State Park, where the manatees are kept year round. Luckily, our walk on the wild side was rewarded. 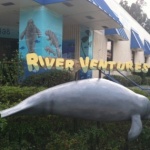 After a bit of frustration trying to get to the park, we discovered that the only way into the Three Sister’s Springs is either to snorkel it from your boat moored in the channels or through River Ventures in Crystal River. ($6 per adult, $4 per child). Not wanting the swim- or having a boat on us either, we parked up at the swim-with- manatee- place and took the shuttle over and through the locked-gate park.

Boardwalks built over and around the springs give ample viewing- and the manatees poured into this natural swimming hole area – the place was as packed as a hotel in Daytona during the NASCAR 500. There was no possible way we could not see a manatee- or twenty as was the case. There were park rangers on hand to answer any questions about the sea giants and to make sure we stayed on the boardwalk. 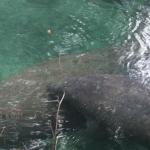 Though I was skeptical at first to hand over cash to see manatees that friends told us we could stop at a bridge to see, it was worth it to see them that up close. Next time a swim perhaps? Though the manatees may find the 72F spring warm, to the rest of us thin-blooded critters, that is downright too cold!

Oh and for the curious, according to the park ranger, the native Indians of that area DID used to eat the manatees, but they are extremely fatty. 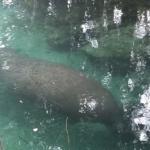 Manatee viewing season only lasts a short time, once the temperatures rise come early spring, the manatees head on out  so if you are thinking of checking them out, do so now!

1. This is a short excursion (1 hour)- so you can head elsewhere afterwards (we went out to Fort Island Beach). Homosassa Springs State Park is always a good idea too!

2. You can swim with the manatees with the River Ventures company as well (snorkels and wet suits provided) for an additional fee.

3. If you have a kayak you can enter the springs by water- but you can not get out of your kayak. And when it’s packed with manatees, they close the waterway to all traffic.

5. Charlie’s Fish House and Crackers are great places to warm up with some seafood afterwards. Both are on Kings Bay in Crystal River.

6. All manatee photos above were taken from the safety of the boardwalk, so if I can take some really great pics- so can you! Bring a camera!

Previous Post: « Pumpkin Picking at your Family Farm
Next Post: Early Christmas Present- Falling for Her Captor by Elisabeth Hobbes »