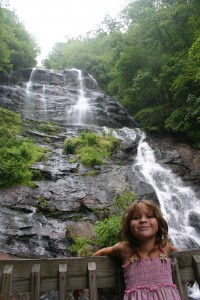 Adventures in the Georgia Mountains

How do you make a 3 day trip to Georgia seem like the Best Vacation Ever? Head to North Georgia and let loose!

Our original family vacation plan was to hunt for gold in Dahlonega, Georgia, but the mountain air went straight to our heads and things didn’t quite go as planned.

Hunting for Gold in North Georgia

The Gold Museum in the town square of Dahlonega was closed by the time we arrived. I had read about the Smith House, a local restaurant, having a gold mine inside of it as well, but we were out of luck, as that was closed as well.

In the end, we took a tour of the Consolidated Gold Mine in Dahlonega–which ironically happens to be under a super Walmart (hmmm). I’m sure that is the brunt of many jokes, but Consolidated Gold Mine was home to the biggest gold deposit find in the East. Gold was found in quartz vein, which they showed us on the mine tour. We all kept our eyes out for the sparkly stuff, but I think they found it all already!

However, after learning to pan for gold after the tour,  we did indeed come away with gold- gold flakes, that is, which they kindly gave to us to keep in little plastic vials. Hmm… how many flakes would it take to make a ring? 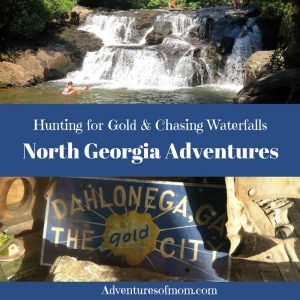 How to Find Out Where the Best Places Are Located

We started our morning in Dahlonega with breakfast at Danny’s (yes, Danny’s, not Denny’s- awesome biscuits & gravy) and a chat with the waitress took us over to Amicalola Falls State Park and the end or beginning (depending which way you look at it) of the Appalachian Trail.

Trails and stairs- and more stairs…We walked up to the top of the falls- all 1100 steps (for the less energetic or those wanting to save your knees) you can drive. We sweated but rewarded ourselves by playing in the icy cold mountain stream above the falls…There is a lodge at the top of the mountain if you want to experience overnight in Amicalola Falls State Park, or just to take a luxurious rest before heading off on the Appalachian Trail.

We explored the lodge, took a much-needed bathroom break and then with wobbly legs, we descended those stairs again.

The kids were rewarded with a splash in the stream below- they followed the icy water as it tripped over the rocks- all up until this mama bear spotted a Copperhead Snake sunning on a streamside stone. (Yes, folks- always be aware!). I hustled the kids from the stream and we watched, mouths agape as the snake slid off the rock and into the water, disappearing in the rocks.

I still get goosebumps from that, but we were in the wild, and that’s what you come across in the wild- er, wild things!

On the Road Again

From Amicalola (passing a Kangaroo Reserve as well), we headed back to Dahlonega with thoughts of a cool swim and a river tube adventure when someone told us about the coolest river tubing adventure an hour’s drive away in Helen, GA. 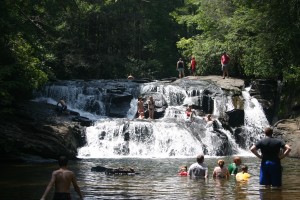 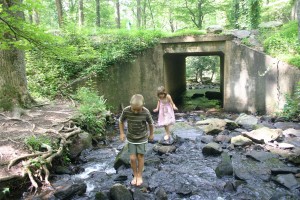 Waylaid by a Swimming Hole

On the drive to Helen, we stopped by a little country store to have a pee break and grab a soda. While I stood in line, waiting to pay, the couple ahead of me were asking the cashier for directions to a nearby swimming hole. Of course, I unabashedly evesdropped. A mountain swimming hole!

Loading back in the car, I told dear husband about the swimming hole and we decided to find it for ourselves- making the turn up into the mountains at the WMA signpost. We drove what seemed like forever, the road growing narrower and narrower until finally the pavement stopped and it was a dirt track.

The track opened up into a little parking area. 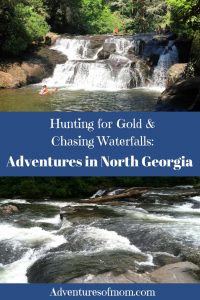 Finding the waterfall in the middle of the forest was like stumbling upon a secret Shangri-la. Teenagers jumped off a rock into a natural plunge pool at the top of the falls. Other kids clambered over the rocks of the second and largest of the falls, some of the kids would just walk the top of the falls and submerge completely in holes. It was crazy.

Adults hung around the pools below the falls, their beach chairs set in the water, watching the younger kids. This was obviously the local hangout.

Clambering over the slippery rocks, we all ended up in the water, whether it was intended or not. But the water was cool and refreshing on this hot summer’s day, and the secret swimming hole made a neat break in the day, on our journey to Helen.

Note: Even though we tried, we couldn’t find that waterfall again until years later. We found out it was called Dick’s Creek Falls. It’s a neat place. If you find it, follow it downstream a bit to see some neat rock formations and smaller falls. If you take the road past the parking area, there are places for camping throughout the mountainside, but the Creekside ones look the best.

In Search of the Edge of the World

Previous Post: « Across Europe by Motorbike
Next Post: Whitewater Rafting with Kids (Who Knew!) and Other Adventures »