Family-Friendly Fun in the Southeast
You are here: Home / Daily Life / Connecting With Your Kids / How to Host The Ultimate Pirate Themed Week for Kids

How to Host a Pirate Week for Kids 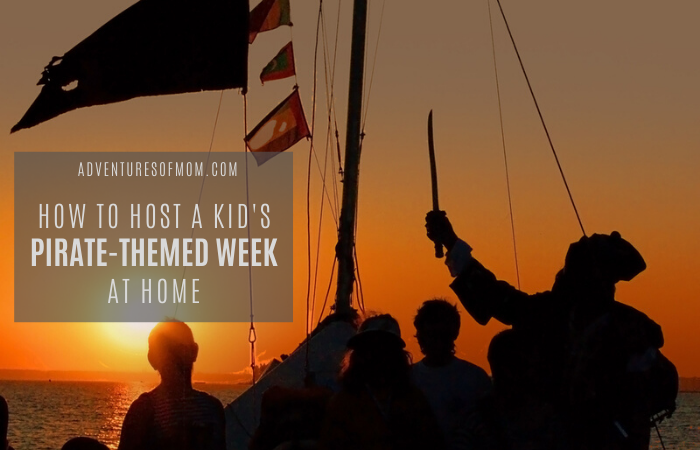 How do you pass time with kids? Grab your (plastic) sword, don an eye patch and host a pirate week!

We’ve spent many summer & school breaks home-bound. Whether it was due to work commitments, lack of finances or bad weather, spending extended periods of time at home with the kids is not foreign territory. One way I got through the time when the kids were younger was to host themed weeks. They usually centered around an outing at the end. Summer camps and science camps do the same thing, but hosting one on our own means you don’t have to follow the strict guidelines imposed by others.  We’ve done Dinosaur Week with a trip to Dinosaur World as the grand finale; Royal Week with a daily reading of the Tale of Despereaux and the kids’ most favorite: Pirate Week.

Pirate Week is five days worth of activities centered around the theme of pirates.

Believe it or not, you can teach your kids while they are having fun, and who doesn’t love some swashbuckling adventure? In addition to adventure, you will be adding history, art, map-making skills, language, math and reading- the key is to not them know you are doing this, otherwise it’s mutiny on the high seas! 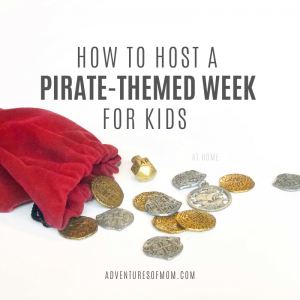 Read a Book A Day

Read a pirate-themed story a day. This is not the usual bedtime story time, instead you are breaking up your day with a story session. If you can visit your library for the selections, order them ahead or have them ready for a true hunker-down. You can also check out books online (hello, Kindle!)

Tip: If you want to stretch the pirate theme out further- read a picture book in the daytime and a couple of chapters from one of the longer chapter books at bedtime

Here are a selection of kid’s pirate books to choose from:

These longer chapter books can be tackled a few chapters a day:

If you can make a trip to the library- these are great materials to supplement with your daily activity. Explore them with your kids. Discuss daily life on a ship. Talk about the difference between real pirates (they were actually bad guys) and the Hollywood version of pirates.

Everyone needs some downtime, and chilling with a good movie is great (especially when the weather is bad outside). Make some popcorn. Mix up some kid-friendly pirate grog*. And watch one movie. Treat it like a movie-theater experience (minus the kid behind you kicking the seat 😉

Tip: Pirate Grog. Pirates loved their grog! Grog was a combination of rum and lime juice (the lime was to prevent scurvy among seafarers)- Make some homemade lemonade (without the rum!) and serve by the pint for kid-friendly grog.

September 19th is International Talk-Like-A-Pirate Day, but you can pepper your own Pirate Week by adding some pirate-talk. Start the morning by greeting your kids with ‘Ahoy, matey’, and dishing them up some ‘cackle fruit’ (eggs) for breakfast.

Here’s some Pirate Lingo to get you on your way: 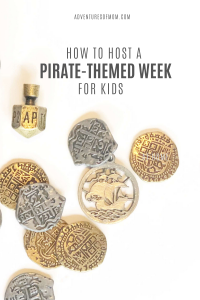 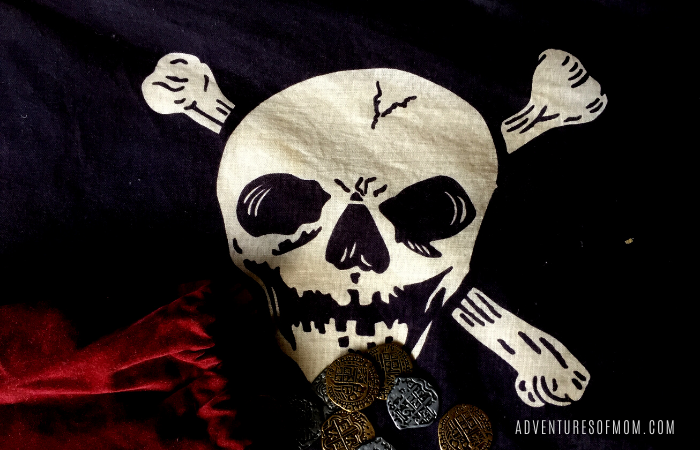 Not all pirates flew the skull and cross bones flag (aka the Jolly Roger).  Calico Jack’s flag had crossed swords beneath a skull. Some pirate flags were even red.

Create a pirate flag. Have your child draw their flag on the paper. Do a google search for pirate flag images for ideas or use the books you have on hand for reference. Color it in and decorate.

All pirates need to learn to hunt for treasure (er, booty?) and a scavenger hunt gets your kids up and active. Make a list of items to find- provide them with a bag/basket to put the items in as they go, and a pencil/crayon to check the items off from their list. 10 things for young kids; 15-20 for older kids. Provide them with a treat for a completed hunt – like an ice pop. If you have more than one child, make it a competition with a prize, like winner gets a free pass from doing dishes.

Scavenger List Ideas (write them down on a piece of paper for each child.) 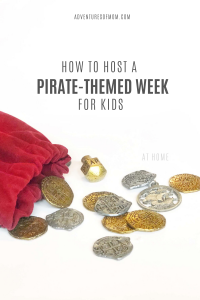 Inside Hunt- use variations of this with color and numbers:

For older kids you may want to add:

Tip: For kids with phones- try a picture scavenger hunt, where they must get photos of items. You can include things like: something blue, a butterfly, yellow flowers, a caterpillar, a winged insect, a lizard. Get creative.

Print out these word searches for activity time:

For younger kids, find the items a pirate might need in daily life in this word search

For older kids, locate the pirates from history in this word search

It’s art time! Every pirate needs a treasure map and it’s time to create yours.

Have your child draw your yard. If you live in an apartment, have them draw that area. Start with the perimeter fence/property line/building walls around the edge of the paper and work in from there. Kids don’t see things the way adults do, so don’t be surprised if the dog kennel outside is bigger than your house.  Mark each area- like house, rose bush, oak tree, swing set, and let them color it in as they like. While your child is making their map- make one as well yourself- you will be using it for the treasure hunt on day 5. 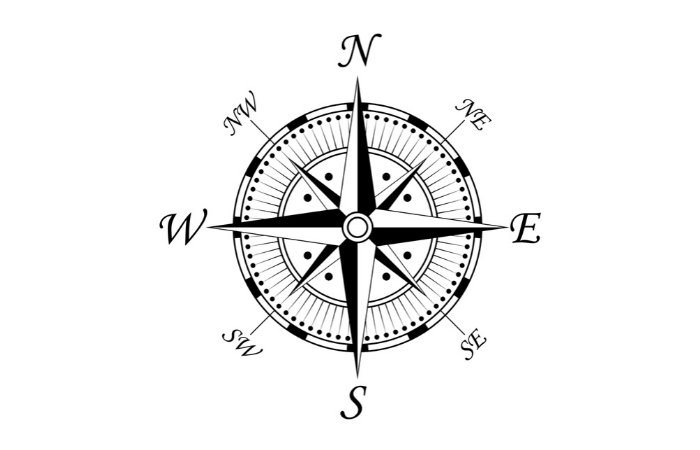 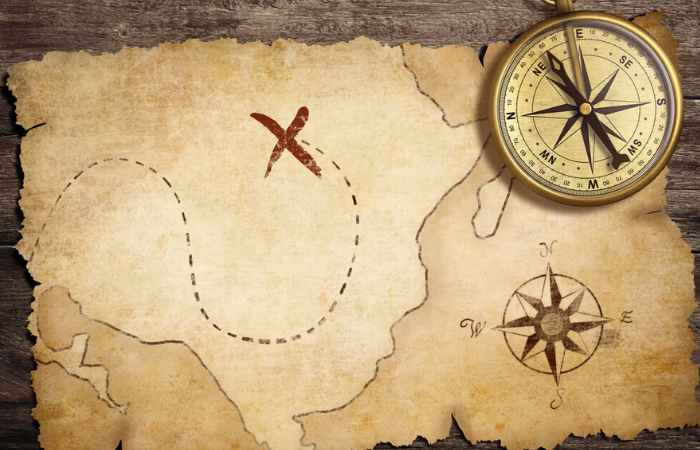 Hold a treasure hunt in your backyard to wrap up Pirate Week.Hold a Treasure Hunt– Day 5 Activity

This is the final day of your Pirate-themed week, and you need to plan ahead to make it a good one. Today you will be holding a treasure hunt. Make sure you set up this hunt before letting the kids on it- (you may even have to prep it the night before). Also, be sure to have a prize per child for the end of the hunt. This could be as simple as a hand-made coupon good for an ice-pop/ice cream treat; a toy compass/spyglass from the Dollar Store (look in the party section); candy, a Steam card- you know your kids best 😉

There are 2 ways you can do your treasure hunt:

Hand your child the map from day 3 with an x-marks the spot over the location where you left your first clue. In that location, have a piece of paper with your clue written -it can be a riddle, a poem or even a puzzle. It should lead them to the next spot where the next clue is hidden, and so on, until you have left a total of 3 clues. The 4th clue should lead them to the spot where the ‘treasure’ is waiting.   Do you geocache? You can use GPS coordinates to hide the clues, with another set of coordinates to the next spot and let your kids use a GPS to find them. 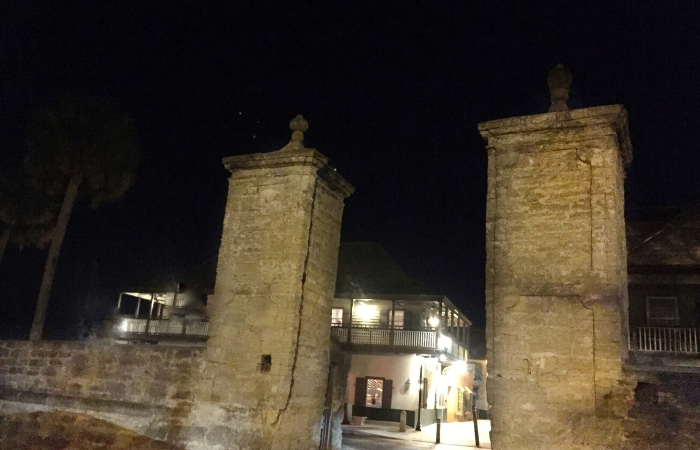 The city of St. Augustine was ransacked by pirates Sir Francis Drake in 1586 and Robert Searles in 1688

So, you’ve made it through a whole pirate themed week and your kids still love the subject. Consider extending the week with a field trip to learn more about the buccaneers and privateers that roamed the seas. (*When travel restrictions have been lifted).

The Pirate & Treasure Museum in  historic St. Augustine is stuffed to the gunnels with pirate facts and lore.  Learn about the St. Augustine pirate raids by Sir Francis Drake and Robert Searle, how life was on a pirate ship and what it was like in battle. There are also displays of real pirate treasures and a nod to Hollywood fiction.

A wander through the old cobblestone streets of Charleston is like stepping back in time.  Visit Provost Dungeon beneath the Old Exchange where pirate, Stede Bonnet was imprisoned for his crimes. He escaped but was recaptured and ultimately hanged at White Point Gardens, along with 48 other pirates during the 1718 mass pirate executions in Charleston.

Edward Teach, aka Blackbeard, used to take his R&R in Savannah, Georgia. The Pirate’s House Restaurant is said to have a tunnel that leads to the sea- where drunk men were kidnapped to serve on ships. It’s this house, dating back to 1753, that inspired scenes in Robert Louis Stevenson’s Treasure Island.

The 5.6k acre Blackbeard’s Island,   a barrier island on the Atlantic was once an R&R spot for the swarthy Blackbeard and the Queen Anne’s Revenge. Now this national wildlife refuge is a haven for birds and other critters and only accessible by boat.

Other Posts You May Enjoy:

Previous Post: « The Top 10 Most Useful Things We Ever Did As Parents
Next Post: Snakes, Gators & Lost Pirate Treasure: Adventures in the Lower Suwannee National Wildlife Refuge »