Family-Friendly Fun in the Southeast
You are here: Home / Adventures / Over the Bridge & Through the Woods at O’Leno State Park 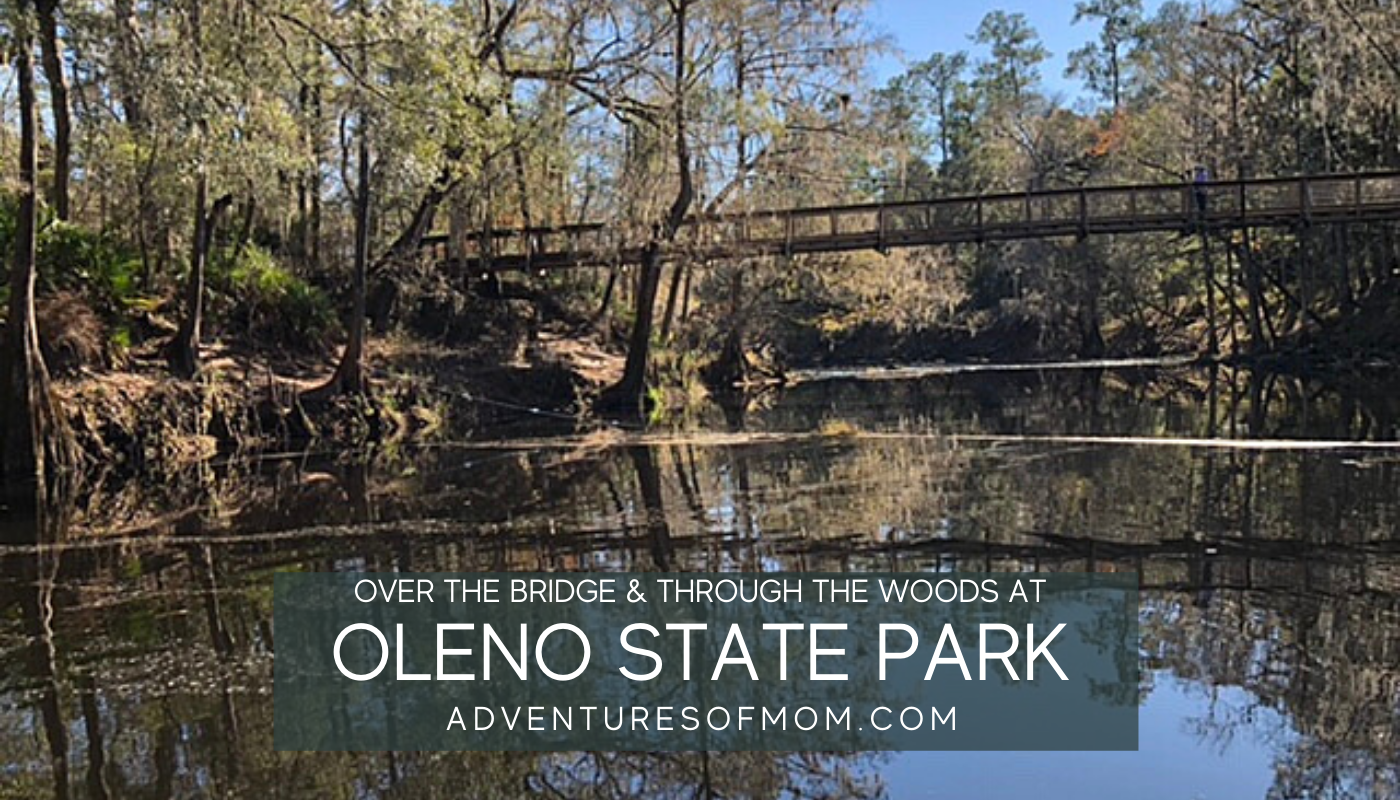 What the heck? I stopped mid-step on the footpath and my daughter crashed into me from behind with an annoyed “Mom!”

In front of us a bleached skeleton stretch out over a moss covered log. “What animal is it?” I asked. “And what ate it?” Instinctively I looked to the stand of palmettoes on the hillside  that ran alongside the trail, as if expecting a bear to come crashing out of the greenery and slide down to the hill to chase us. Up ahead the path turned mussy, leading to a swampy cove. Perhaps a alligator had emerged from the dark waters to feast on prey. Maybe a panther slunk in from the trees on the left, looking for a meal?

My daughter and I were hiking along the river at O’Leno State Park in High Springs, Florida.

We had visited High Springs several times over the years. It’s the ultimate spring destination. We swam the waters of Gilchrist Blue, paddled the Santa Fe, explored the more secluded Poe and spring-hopped at Ginnie Springs, but O’Leno seemed sedate next to the glittery siren allure of the turquoise freshwater springs. Then one day, we decided to take a walk in the woods… 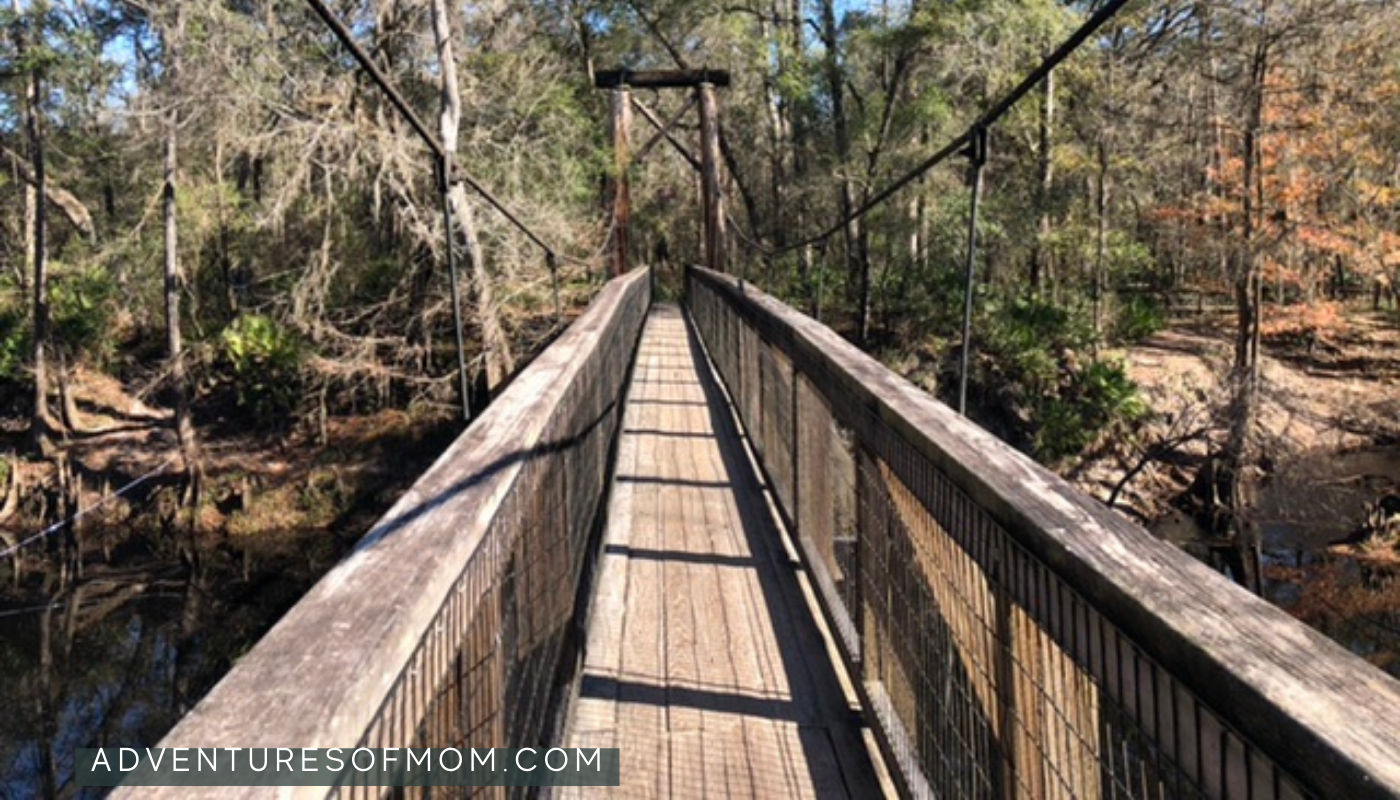 One of Florida’s oldest parks, built on the land of the former 1800’s town of Leno. The introduction of the railway was the demise of the river-town, and in 1935 the Florida Forest Service purchased the land. Later that year the Civilian Conservation Corps was brought in to build, and clear. The stone cabins and bridge over the river still remain.

I confess, I did not have high hopes for O’Leno, as we pulled up in the parking lot. The stone & wood CCC cabins dotted the landscape. Then we took the trail, and the landscape dropped away. My jaw dropped. A swinging bridge stretched out over the curve of a river in a valley below. It didn’t even look like Florida.

The water was dark, but the day was bright and the sky above a brilliant blue, which mirrored across the water. There was a swimming area below- but the water did not look so swimmingly nice- perhaps it would clear with the summer? Or would it always remain a tannin-stained color? 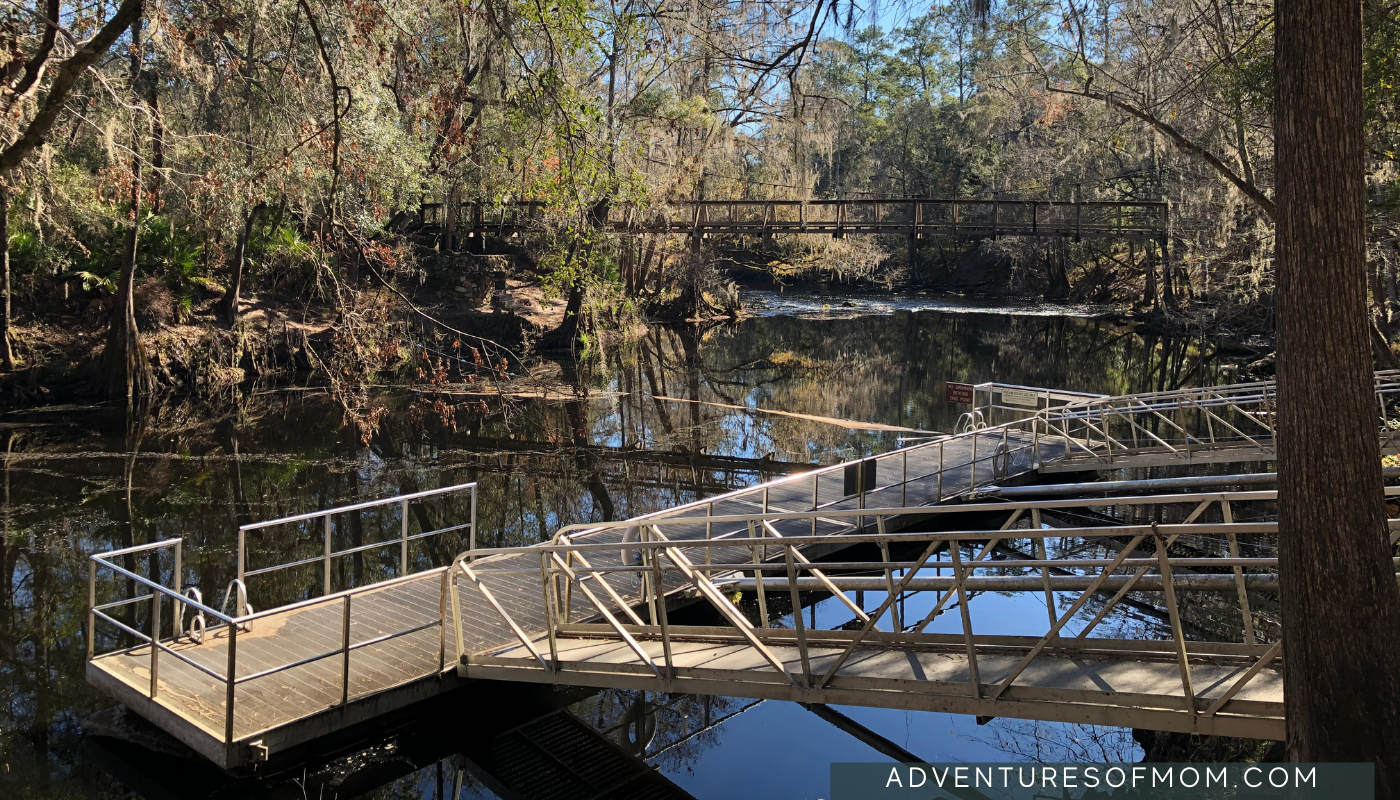 Over the River and Through the Woods

We took our time crossing the bridge. On the other side, stone steps wind down to the rivers edge, where the water cascaded over protruding rocks. To the left a sign read: River Trail. That seemed like the perfect place to start.

The River Trail is a well worn 1.4 mile trail that follows the river from an embankment above. It winds, and climbs up through palmettoes and turkey oaks. Boardwalks span the  dips and valleys in the landscape, thick with mud and  wild boar and deer tracks. In the wetter months, these areas can become swamplands, but during our visit, we were able to see the open landscapes.

It’s not a Houdini trick- the Santa Fe River ends  by the River Trail and re-emerges 3-miles away at River Rise State Park. When I first heard about this, I imagined a cool tunnel with a waterfall- perhaps big enough to fit a person and kayak – yeah- just dreaming. The reality was much- er greener. 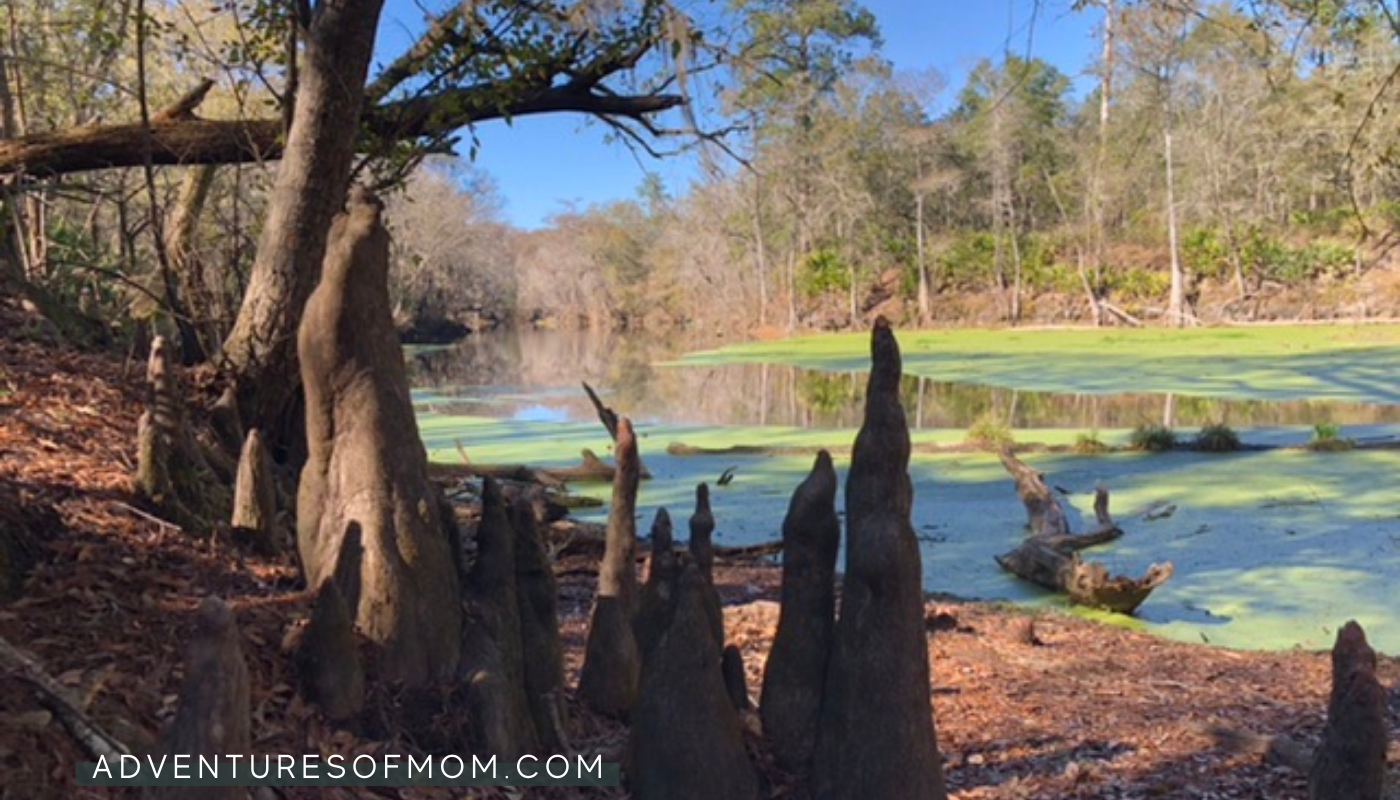 End of the Line: The Santa Fe River disappears underground here before reemerging 3-miles away.

The river ends in an algae covered lagoon. That’s it. No waterfall or secret tunnel-well, not to the naked eye.

When it was discovered that more water came out at River Rise than went in at O’Leno, an official study was done on the disappearing river revealing an extensive cave system. This was all legit and permitted with the state & the Department of Environmental Protection- as all diving is strictly prohibited at these state parks and if you read their report- extremely dangerous.

The lagoon that day was green- bright green. I imagine there were a gator or two watching from the grasses. Turtles perched on logs to sun themselves and cypress knees protruded from the thick dark soil like little woodland gnomes. 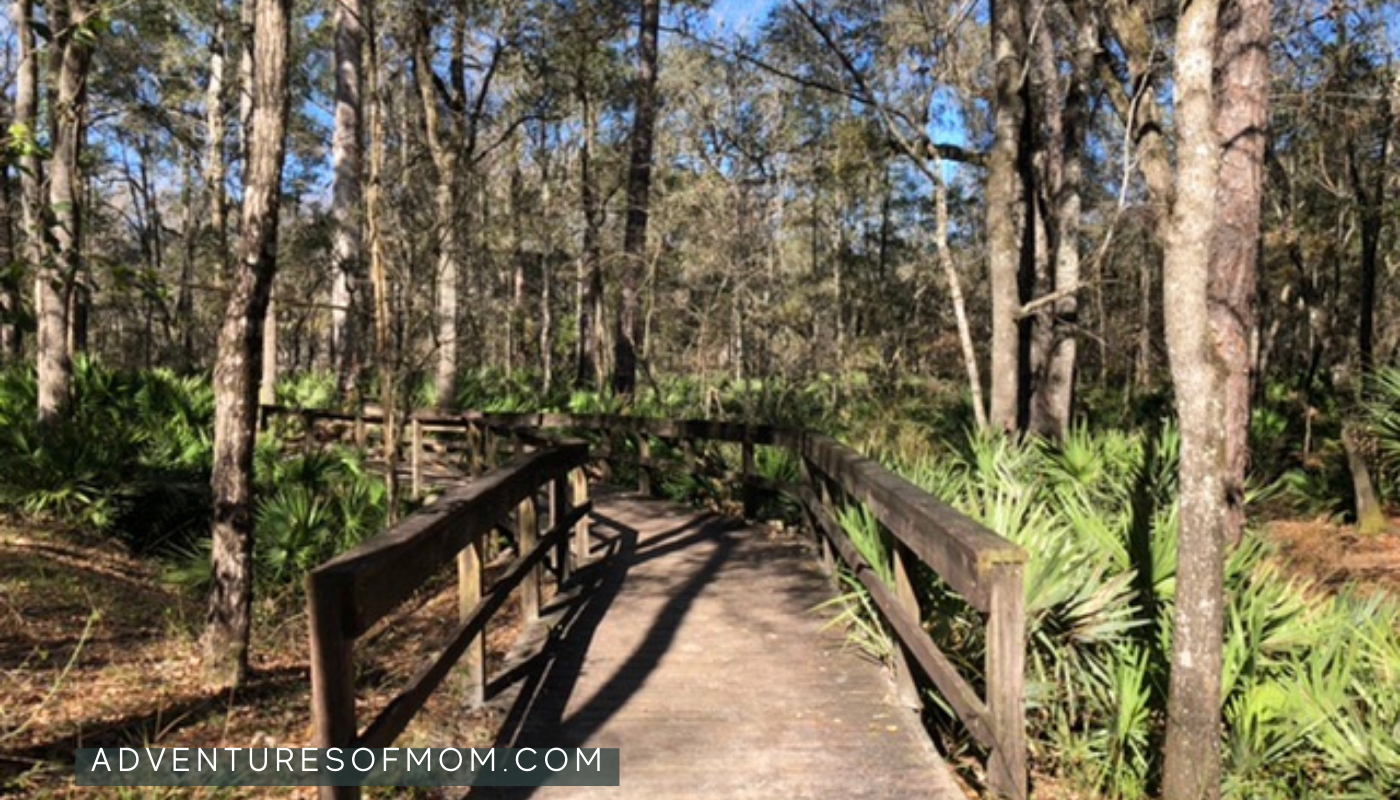 The sun filtered through the canopy above and soon we heard voices- the first of our hike. On a overlook, an elderly man was teaching his grandson how to cast a line. Fishing is allowed in O’Leno State Park- with a license, and there are a few places along the trail and down by the river to cast your line, should you be inclined.

We by-passed the fishing lesson and found our own way down steps to the river. Perched on a log, we stared at the water- rushing, rushing to nowhere

We made our way full circle back to the CCC cabins, pausing to watch the rapids by the bridge. Because the river disappeared, the trail made a loop, following it the whole way, and landing us on the side of the bridge where we had started. 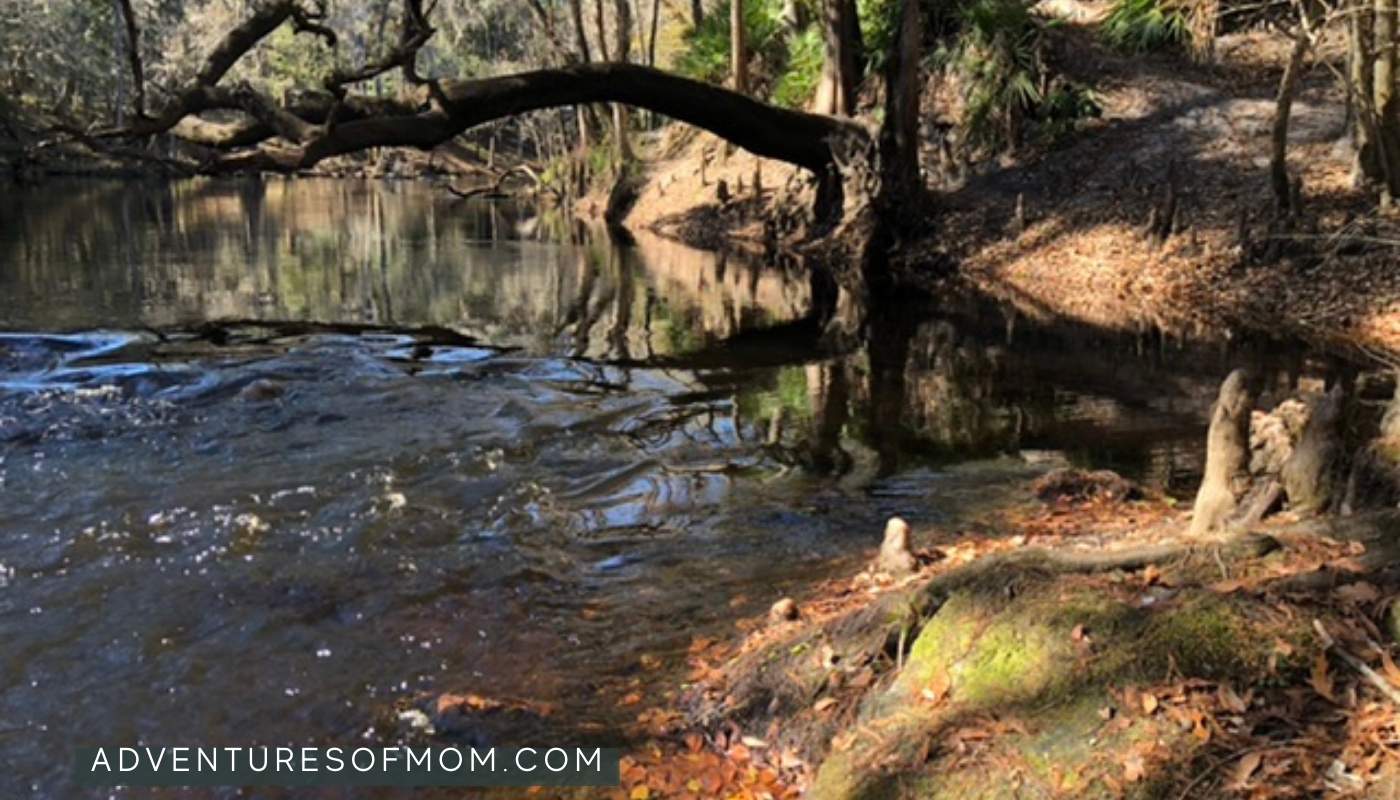 Off the Beaten Path

We crossed back over to check out the trail to the right that ran by the water. Again, dry season was on our side, but the size of the cypress knees was a giveaway that this was not always the case. We followed the river bank until the land rose high, covered thick with palmettoes. The trail curved inland to follow a valley.

This was not an official trail- probably more of a fishing spot finder. Unlike the River Trail, this was less trodden and more narrow. Come wet season it would be swamp.

We ducked under a tree and then I saw it – the skeleton. 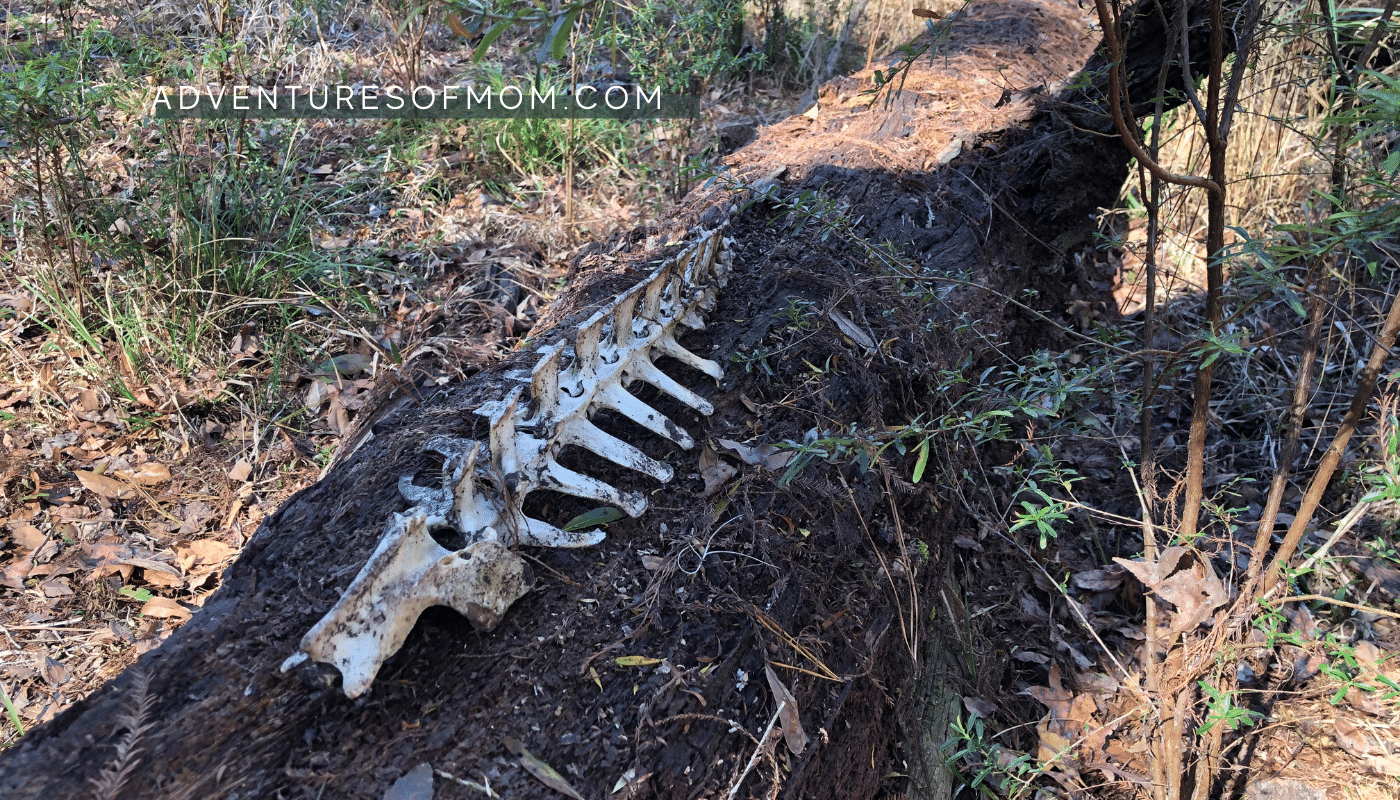 We stumbled across a skeleton on our hike through the woods at O’Leno State Park. What do you think it is?

All scenarios that ran through my brain could have been possible- except that the bones were sun-bleached and picked clean. The animal had been devoured long ago and the predators were long gone…perhaps. 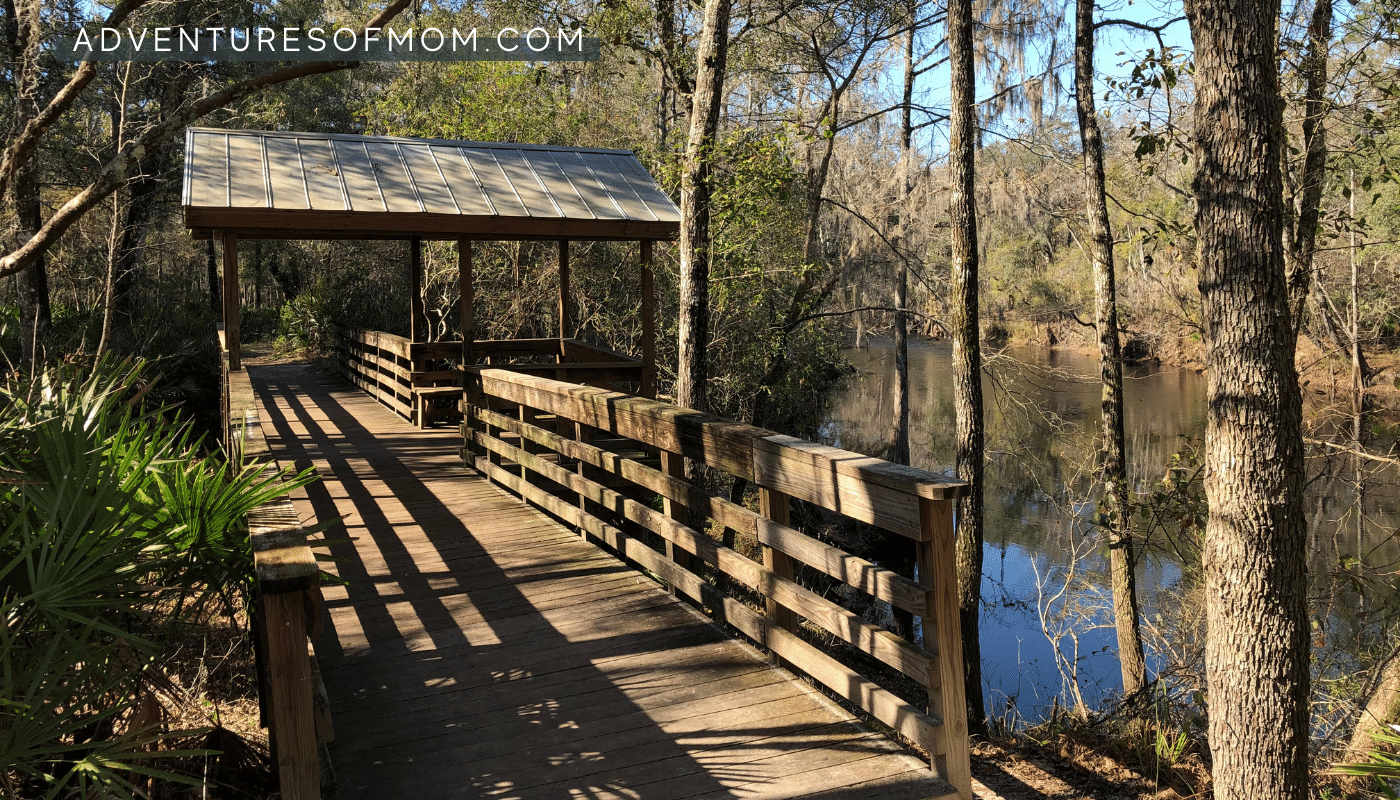 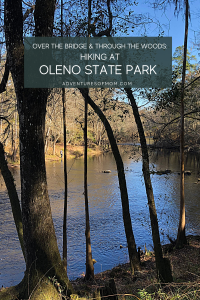