Family-Friendly Fun in the Southeast
You are here: Home / Adventures / Georgia Makes the National Geographic Traveler’s “Best of the World” 2017 Destination List 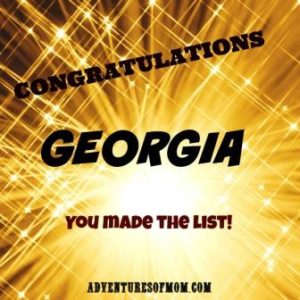 Georgia selected as one of the Best World Travel Destinations of 2017!

Georgia made the list! The entire state of Georgia was selected by National Geographic Traveler magazine as one of their 21 “Best of the World” travel destinations for 2017. The magazine is due to hit the stands on November 29th,   and this December/January 2017 issue has our favorite southern state among the likes of Cartagena, Columbia, the Via Dinarica Trail in the Western Balkans and Moscow, Russia. The 21 “Best of the World” travel destination winners fall into three categories: Nature, Cities and Culture. Georgia was selected for its rich music and music heritage.

The Georgia Tourism board promoted 2016 as “The Year of Georgia Music,” focusing on the diverse musical talent around the state, rich cultural festivals, and  the local music scene, from Newnan native, Alan Jackson; Monticello-born Trisha Yearwood to Olgethrope-born Gladys Knight; Philip Philips Albany native, Atlanta-based Usher, and many more. Georgia’s got talent and the world has taken note!

Kevin Langston, deputy commissioner of Tourism at the Georgia Department of Economic Development said: “We are thrilled that National Geographic Travel Editors picked Georgia to be featured on this highly coveted list. The “Year of Georgia Music” was a catalyst to bring greater awareness to Georgia as a music destination and our inclusion in the “Best of the World” as a site for great American music will surely attract even more visitors from around the globe.”

Thank you, National Geographic Traveler and congratulations to Georgia. You rock!

Looking for some music for your next Georgia vacation?

Here are some of our own Georgia music favorites:

‘Georgia (On My Mind)’ by Ray Charles – the official state song and good those for sultry Savannah nights.

‘The Devil Went Down to Georgia’ by The Charlie Daniels Band – for driving those winding mountain roads between Dahlonega and Hiawassee.

‘The Midnight Train to Georgia’ by Gladys Knight– Perfect for singing while driving I-75 through the heart of Downtown Atlanta.

‘Hard to Handle’ by The Black Crows (actually anything from this Marietta band is great!)- for interstate driving.

And of course, how could we forget the perfect road trip song:

“Cruise” by the Florida Georgia Line. Just because.

Inside Dahlonega’s Consolidated Gold Mine

Journey to the Edge of the World