Exploring Tom Sawyer Island in the heart of the Magic Kingdom 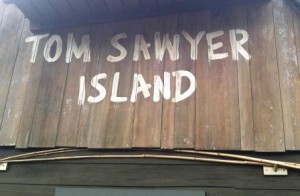 Smack in the heart of Walt Disney World’s Magic Kingdom sits a whole other land, an island actually, waiting to be explored: Tom Sawyer Island, and if you have kids needing to have some leg stretching fun, this place is for you!

Named after American writer Mark Twain’s famous Tom Sawyer character of The Adventures of Tom Sawyer, this island attraction, created by Walt Disney himself,  is only accessible by log raft from Frontier Land. Just the other day when we were visiting Walt Disney World’s  Magic Kingdom in Orlando, we hopped over to explore while waiting for our Splash Mountain FAST PASS time. And there was no line…… 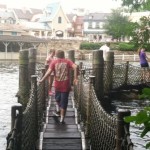 You don’t need to have read Mark Twain’s novel to enjoy this island. There are no wild rides here- or lines for that matter,  only paths that lead up and down and around a hill, oh yes, bouncy barrel bridge- (literally barrels floating on the water!), three caves to explore (one is Injun Joe’s cave from the story), the wooden  Fort Langhorn  ( with a couple of animatronic horses in the stable, a checker board & more), a playground for littler kids, two mills and many places with rocking chairs to stop and put your feet up. 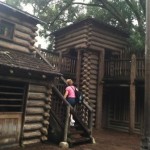 The kids clambered up and down the log fort, and escaped through the back tunnel just like I had in my youth.

My dad loved escaping to Tom Sawyer’s Island on my childhood visits to the park.  I remember stopping to rest and having a cold drink on the at the boardwalk café (Aunt Polly’s), with a view to Liberty Square and watching the steam boat rumble past. I hadn’t yet read the book, but had loved the 1973 movie version, so the little details, like the half- painted fence, were not totally lost on me. 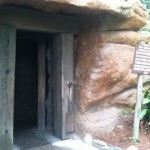 Tom Sawyer Island made a perfect in-park break in our day at the Magic Kingdom, allowing us adults relax while letting the kids roam free. So if you find yourself in need of a break, hop the log raft over to Tom Sawyer Island- there might just be a rocking chair with your name on it! 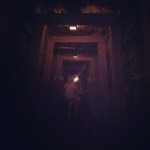 THINGS TO KNOW BEFORE YOU GO

1. You must be in the Magic Kingdom to access this cool island!

2. The log raft in Frontierland is the only access to the island. The depot is across from Splash Mountain.

3. The snack bar was closed when we were there, but there were two drink machines running. Also there are water fountains. We found one in Fort Langhorn and the other by the kids playground on the hilltop.

4. There are toilets in Fort Langhorn.

5. Mark Twain’s The Adventures of Tom Sawyer tells the tales of him and his friends, Huckleberry Finn and Becky Thatcher. Alternatively, you can always watch the 1973 film version of the story- a young Jodie Foster plays Becky Thatcher ( or do both!).