Family-Friendly Fun in the Southeast
You are here: Home / Adventures / Escaping an Attempted Abduction in Istanbul

Flashback Friday: How I escaped from an attempted abduction in Istanbul 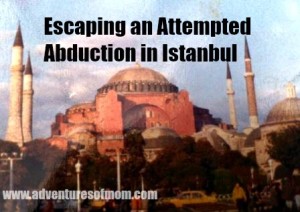 How I escaped an attempted abduction in Istanbul. Photo: Hagia Sophia, Istanbul

Today is the inaugural Flashback Friday story from my adventures BC (before children). Every Friday I plan to toss out a story from my travel journals to my dear readers, and perhaps some hard lessons learned along the way. I’m starting with a doozy from my early days: How I escaped an attempted abduction in Istanbul. Read on…

Twilight bathed the antiquated Turkish city of Istanbul; the minarets and mosques dotting the city skyline  melted into dark  towering silhouettes against  the autumn evening. My whirlwind tour of former Constantinople left me restless. I wanted to explore more of this foreign place. I had just seen my two backpacking friends off on a train bound for Bulgaria and I had a number of hours to kill before departing on the train to Thessaloniki.

I was still a newbie backpacker at this time, but the world was a wondrous amazing place begging to be explored, so I checked my bag out of the train station, as they were closing for the evening, and left it at a recommended Left Luggage place around the corner, run by a pair of young Kurdish University students. Then I set out into the encroaching night.

Darkness fell upon Istanbul, countered by the neon lights of the city. It had rained for a good part of the day, and now those electrically illuminated sparkles  danced across the wet pavement. Kebabs for Sale, Money Exchange,  Rooms for Rent, Coffee.  My feet took me past the bright lights around the Bosphorus waterfront and back to the Grand Bazaar, where I had gotten lost in the labyrinthine streets and stalls that dated back to the 1400’s, with my friends earlier.  But at night a market is quite a different place. Shadows stretched across the darkened shops, cafe’s crowded with men spilled out into the aisles and the smoke of the hookah pipes clouded the air.  Sounds of music wailed from worn boom boxes, distorted and loud. The night life of the Grand Bazaar unnerved me. Too much darkness for a single gal. I opted for the more inviting  gypsy market set up outside the official Grand Bazaar walls, to score some final souvenirs instead.

Eventually I headed for the Galatia bridge. I had read about it in a gothic novel (Phyllis Whitney’s “Black Amber”) when I was younger and I wanted to set foot in Asia, just to say I had been to Asia ( I did say I was a newbie).  On my way across the bridge, a man in a tan trench coat grabbed me by the upper arm, tightly.  My first thought was: What the heck! I spun around to face the tall, burly stranger (I’m barely passing 5 foot so everyone is tall compared to me).  My mind raced a mile a minute with things like: I don’t know this person, wow- what a giant mustache, and why would someone try an kidnap me on a bridge?

And  then, without forethought or warning (to myself included),  I started screaming- screaming every single curse word that I had ever learned- in Greek. This drew attention- lots of attention, (Turks and Greeks were notorious enemies, but it may have just been my screaming). A crowd of people began to gather. Startled, my would-be abductor released my arm and quickly vanished into the crowd. I was baffled and shook up. I spoke no Turkish and I was alone in Istanbul. I can’t remember the trench coat man actually speaking. Being a chilly October evening, there were many people wearing coats, trench coats included, and the majority of Turkish men seemed to sport those giant mustaches, so he looked exactly like everyone else: the proverbial gray man. But seriously, why grab someone on a bridge? Where would you go? Over the side? To an awaiting boat bound for Egypt? Or was he planning to take me home to add to his collection?

I finished crossing the bridge, and stopped to admire the fresh catch that had just been delivered to the docks from a fishing boat , and drew another crowd, though it was possible they were the same people from the bridge and  just wanted to see what the crazy little blond girl would do next. In the end I headed back to my  Left Luggage shop and had a long discussion with the two students about Istanbul, politics and people disappearing. This area of the world was known for it’s human trafficking, apparently. And people vanished. They only find out about the ones who have friends or family actively searching for them, so the real statistics of missing persons was (and still is)unknown.  Before long I was on the train headed for Greece, a little bit wiser, a littler older, and a heck of a lot more alert.

To this day, I have not a clue why I started my cursing tirade, in Greek no less, but am grateful that some survival mechanism kicked in.

Be smart. Don’t become a statistic.

Previous Post: « Why You Need to Live Your Dreams Now
Next Post: Creating the Perfect Slushie (Recipe Included) »