Family-Friendly Fun in the Southeast
You are here: Home / Adventures / Celebrating Greek Easter in Corfu 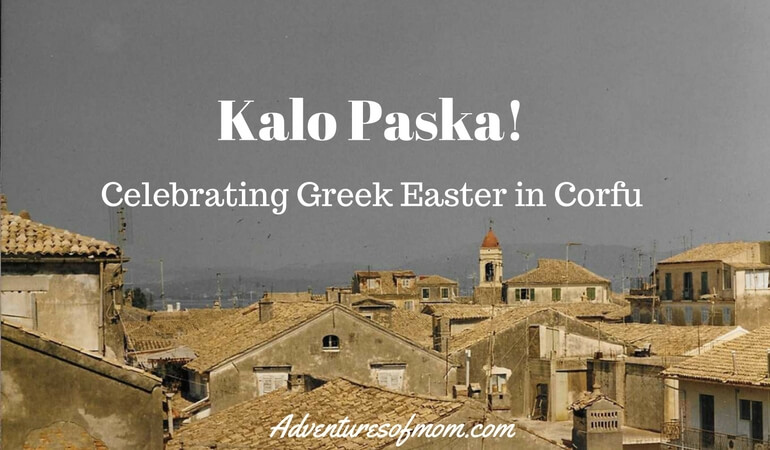 Greek Easter in Corfu: Celebrating Easter on a Greek Island

Known for the best Easter in the world, Corfu was the first place I ever celebrated the spring holiday. Whereas some cultures put an emphasis on Christmas, in Greece, it’s all about Easter. But forget about the plastic eggs filled with candy and the bunny who delivers gifts, the Greek Easter, the main Orthodox holiday, is all about family, food, community spirit, and the celebration of the resurrection of Jesus Christ. 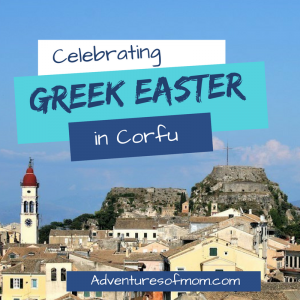 The Greeks take their Easter seriously. They’ve been prepping for 40-days out, forgoing meat and even makeup and chocolate for Lent (apparently the make-up and real chocolate have animal by-products in them-ew). Before the onset of Lent in Greece, people go a bit wild for Carnivale (a Mardi-Gras celebration without the beads), dancing and eating and bopping each other on the head with soft plastic bats – yes, I thought it odd too. Carnivale lasts for a month (Saturdays), each weekend getting crazier until the final crescendo- parades, feasting & bat-bopping.

After the Carnivale celebrations, they celebrate Clean Monday, also known as Kite Flying day- when everyone heads out of town for picnicking and flying kites on Mount Pantokrator- the highest point in Corfu. Lent has begun and for 40 days, in honor of Jesus’ 40 days of fasting & meditation prior to him beginning his world-changing ministries, they may give up drinking, or more commonly, meat, until after the midnight Easter service. 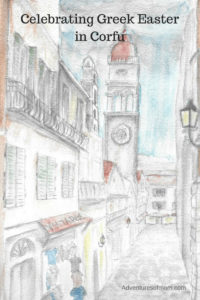 original artwork by yours truly 🙂

Lots of parties- get-togethers going on- but it’s more of a somber mood. Most devout Greeks are still forgoing meat, so there’s a lot of vegetarian dishes and seafood, like shrimp on offer. Various bands march up and down the streets in the old town.

The bones of St. Spyridon, patron saint of Corfu, are paraded through the old town. St. Spyridon has been keeping the island safe for centuries. This is one of the few places not ever occupied by the Turks during the Ottoman Empire era. The locals say when the Ottoman Turks launched an invasion for Corfu, a great storm rose, courtesy of Saint Spyridon, keeping them away, and the island safe. It is traditional for families to name their first son after the island’s patron saint, so Spyros (Spiros) is a common name on Corfu.

A Corfiot tradition, this is the time to chuck an old piece of crock ware out of the window to symbolize out with the old and in with the new- the spring theme. But the real action happens down around the Listons in Corfu Town, where the residents drop massive terra cotta pots from their balconies to smash on the street below. Watch your head! The pot throwing all takes place at the same exact time 11 am and I heard that was also when the butchers on Corfu slaughtered the lambs to be eaten on Sunday- as no one would hear their screams through the pot-throwing celebrations – ugh. Is this true? If so, that would give a twist to this unique Corfiot custom.

One year I witnessed someone accidently drop a large urn before the 11 o’clock appointed time- and everyone else three their pots down after it- ringing in an early spring!

Everyone heads back to Corfu Town later that night for the outdoor service in the Platia ((Platia Leonida Vlachou). And under the canopy of the Judas Trees that surround the plaza (yes, I see the irony there), the crowd gathers to hear mass under the stars. Parking is impossible and for years I hiked miles from the south end of Garitsa to reach the platia.

Everyone carries a candle to the service- there are vendors selling them along the way if anyone forgets theirs. Some have handy drip guards so you don’t get hot wax over you. Some people carry hard boiled eggs dyed a dark red color as well- no other colors- just that same dark red(more on that later).

My first Easter in Corfu, the platia (plaza) filled with people. The balconies around the platia overflowed with bodies. The bishop and a large entourage of important religious and political figures walked in a long procession from the church and down the narrow lanes between the houses and into the crowd-filled square. I even saw the Greek Prime Minister there one year.

There were no police guarding these guys. No ropes lined their promenade. Everyone moved out of the way- courtesy ruled. The Bishop mounted the steps to the gazebo in the center of the platia and all the lights in town were extinguished completely as the Bishop began the solemn service. He lit his candle, then leaned over and lit the candle next to him with his flame. That person lit the candle next to him and so on, so that everyone’s candle that night was lit via the Bishops flame- symbolic of spreading the Holy Spirit through the masses.

In that candle lit square- alone a beauty in itself, at midnight came the culmination of the service and the Bishop announced loudly: “ Kristos Anesti!” Christ has risen! The huge cross on top of the old fortress blazed with blinding lights and fireworks illuminated the heavens above it. As a result of the noise from the fireworks- all the car alarms around the platia in Corfu Town went off simultaneously, adding to the midnight raucous. An awe-inspiring and moving experience even despite the car alarms.

All around people hugged one another (like after the New Year’s Eve countdown), crying “ Kristos Anesti.” They took those hard boiled red eggs and cracked them against someone else’s and whoever egg cracked got to eat their egg. The red eggs symbolize the blood of Christ – that’s why they are all and only red, and the cracking symbolizes Christ’s resurrection. Rebirth- reborn.

After the service, everyone headed off to the local restaurants or parties to break their 40 days of forgoing that meant or drink.

The Corfiots like to break their Easter in at midnight with Tsilikourda- a traditional Greek soup made of sheep intestines and lemon. Of course, I had to try it- once! It has a slimy, soft texture that slips down your throat. Said to be easy on the stomach, I think it’s an acquired taste myself (one I haven’t acquired), it’s made fresh in the households just for this occasion. The real feasting begins the next day.

With the festivities in Corfu Town over, Sunday is the day of family and feasting. Lambs are roasting over open fires (and some goats as well) and family and friends get together for a celebratory day. Greeks are gregarious, and if you don’t have plans, you may find yourself given an impromptu invitation to a family dinner.

Tables are set up- outside- the smells of food fill the air. Tzatsiki (garlic, cucumber, and yogurt dip), Taramosalata ( a fish roe bread dip made with old bread), Dolmades (grape leaves stuffed with rice), fresh boiled horta (greens) drizzled with lemon, Skordalia- garlicky mashed potatoes, slow roasted potatoes- the feast is endless and the local village wine flows freely. It’s an incredible feast that would show and awe even the hardcore epicureans.

About the Saturday Mass 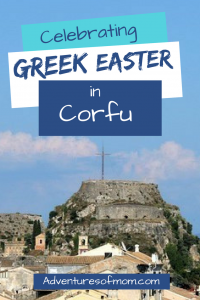 Though the service itself has not deteriorated through the years, the atmosphere in the crowd has- no longer is as respectful and treating the event as revered as it once had. Not everyone turns off their lights for the service. People now light their own candles with their lighters. Kids throw popping fireworks on the ground- it has adopted more of a crazy chaotic atmosphere, and with a teaming mass of people gathered in the area at close quarters- it can be downright scary. I was lucky to have friends on one of those balconies overlooking the platia who began inviting me up for a more elevated view of the service. It’s been interesting (and sad) to see the transition of Greek Easter in Corfu, but I feel blessed to have experienced the old traditional celebrations and carry the memories from a Corfu past.

More Posts That May Interest You: