Family-Friendly Fun in the Southeast
You are here: Home / Adventures / Canoeing the Withlacoochee River

A holiday weekend had come upon us. We headed out with the intention of canoeing the Rainbow River in Dunnellon, but by the time we reached the bridge, there were more tubers hanging out at Blue Run Park waiting for the shuttle back to the KP Hole then residents in the small Central Florida town, with more bright yellow tubes bobbing along  up-river like bumper boats, bouncing off one another in the rubber tube crush.

Living in Florida, we get used to the swelling summer crowds at the swimming holes and  local attractions, and we learn: like never go to Disney World with the summer tourists when you can walk onto rides in October, and stay away from the Rainbow River on the holiday weekend! We drove away from the Rainbow River and headed into a deeper, darker, crowd free area of Florida that only the true adventurous and fearless dare to explore: The Withlacoochee River.

Like a Yin and Yang dance of koi fish, the black swamp waters of the Withlacoochee River sashays up to the contrasting clear spring fed Rainbow River where they join in Dunnellon to dance together into Lake Rousseau and out to the Gulf of Mexico. The kids and I had already went canoeing on the crystalline  Rainbow River, so it seemed almost fitting that we were heading it to the yin side of the two. 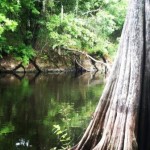 The Withlacoochee starts in the Green Swamp and wanders 157 miles to the Gulf of Mexico, one of the few rivers in the world to run South to North. Paddling the river end to end would take up to a week, but most people do day trips. We put in at Grey Eagle Park off of E Withlacoochee Trail, but there are many places to start your Withlacoochee Adventure. Heading upstream under the Highway 200 Bridge and past Stumpknockers Restaurant on the river, civilization soon gave way and we entered the heart of darkness. Literally! 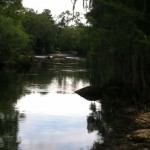 We encountered small rapids and rocks canoeing the Withlacoochee River.

Huge cypress trees, some hundreds of years old, stood as sentinels of time over the black river, boughs bowing over to blot out the sun, their knobby knees protruding along the banks and  telltale watermarks  tattooed across their trunks,  signs that the river often rises high,  flooding the banks to create one big dark swamp. Rocks jutted out from the river bank, reminding me of our adventures in North Georgia. This was not the sand hill Florida that I knew. These were the hunting grounds of the original native Indians.  A dugout canoe would not look amiss in the swampy landscape and neither would  the Seminole Chief Osceola. 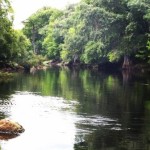 We canoed the dark waters of the Withlacoochee River.

An earthy smell hung low over the landscape, rich and dark, impenetrable by our twenty-first century. This was the river that time had forgot, and it smiled that lazy toothy gator smile of the south.

My son insisted on paddling- but it was more like battling against the strong current. An airboat sped past and a fishing boat, but other than that, we were well on our own, the other families preferring the less intense Yang Adventures in the clearer Florida springs. 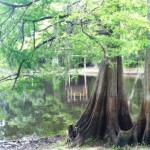 It was much easier floating back with the current and our adventure ended too soon.

1. If you don’t have a canoe or kayak, you can rent one from one of the local outfitters. By law you must have lifejackets for each person and one whistle on board.

2. Always go up river first, so when you tire yourself out you can just float back!

3. Hydrate! Yes, you are on water, but it really is black! (Okay, some areas are more dark tea colored) Bring your own to drink.

4. You can grab a bite to eat afterwards at Stumpknockers by the bridge over the Withlacoochee on Highway 200 (late lunch-dinner)  or further down, try REDs (breakfast and lunch only), both popular local eateries. 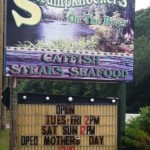 Stumpknockers on the Withlacoochee River