Family-Friendly Fun in the Southeast
You are here: Home / Daily Life / CANNING PEARS: WHAT TO DO WITH FLORIDA SAND PEARS

Canning Pears or What To Do With Those Florida Sand Pears 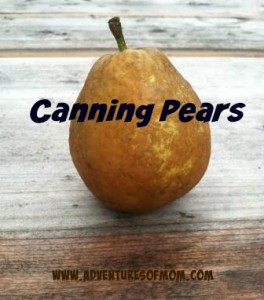 The Florida Sand Pear won’t win any beauty contests next to the gleaming apples and sparkling grapes.

I’ve been busy tending to the garden, prepping it for the lovely winter greens to come, coddling the chickens and treating them to not only grub worms, but also to romantic crooner Sam Smith. The hens love it. The rooster is not so sure. He doesn’t like his gals swooning to anyone but him! There was a single fruit tree in our front garden, heavily laden with fruit: the Florida Sand Pear. I had a sneaky suspicion it’s named Sand Pear because it actually will grow in our unfriendly sandy environment! It’s hard to know when Sand Pears are ripe, but as soon as the squirrels started nibbling on them, and chucking them to the chickens below, I knew it was time to pick them or I would be nursing a concussed hen.

Florida Sand Pears are not known for their beauty. In the world of fruit, they tend to get pushed into the back row, well behind the glistening Macintosh Apples and sparkling Navel Oranges.

In fact, most people faced with a Florida Sand Pear really don’t know what to do with it. People have even chopped down their tree, thinking they have diseased pears- no, just ugly pears, but beauty in this fruit’s case is under the unsightly mottled flesh. Once you peel away the brown and yellow, this pear is simply a naked apple, and can be treated as such. 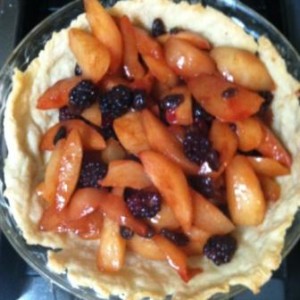 The past couple of weeks I have been treating the kids to pear tarts ( my cooked pear slices in puff pastry & baked) and pear pies- it tasted just like an apple pie! And of course, I have been putting up cans of pears to be eaten (or given away) through the colder months. 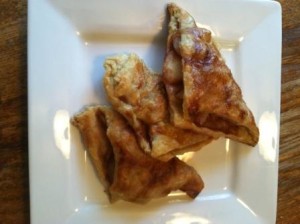 Canning pears is easy. Wash and peel the pears (the chickens get the peelings), cut away any bruised areas and slice like an apple, discarding the core. Sprinkle a bit of lemon juice over the slices and place in a pan with a cup of water, sugar & cinnamon to taste. I tend to go lighter on the sugar but don’t even measure it out any more. A potful of pear slices(10 pears) gets a cup of sugar. The hardest part is making sure all of the jars are sterilized and the canning lids (I boil the lids in water as I am canning). Then add the pears to the clean, hot & sterile mason jars, (use a wide mouth funnel)making sure the rim of the jar is clean and put the hot lid on (with tongs so as not to burn yourself), screw the lid on- not too tight, process in a boiling water canner for 20 minutes (pint), 25minutes (quarts). This should seal the lids (suck them in solid in the center). If they are not sealed and you can still press the center in, then you can just refrigerate them and eat within the next two weeks. 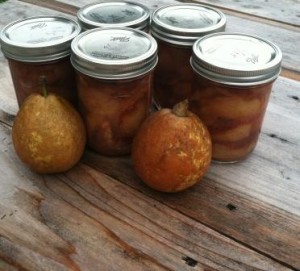 Even if you are not into canning, the cooked Florida Sand Pears are great topped with cottage cheese, baked in pies, tarts (in puff pastry) or fritters (fritters are deep fried, my husband told me, so I have been making tarts), or when hot, topped with vanilla ice cream. The cooked pears are great on top of pancakes, stuffed into crepes and even folded into the pancake batter and cooked, German style (apple pancakes) like we had in Helen, Georgia at Hofer’s Bakery. Yum! Don’t forget the savory options too- like chopping them up and adding them on top of pork chops. The uses are endless! You can even use them as a side to your meal! So before you are ready to by-pass that ‘ugly’ fruit, think twice. The Florida Sand Pear just might surprise you. 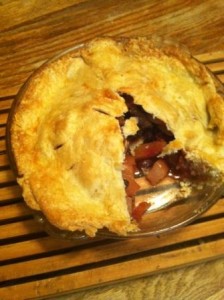 Let them eat pie! Sand Pear Pie, that is! Use the same filling as for canning the pears. You just need the pie crust!

Other Pear Preserving Recipes: (Not mine)

The Prairie Homestead (a sugar-free recipe): 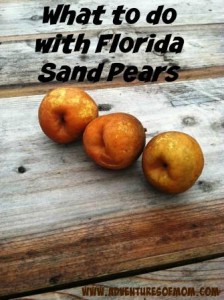 What to do with Florida Sand Pears