Family-Friendly Fun in the Southeast
You are here: Home / Adventures / Camping in South Florida: A Flashback Friday Tale

Camping out in South Florida: A Flashback Friday Tale 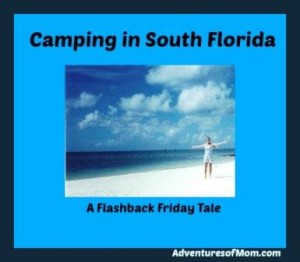 We car-camped in the Keys. Days were spent on the beautiful beaches, and the nights on Duval Street.

“I’m just a lone wolf. I don’t really need anyone. And there you are, a pretty girl, all alone too, on this starry night…” – Not a cheesy daytime soap, but overheard in the garden of the International Youth Hostel in Homestead, Florida.

I have had camping on my mind lately. I have never really been camping before. Sure I’ve slept outside a lot- yeah, and I mean a whole lot! That whole month of Inter-railing (Euro rail) in Europe, I think we only slept in a bed a couple of times- Nice, Hamburg and Corfu. Then there were those other times, like an impromptu night under the stars on a beach in India, beside a bicycle rack by the train station in Amsterdam, on the decks of many ferry boats and even on a few rooftops in Morocco.  I must confess that I have never packed a tent or began with the intention of “sleeping out,” it kind of just happened. And then there were those camping experiences in South Florida… Camping in South Florida is today’s Flashback Friday Tale.

I car-camped in the Florida Keys with a pair of friends- it was that road trip to Mexico that went astray, as free-spirited road trips do. We stopped off in New Orleans for Mardi Gras, and then heard there was Bike-Week happening in Daytona Beach, and the next thing we knew, bam, we were in Key West during Spring Break! Our days were spent on the beaches, our nights hanging out on Duval Street. We were there to party. Really, do young people come to the Keys for any other reason? But the Florida Keys police were not as friendly as the New Orleans group, and our car camping in paid parking was not as tolerated. Move on- move!

So we found a little campground, somewhere near the No Name Bar (hard to forget a name like that, but can’t remember the campground name!), and we car-camped. The showers were nicer than the cold ones on the beach, and less, er, public! Nothing like sudsing up in full view of the beach, eek! We tried to pick coconuts and eat them- but them me tell you, those dang things are as hard as rocks! It was impossible to break into them. I had renewed respect for that guy who stood on the docks at the end of Duval Street. He would throw a coconut in the air and slice it in two with a machete, just for the tourists. It was no wonder he had such muscular arms! We also tried crabbing. My friend’s boyfriend caught a crab on a fishing line and threw it onto shore, yelling: “You two girls just grab it. We’ll eat crab tonight!” The moment the spidery-looking blue crab scuttled on the shore, we took off running and shrieking. (Okay, we laugh about it now, but we were living on luncheon meat then, and a blue crab would have made a tasty meal.)

Years later, it was no surprise that I  once again headed towards Key West. The Keys were calling! There were four of us packed in my sister’s car, with the intentions of partying in Ernest Hemingway’s old stomping grounds to break in the New Year. Of course with New Year’s Eve looming up ahead, everyone else had those same intentions! Our journey had begun from Orlando and our little quad arrived in Homestead in South Florida late the day before New Years Eve.

Homestead, once a thriving farming community, had been swept away by Hurricane Andrew in August 1992, and it had not quite recovered. There were a few new motels slapped up on the main drag and some gas stations, but that was about it. We rolled into town and had an authentic tamale dinner in a diner that had survived Andrew, and then we hunted for a place to call home for the night. Everywhere was booked solid- everyone else was headed for the mega-street party in Key West too, apparently.

The International Youth Hostel was ready to shut it’s door when we begged for a room. They were packed out, but, they told us we could camp in the garden out back. My sister had just begun her hiker-lady career, and she had thoughtfully stowed tents in her car. (Honestly, a sleeping bag is all the  camping prep gear I ever carried-ever!) Years later, I am still wondering why she had so many tents in her car! (3) . But with her help- actually she did it all, clever girl ( I think I just impeded the process with my obvious inexperience), we had three tents slapped up in the garden.

It had been a very long day, and was after midnight already, so we said our goodnights. My tent was the size of my sleeping bag- small but efficient. I crawled into my little cocoon and tried to sleep when I heard a guy say:

‘I’m just a lone wolf. I don’t really need anyone. And there you are, a pretty girl, all alone too, on this starry night…’ Then the guy went on and on chatting up this girl who barely said a word back. Was she mesmerized by him? His voice sounded like Jim Morrison from the Doors- very hip, maybe high, and definitely hitting on the girl.  It was like listening to a corny (bad) daytime soap opera radio program. It was amusing. It was downright funny at times. To the writer in me, this was fabulously entertaining fodder!  Would he get the girl? Or would she see through his cheesiness and return to her own bed, alone?  When she finally found her voice, they bantered back and forth for a very long time- him with some mega-lengthy monologues, her with short replies, and at one point it looked as if he was swaying her, and then… unfortunately, I fell asleep before I ever found out!

I rolled out of my little camping tent early the next morning, bleary eyed, and headed inside for a shower. Was this camping? Did that count as a camp out? Where was the camp fire, the fireside tales and the s’mores? We dismembered our tents back to their little pocket-sizes and loaded them back into the car. Key West beckoned, and there was sure to be eggs and coffee somewhere along the way- or conch chowder. There’s always conch chowder in the Florida Keys.

Have you ever camped out? Was it planned or impromptu?