Family-Friendly Fun in the Southeast
You are here: Home / Adventures / Cades Cove: Exploring the Valley Hidden in the Smoky Mountains

I’ve been hunting for bears for years- not with a loaded weapon, mind you, I just always hoped for a glimpse of that ginormous forest creature on our wooded wanderings, but to no avail. We would arrive just as a bear left, or hear about the bear that passed after we had departed. After the bear at Homosassa Springs high-tailed it to the back of the enclosure as I strode up, everyone was convinced it was me- I was bear repellant. The subject of spotting a bear now brought forth fits of giggles from my kids. I had come to the conclusion that seeing a feral bear (or even one in a zoo) was not in my cards. And then we went to Cades Cove, high up in the Smoky Mountains National Park- a place notorious for bear sightings…

Guess what? I finally saw a bear! Well, sort of. It was just the head- that bit of black fur on top. Okay, so I saw the tip of a bear’s head- in the wild. Finally.

Yeah,  so our bear sighting in Cades Cove went slightly askew. One minute everyone yelled “bear” and next thing you know we were jostling each other for a glimpse of the majestic creatures and then oops. As I was moving my head to try and see the bear, my husband held up his phone to snap a picture- and kept moving it- totally obliterating my view- aside from that tip of the head (he didn’t even get a photo in the end!). Our son had opened his window (he was seated behind me) and hauled himself up, to take a photo from above the car and then my husband started to drive away. Hey hey! Our son’s hanging out of the car! The bears trundled off into the woods by then, impatient that we silly humans couldn’t take a decent photo. 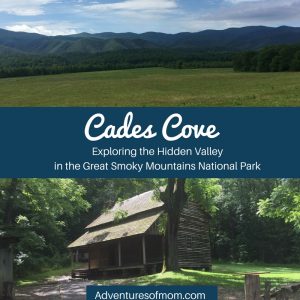 Our daughter remained quiet as we drove on, each recounting our epic fail bear sighting tale. The dark forest gave way to an open pasture overgrown with wild flowers.

‘There were three of them. I saw them all,’ she said, sitting up a little straighter in her seat. I’m sure she was choking back a smug laugh as well. It was an early summer’s day and we were in the Great Smoky Mountains National Park, driving the 11-mile one-way motor trail loop through Cades Cove. 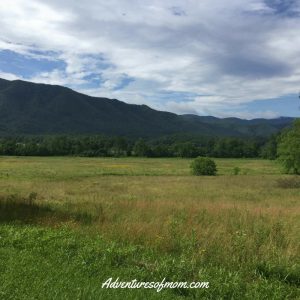 Hunting for wildlife in Cades Cove

I’d heard stories about the Cove. Visitors often saw bears. Any art gallery you walked into had a bear photo or painting- all that were taken or inspired by bear sightings in Cades Cove. Friends would recount wonderful tales about the time they were in Cades Cove, renowned for majestic beauty, mountains, wildlife, and a prolific population of bears, all hidden in the heart of the Smoky Mountains.

Coming from Florida, a cove usually means a harbor of some sort, protected by land or jetties- a safe place to moor a boat during a storm, but the road to Cades Cove began in Townsend and headed up- up and up. We drove past hiking trailheads, past scenic pull offs and just kept heading up, a winding, dizzying road. At one point we even went through a tunnel in the mountain. This well-maintained road, a two lane, wasn’t narrow like Roaring Fork, and traffic buzzed on it as if people were headed to work, not touring the sights of the Tennessee’s Smoky Mountains. There seemed to be no one, other than myself, intently scanning the forest for a large dark furry form. 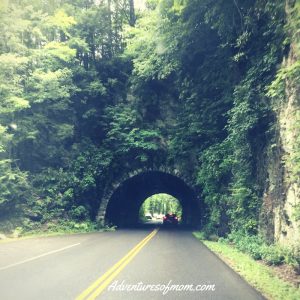 We drove through a tunnel on our upward climb to get to Cades Cove.

We finally reached the campground area and beginning of the one-way loop. They say it can take 2-4 hours to drive 11 miles. I was expecting hairpin turns (there were only 2 of those). We drove past a pasture- the kind we’d see at home. No bears. There were wild turkeys in the field. The kind we see at home. Nope, no bears. Cars stopped to take pictures of the turkeys. Further on the road, we entered a wooded area. Deer paused from their breakfast to stare as the cars stopped to watch- and take photos, presumably. A long line of cars stopped up ahead and it must have taken 10 minutes to reach a few hundred feet, inching and stopping, inching and stopping. It was like Christmas shopping traffic.

A long line of cars stopped up ahead and it must have taken 10 minutes to reach a few hundred feet- and we soon found out why- the bears. Everyone stopped for a minute or two ahead of us to take their photos and ooh and aah over them- One truck pulled over and a photographer climbed into the back and snapped away. I could see him clearly. So we had to ease our car around the truck and that’s when my husband saw the bears. You know the rest of the story.

The Hidden Valley in the Smokies

It wasn’t until we left the traffic snarl up behind and drove back through more grassy pastures that we saw the mountains around us. I realized this cove was actually a valley, set high in the mountain range.

Cherokees used to hunt in these open lands. It was that very view of lush abundance that brought European settlers to the cove in the early 18oo’s. High in the mountains, hidden in their secret valley, they built cabins, raised livestock, and grew crops, with the top peaks of the Smokies guarding them.

Now the pastures grow wild flowers, but the homesteads still stand, beckoning the curious. Farms, churches, and even a cemetery. And because of the vast open spaces, Cades Cove provides a prime location to spot black bears munching on tasty berries (er- so everyone tells me!) and deer roaming free. We heard from a local source there are even elk here now- though rare to see. 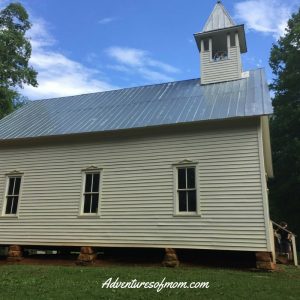 One of the churches of Cades Cove

Like the Roaring Fork Motor Nature Trail, the loop road around Cades Cove offers pull-offs for scenic views and homesteads and a visitors center with toilet facilities and trailheads at the halfway point at the Cable Mill area. There’s a 5-mile roundtrip hike to Abrams Falls there too.

The Cades Cove loop can be experienced by car, hiking or on foot, and you don’t have to do the entire 11-miles either, as there are two short cuts to loop back earlier- but you do miss the mill. 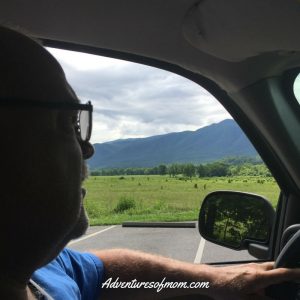 We stopped at the campground on our way out- the last toilet break until we reached Townsend.  Their fully stocked store had bicycles to rent and t-shirts that said ‘I hiked the loop.’ I knew we would return- perhaps in a cooler month when autumn painted the foliage, and maybe next time I would see a whole bear, or maybe even a nose. And an ear. Okay, stop laughing, guys!


Things to Know Before You Go: 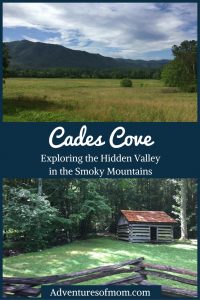 Have you ever visited Cades Cove? What wildlife did you find?

More Posts You May Enjoy:

Previous Post: « Surviving the First Day of School (in a New School)
Next Post: An Epic Total Eclipse of the Sun is Coming! (Are You Ready?) »