Family-Friendly Fun in the Southeast
You are here: Home / Adventures / Adventures of Mom: Sunset Sailing in St. Augustine

When I was young, I dreamed of sailing on a Windjammer Barefoot Cruise, those tall sailing ships that cruised around the Caribbean in the 1980’s. My parents were not the sailing or even boating type, so it wasn’t an inherited gene.  I’m not sure whether it was because I  wanted to be a pirate when I was little and the Windjammer ships looked like pirate ships to me, or because it was the idea of hanging out on ropes, not wearing shoes and letting the wind carry me to places exotic and unknown  that sounded like the ultimate dream adventure. Either way, I managed to get hold of a Windjammer Barefoot Cruise brochure and tacked it to my bedroom wall between a poster of France and a photo of a castle in Germany. It was my own personal vision board long before vision boards were cool.

Needless to say, I did go to France and saw that castle in Germany, but the Windjammer Cruise had eluded me. In Greece I sailed on a tiny sailboat around the Corfiot coastline, and even attempted a flotilla race with my then partner, but the lack of wind, or more probably, our lack of expertise landed us out of the race before it had barely begun. So fast forward to two tween-teens later and back in the states, I found myself planning a quick trip to St. Augustine. We had been many times before. We had explored the fort, Ripley’s, St. George Street and even found a ghost in the cemetery on our last stay, so I was in search of a different family adventure. I contacted the tourism board and a kind lady gave me a list of family adventure suggestions. The first one on the list was sailing.

We are a water family: swimming holes, snorkeling, fishing. We’ve boated, canoed and even started kayaking, but as a family, we have never sailed together, so I thought, okay, this sounds kind of neat.  I checked the website of the Schooner Freedom,  thinking it was just your run of the mill sailboat and then I saw the photo and the words: tall sailing ship. I had found a mini-version of my dream Windjammer Cruise. 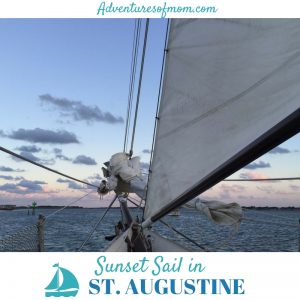 The Schooner Freedom offers day and sunset sails. I took a vote and everyone chose the sunset cruise. I made the reservations (and you DO need to make reservations, because it fills up fast), and off we went. You can check out our sunset cruise in our latest YouTube video.

Our crew consisted of Ryan and Avery, with John as our captain. And yes, the first thing I though of was that Kurt Russell movie: Captain Ron (very funny, must see movie), but our Captain John had no eye patch and thankfully didn’t dock his sailboat in the same manner as Captain Ron. We all sat on deck, and our cruise was full of couples celebrating birthdays, anniversaries and treating themselves to a sail for other special occasions or none at all. They served drinks aboard: wine beer, water and soft drinks, but no food, but for the two hour sail in Matanzas Bay, that was enough. Avery and Ryan handled the ropes and served the drinks. There was a cabin below with a head (toilet) with rather complicated instructions. I decided not to use it, and thankfully the kids didn’t either, because there was pumping and other things involved that I didn’t quite hear.

Once they cut the engine and hoisted the sails, we had only the wind’s power to carry us and it was incredible. (I am so easily awed!) We sailed under the Bridge of Lions and out into Matanzas Bay over to Vilano Beach, which Ryan told us was a great place to find shark’s teeth (we went the next day and yes, found shark’s teeth!). The sun setting was only the beginning, as afterwards, the pinks and purples lit up the sky. We raced a private sailboat for a while (and won) and headed back as night fell across the ancient city.

Later I dug up the history on Windjammer Cruises. Apparently the company went bust, but then some fans of the cruises got together and boat a sailboat and restarted their favorite cruises themselves.  Check out the new Windjammer adventures on their website.

Other Stories That May Interest You: